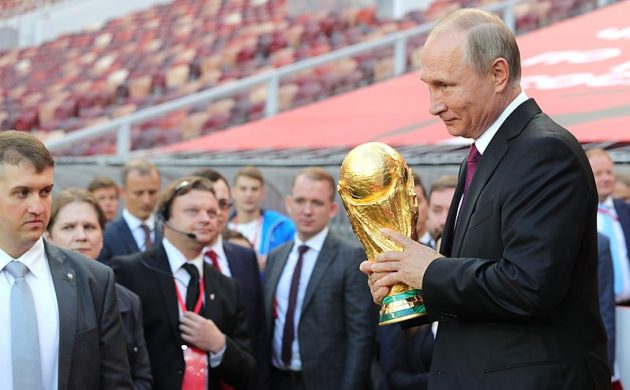 Every day we hear reports of Russian threats, sanctions and cyberwarfare, but all of these will be forgotten for a month as the 2018 World Cup takes precedence.
The Danish team have already embarked. As always, the nation harbours great expectations. Since Denmark won the European Championship in 1992, nothing seems outside the scope of our hopes.

Their journey is just another shuffling around of athletes. On a daily basis, most of the players are distributed internationally. Hardly any country has more than a few players from their national league, but over the next week or two they have all been called home to form their national teams. Cristiano Ronaldo goes to Portugal, Lionel Messi to Argentina and Christian Eriksen to Denmark.

Russia is apparently doing a great deal to tighten security and a massive effort has been made when it comes to investment in infrastructure, so President Vladimir Putin may not end up seeing his team win, but could very well win a public relations battle – arguably the victory he covets the most.

Underdogs to the fore
In our hearts and minds we will suspend the troubles of the world and enthusiastically support our teams. The good thing is that it gives the lesser footballing nations a chance to make themselves known.

We still remember years ago when the brave fighters from North Korea caused a sensation by competing as if their lives depended on it. Indeed, it was said that they were told to win and shine, or lose and risk disappearing into oblivion. The summit in Singapore on Tuesday was another highlight in the history of North Korea – it was certainly unexpected.

Not least we are looking forward to seeing teams from Africa take their rightful place among the great nations. Nigeria, for one, is a formidable football nation. Maybe national pride in some of these countries could inspire the migrants to make it their home instead of risking their lives – and money – on the risky journeys north.

The great unifier
Although everybody is convening in Russia it seems that the more affluent countries are closing their borders and making integration difficult for those who made it this far. In Denmark we are heading towards the 100th legal tightening-up measure over the last four to five years.

Unfortunately it does not seem to be stopping this side of the next general election. Only Radikale is holding out for a more liberal attitude than the austerity demanded from the majority.

However, the World Cup and the united world of football fans may hold out hope for general and mutual respect and friendly get-togethers when the jubilant support during the games is over.

We are proud that Danish fans in France in the 1980s were nicknamed Roligans (easy-goers) – not Hooligans. We lost then, but now we are going for it – and so is everybody else.

So forget the world and enjoy football, which so far is the biggest unifier of all.