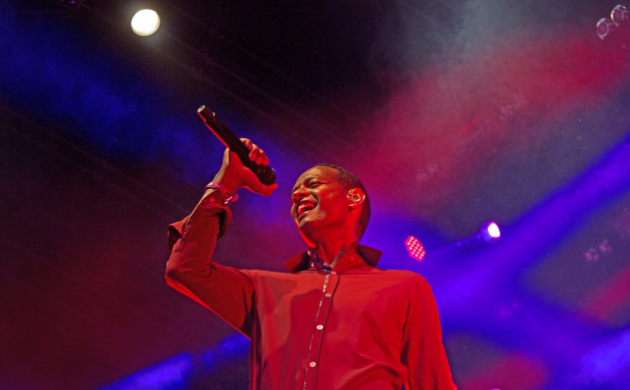 Dedicated and partisan is the crowd that shows up to see a World Music band perform on one of Roskilde Festival’s stages an hour before hip-hop legend Eminem plays on the Orange Stage.

Multifaceted and truly international
Indeed the chances of a massive turnout for a show featuring an Ethiopian pop ensemble with a multifaceted, truly international cast of musicians on the Avalon Stage in the wake of the aforementioned headliner weren’t good from the get-go. Not to be deterred from staking their share of the limelight, Debo Band delivered a strong, if not powerful performance riddled with verve on Roskilde’s first music day last night.

This reviewer had high hopes of a good concert after interviewing one of the band’s members in Copenhagen on Monday, and I am pleased to say that Debo Band did not disappoint. Led by the staccato vocals of lead vocalist Bruck Tesfaye, the diverse ensemble took the stage by storm from the start of their show, opening with well-known tracks such as ‘Ele’ and ‘Asha Gedawo’.

Clad in psychedelic flannel trousers and a red shirt, Tesfaye sprung into the pits and high-fived the front row early on in the proceedings, forming a bond between Debo Band and the audience that became stronger with every song.

Within the realms of the unknown
Such is the level of instrumentation in this band it seemed that their otherworldly, rapidly-paced music had neverending levels to it, complementing its mystical qualities, which came to life on the Avalon stage. And few can argue that this very scene, formerly known as Cosmopol, was just the right setting for Debo Band’s show – a performance that became increasingly unpredictable as the minutes rolled by.

For it is within the realms of the unknown and the unfamiliar that the band’s music resonates in the ears of many of its listeners, this reviewer included, as we find ourselves exploring curious sentiments towards cultures and places unknown.

This is, after all, an age of music algorithms and deterministic if not predictable patterns when it comes to ‘what’s hot and what’s not’ in music.

Worthy of the heritage
The crowd grew in size and in dedication as the concert went on, and so did Debo Band, who signed off to wild, deserved applause from their audience.

Ultimately, one was left wondering what could have been had the crowd been slightly bigger, but under the circumstances Debo Band performed to the best of their abilities, delivering a show worthy of the cosmopolitan heritage that the Avalon Stage represents.