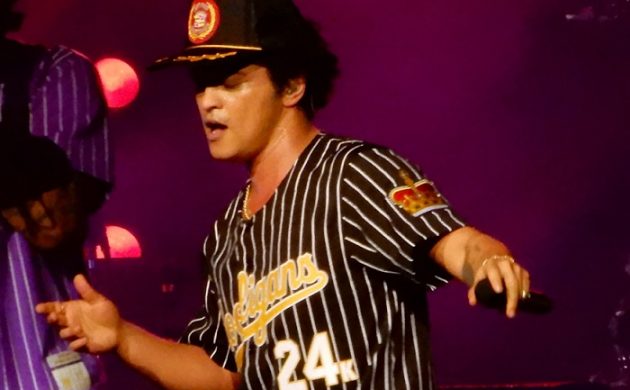 Bruno Mars was … sexy. This is the man known for ‘Just the way you are’, the sweetest and most innocent song ever, and ‘Uptown Funk’ – one of the most iconic songs of this decade, which was so overplayed it looped back around to being catchy again.

Yet as he gyrated across the stage, singing about Versace on the floor and how he treats women, Mars exuded confidence far beyond his stature. Nothing was off limits as he used the microphone as a pole on which to perform, making graphic hip movements throughout the evening, but laughing them off to ensure everyone knew this was a performance to not take too seriously.

Was his sexiness catching? Suddenly the whole crowd was being encouraged to feel his energy as he gave a crash course in his iconic dance moves: rocking back and forth in time to the music with a sexy hip sway and a cheeky grin. Check out any of his music videos and you’ll see what I mean.

And the crowd roars
Even before he arrived, he brought a level of energy I have never before experienced. Different from Eminem who used heavy beats and fast lyrics to excite the crowd, Mars and his back-up singers took the time to hype up the crowd until we were screaming for the show to begin. Pitting different sides of the stage against one another to test noise levels riled everyone up further, so by the time the first chords of ‘Treasure’ hit, people were ready to jump up and dance all night.

Not one to leave people waiting to hear his hits, Mars kicked off with ‘Finesse’ and ‘24K Magic’ in the first five minutes – his feet never stopping as trumpets and saxophones blasted behind him.

Old and new
After ensuring his sexy side had been well and truly proven with a powerful rendition of ‘Versace on the floor’ featuring Mars alone at the forefront of the stage, he turned to his older classics. A cheeky version of ‘Marry You’ and ‘Runaway Baby’ gave the horns a time to shine as the crowd sang their hearts out, and the signature ‘jumping-in-time-with-the-music’ dance that occurs during really good festival moments (in my opinion) could not be stopped.

At this point he had to ask the crowd to quieten down from their chanting as his attempt to acoustically singing was overpowered by the sheer enthusiasm shown by the audience and their persistent need to clap, stomp and yell.

And then suddenly he took it slow. He asked the crowd if he could change the tempo and sing one of his favourites, launching into the haunting ‘When I was your man’. Luckily Roskilde Festival in its entirety was on hand to provide some backing vocals. His change in tempo did nothing to dampen spirits and left the crowd more energised than ever.

Pulled off the impossible
The Hawaiian is constantly praised for his talents and stage presence: from multiple Grammy wins to rave reviews of his performances. But performing before a festival crowd, and Roskilde Festival at that – where pop isn’t exactly a favourite genre – was always going to be a challenge.

The slick performance, which saw Mars sing both old and new classics, showcased the very best of the musician. His incredible voice and dance moves were rivaled by none, and the non-stop party accumulated in ‘Uptown Funk’. Of course.

Mars went above and beyond to produce a show that perfectly balanced between fun, funky, sweet and … sexy.