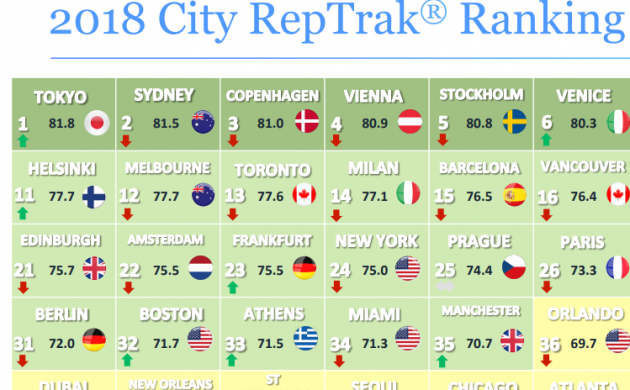 Copenhagen’s reputation is better than most (photo: Reputation Institute)
August 31st, 2018 11:48 am| by Christian W

Copenhagen may have a reputation for being expensive and having poor weather, but that doesn’t seem to have overly tainted the Danish capital’s global prestige.

According to the 2018 City RepTrack Ranking, published annually by the Reputation Institute, Copenhagen enjoys the third-best reputation worldwide. The city fell one spot compared to last year.

“There is some shake-up in this year’s list– only four cities appeared last year, meaning six are new to the top 10. Sydney, Copenhagen, Vienna and Stockholm were the only cities on last year’s top 10 list,” the ranking report found.

The City RepTrack Ranking (here in English) ranks the reputations of over 50 cities in the world based on a number of parameters such as safety, beauty, economy and respectable leaders.