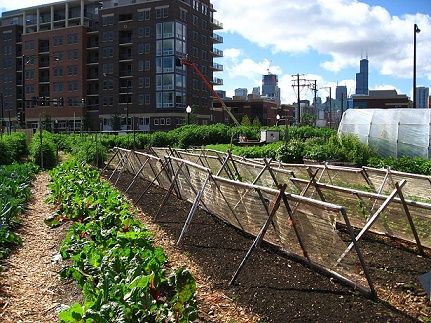 Urban gardens are becoming an increasingly popular phenomenon and the new park will contain 50 of them (photo: Linda, Chicago)
September 5th, 2018 3:31 pm| by Stephen Gadd

Architects Bang og Linnet Landskab (Bogl) are beavering away on a design for a new 40,000 sqm park in the southwestern part of Copenhagen. The new Kulbaneparken will contain urban gardens, training facilities, a manned playground for 9 to 17-year-olds and a covered communal kitchen – while 21 million kroner has been set aside for it with more money to come, reports Politiken.

The park will be situated in Kulebanekvateret, an area adjacent to the new Grønttorvet quarter on the border of Hvidovre Municipality. It will lie between two housing association blocks and it was here that Valby gasworks stood until it exploded one morning in September 1964.

A much-needed boost
According to the deputy mayor for technical and environmental issues, Ninna Hedeager Olsen, the site has been chosen because the area has been ‘forgotten’. “Kulbanekvateret is really an area that Copenhagen hasn’t done very much about. You can hardly point to any budget negotiations that shows they’ve had anything before,” said Olsen.

The urban gardens and the first part of the manned playground are scheduled to be completed in the spring of 2019. Residents would also like to see a football pitch included, but this is not on the current drawings.

The park is part of a renovation of the area financed by Copenhagen Municipality, Hofor and the Danish state to the tune of 30 million kroner.

LTF banned
It’s now official: the Loyal to Familia gang LTF has been banned by an administrative order from the authorities pending the outcome of a case in the Danish courts. The ban means that it will be illegal to wear clothing with the gang’s logo or the words ‘Loyal to Familia’ printed on it. Police also have the power to prevent people with known affiliations to the gang from congregating in certain spots, and the activities of the gang are also illegal. The justice minister, Søren Pape Poulsen, has taken this step as a result of the gang conflict that has dogged the capital in recent years, resulting in a number of deaths. It is estimated that the gang has around 200 members, although some of them are already in prison for serious crimes.

Learn from Christiania, says British academic
In an article for videnskab.dk, Helen Jarvis, an associate professor at Newcastle University, argues that a lot can be learned from the ‘degrowth’ culture that can be seen in societies such as Christiania. The accepted wisdom is that success is measured through economic growth but, according to Jarvis, new thinking is needed. “The Christiania residents’ rejection of growth means that they can step out of the ratrace that forces us to work in order to pay for our increasing consumption and we can all learn something from that,” she explained. Human relationships are prioritised higher then markets by maximising fellowship, cohesion, social justice and the health of the planet. The residents of Christiania live in their houses but can’t buy or sell their homes and businesses.

Copenhagen’s buses getting greener
Copenhagen is due to get 41 new electric buses and two routes will be going completely green – converting from diesel to electricity. Next spring will see electric buses in Roskilde and now Movia in Copenhagen following suit, reports Politiken. The routes in question are 2A and 18. The municipality has already decided to replace all the city’s buses with electric ones by 2030, but the mayor of Copenhagen, Frank Jensen, would ideally like to see this happening by 2025.

Another cyclist killed in blindspot accident
A female cyclist was killed early on Friday morning when a lorry turned right at a crossroads on Hulgårdsvej and Borups Alle and knocked her off her bike. The woman was intending to go straight ahead and the driver of the lorry had not seen her, reports Politiken. Police are still investigating the accident but one theory is that a barrier built of plastic elements separating cyclists from cars and lorries on Hulgårdsvej because of roadworks had obscured both the driver’s view and the cyclist’s.