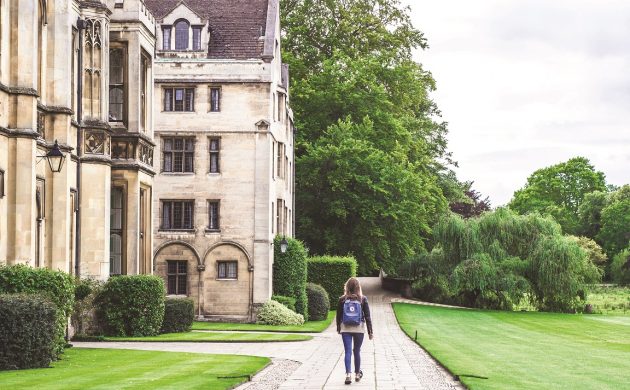 The prestige can be daunting, but that shouldn’t put you off from applying (photo: Victoria Heath, Unsplash)
September 22nd, 2018 6:00 am| by Robert Eyfjord

When Rune Kvist left his Danish high school, never did it cross his mind that he would one day study at the University of Oxford, particularly as he was not accepted into any domestic unis following his graduation.

Oxford via Kenya
Kvist opted for a total change of scenery. Fast-forward a couple of months and he was in Kenya, where he befriended a fellow ‘mzungu’ traveller – a British student at Oxford.

“What I learnt from this guy – still my friend today – was that Oxford students were mere humans. Smart ones, sure, but not that different from me,” Kvist recalled to CPH POST.

After his eye-opening African adventure, Kvist applied to Oxford. Much to his astonishment, he got in. His admittance quickly made him wonder how many other potential students were out there, who would never dare to apply to world-leading universities.

Borderless mentorship
Project Access is a non-political initiative created in February 2016 by Danes studying abroad. It relies on resourceful volunteers who have an aptitude for giving back.

Kvist and Emil Bender Lassen were both board members of Danish Students Abroad when they, along with some close friends, conceptualised an extensive, borderless mentorship program.

Kvist and Lassen – who attended the University of Oxford and King’s College London respectively – realised that there are access issues at many of the leading universities in the US and UK. They promptly assembled a team who would grow to collectively share a passion: to help bright, disadvantaged students into their preferred educations.

Speech, spreadsheet, support
“Project Access was rooted in my own experience,” Kvist explained.

“It didn’t start with a bold vision for a global organisation. It started with a talk at my local high school during a Christmas break. Then I introduced a high-schooler to a friend of mine at Oxford. Then another one. Then we got a spreadsheet to keep track of it. Then a name for the organisation – and so on, and so on.”

Adamant on combatting the underlying inequality of college admissions, Project Access soon developed into an award-winning organisation with 2,800 qualified mentors focusing on educational mobility in 20 different countries, such as Peru, Brazil and India.

“We’re called Project Access because we have a project to solve: education inequality,” added Kvist.

“And we’ll stick around until it’s solved.”

The lure of experience
Studying in Denmark certainly has its perks, as all Danish citizens can study for free. They can even apply for SU – financial support during the course of their education. Yet thousands of Danes seek to crack the books abroad, especially in the United States where tuition fees can be devastatingly high. According to DST, there were approximately 15,000 Danes studying abroad last year.

There are many virtues of enrolling at a university with a strong global presence. A campus filled with students of unique and dissimilar backgrounds can create a vibrant, all-encompassing atmosphere. Ethnically-diverse environments do not only offer their foreign students an opportunity to learn from the host country, but also an incentive to share their native customs and traditions – forming a culturally enriching experience for all involved.

The world’s most prestigious universities seem to have grasped the importance of cultural miscellany, with Harvard University reporting that the school welcomed 50.8 percent of its freshmen from minority groups last year. That means for the first time in its 382 years of existence, the majority of Harvard’s intake was non-white.

Best before lucky
Spread across the globe, an abundance of innovative, academically gifted students from underdeveloped countries strive to obtain the best education possible, ever proving that intelligence is unbiased to where a person happened to be born.

As the leading universities in the US and UK have such high endowments, many students are provided with financial aid throughout their studies. Alas, being able to offer a scholarship to the next Malala Yousafzai or Kelvin Doe is not an easy process – principally due to the low appliance rates from students of underprivileged social circumstances.

“For us, giving the same tools to untraditional applicants, as those from a privileged background have, is a way of levelling the playing field,” Lassen pointed out.

“It ensures that it is the best students that get into universities, not the lucky few.”

Continued recognition
Project Access is now headquartered in London, having recently signed a partnership with the University of Cambridge. The deal entails Project Access providing guidance and mentorship to 200 of the university’s recently accepted students. Furthermore, the World Economic Forum recognises three of the group’s leaders as members of the Global Shapers Community.

Nina Emilie Bechmann, a Danish student at Columbia University in New York, is spearheading developments in the US.

“The organisation has since grown into targeting specific groups, and what we hope to do is to make the process of applying a little easier for people who wouldn’t necessarily seek an education abroad – or an education at all.”

Tireless dedication
Since its inception two years ago, Project Access has helped more than 1,900 disadvantaged students prepare and apply to their dream university. Of the many inquiries they receive, the mentors only provide assistance to those with a realistic chance of getting into a university.

“Being a nontraditional student can be incredibly hard – and the hard part does not end once you finally get accepted into college,” added Bechmann.

“Getting into college is the first hurdle they need to jump, but many experience even more significant challenges once they start.”

Project Access currently receives support from private charitable donors, but in the future its aim is to replace this with revenue derived from corporations and universities.

A great success rate
Some 71 percent of this year’s applicants revealed they were accepted into one of their top three college choices after being mentored by Project Access.

Kvist, who crafted the blueprint for what would become Project Access with fellow students at the University of Oxford, slipped into an advisory role last year and now serves as a trustee.

– Be available in 30 countries by the end of December

– Help over a thousand students annually

– Become financially self-sustainable within the next year.