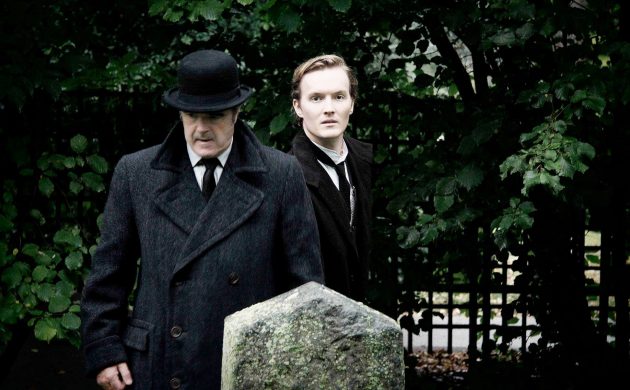 That Theatre Company’s production of ‘The Woman in Black’ is suspenseful from the very beginning. The story is both horrifying and thrilling. Set in the staging of a meta-theatre, a play within a play, the production features two principal actors (Ian Burns and Benjamin Stender). It is simple yet effective, contains engaging acting, and will have you sitting on the edge of your seat wondering what might come next.

Slow start as the suspense grows
Susan Hill’s horror story was adapted for the stage by Stephen Mallatratt. Directed by Barry McKenna, the play depicts an elderly man named Arthur Kipps (Burns) who seeks out the help of a young actor (Stender). Kipps wants to share the story of his encounter with a vengeance-seeking ghost. The line between reality and the story begins to grey as he and the actor start depicting the events. The men are plagued by the chilling hauntings of the Woman in Black.

The beginning of the performance starts off slightly slow. Much of it is revolves around Kipps and the actor deciding how to present the story. Once finally settled on the agreement that the young actor should depict Kipps, the story becomes more enticing. The dramatics of the second half of the play make up for the slow start.

Simple staging and scenery ignites our imagination
The unexpected appearances of the Woman in Black captivate the audience. Never knowing when she will show, an element of suspense builds throughout the production. That Theatre Company did an excellent job at portraying the Woman in Black. Starting with only brief flashes of a faint figure in black, the woman becomes more defined with each sighting, creating a terrifying thrill.

The simplicity of the stage and scenery creates an eerie feeling that adds to the dramatics. The theatre is on the smaller side, which allows the actors to walk through the seating. While the smaller staging and theatre could initially undermine the credibility of the production, it instead adds to it. The company uses the small setting to its advantage to make a more intimate environment with the audience. The close proximity of the staging was entrancing.

Much of the scenery is left to the audience’s creativity and interpretation, creating a greater sense of mystery and adding to the eeriness of the play. Only vaguely depicting the manor house allows viewers’ imaginations to wander and wonder. An aura of mystery surrounds the stage.

Leaves a chilling imprint
Horrifying and thrilling, the play has many moments that would make any audience member jump out of fright, painting haunting pictures in one’s mind that will last long after the curtain call.

A purposefully precise play, ‘The Woman in Black’ is a Gothic horror ghost story that leaves a chilling impression on its audience.

The Woman in Black