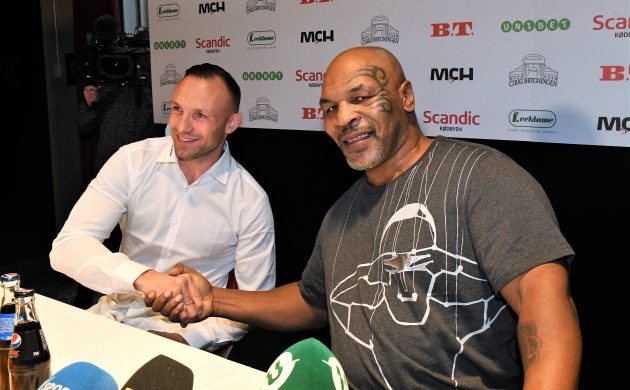 Mike Tyson loves Denmark and he speaks the truth!

Ahead of completing a two-date ‘chat show’ tour on which he and Danish boxing great Mikkel Kessler took part in Q&As with audiences in Copenhagen and Herning on October 30 and 31, he told media that somebody would be arrested if they left their infant outside while they went into a shop.

And he’s not wrong!

Anette will testify
In May 1997 a Danish woman was arrested in Tyson’s home city of New York when she left her 14-month-old daughter outside a restaurant in a pram.

Just last year Anette Sørensen spoke out to say she was “unjustly vilified” for actions that led to her arrest, strip-search and temporary loss of her daughter, as well as an international debate about parenting styles.

Sørensen’s 2017 remarks were no coincidence, as she intends to publish a book recalling her experiences.

All ears when Mike speaks
“It’s beautiful here and nice to be – and people are really friendly,” Tyson told those gathered at a press conference in Kødbyen on Tuesday.

Ironically perhaps, but a month after Sørensen was arrested, no police action was taken against Tyson after he bit part of Evander Holyfield’s right ear off during a world heavyweight title bout in Las Vegas, although he was fined and stripped of his boxing licence – for all of 16 months.

Saturday we’ll be in love watching The Cure on the Orange Stage
British 1980s goth group The Cure have confirmed they’ll be giving the final concert on the Orange Stage at next year’s Roskilde Festival – so one day too late for ‘Friday I’m in Love’. Robert Smith and the band, who are celebrating their 40th year together, last played at Roskilde in 2012 and made their first appearance there in 1985. Next year’s Roskilde will continue from June 29 to July 6, and festival passes cost 2,200 kroner. In related news, the following concerts have been announced: US singer-songwriter Maggie Rogers (Store Vega; March 6; 200kr), Norwegian rap band Karpe Diem (Store Vega; June 8; 310kr), US rock band Escape the Fate (Pumpehuset; Feb 2; 230kr) and Boston rockers Godsmack (Den Grå Hal Christiania; March 21; 220kr). For ticket information, visit here.

Genitals, brains and fermented squirrel on Noma’s autumn menu
Noma’s latest seasonal menu, following a seafood-inspired spring line-up and a summer vegetable affair, focuses on game, but don’t expect any of the traditional favourites. The line-up includes the genitals of a sea cucumber, a complete duck’s head using the tongue as a spoon, a tartare composed of a reindeer heart, soup made from bouillon and fermented squirrel, and muskox and rye bread porridge. The full 20-dish menu costs 2,400 kroner, and with wine an extra 1,350 kroner. Impossible to reserve a table for, most diners are advised to book years in advance.

Nothing for Danish nominees at Nordic Council Prizes as minnows dominate
The Nordic Council Prizes in Oslo proved to be a dead-loss for all the Danish nominees. Instead the lesser states dominated, with Iceland (film and literature), the Faroe Islands (children’s and youth literature) and Greenland (environment) all picking up gongs. Of the other major states, only the host Norway (music) was triumphant. Just to rub it in, Auður Ava Ólafsdóttir, the winner of the literature prize, which is deemed the most prestigious of the five awards, quoted ‘Hamlet’ in her acceptance speech. Caroline Albertine Minor and Vita Andersen were the Danish nominees for the prize.

Interest in Denmark’s Sylvia Plath rising after English-language publication
Interest in English-language versions of Tove Ditlevsen’s poetry is growing – particularly now that three of her works have been published by British Penguin Books for the first time, with a fourth book possibly coming out next year. Ditlevsen, who was born in 1917, published her first poems in 1939. She spent a fair part of her adult life in psychiatric wards and she took her own life in 1976 at the age of 58.