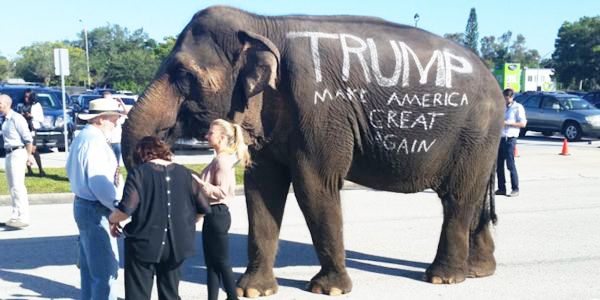 Now we know why Nelly the Elephant packed her trunk and trundled back to the jungle (photo: care2 petitions)
November 11th, 2018 5:00 pm| by Annaclaire Crumpton

It used to be mild curiosity when Danes met Americans for the first time. The election of George W Bush certainly raised a few eyebrows, and maybe the Bill Clinton cigar episode too, but most Danes remained true to their inclination to avoid confrontation at all costs, limiting their conversation to ‘where are you from’ and ‘how are you enjoying Denmark’.

That was before the elephant entered the room. Now, there’s only one topic of conversation on Danish people’s lips when they encounter Americans: the election and continued belligerence of US President Donald Trump. In the same way Brexit has started to dog many Brits, for Americans in Denmark, Trump’s election has been a game-changer.

Travel warning
Maybe it would be different if Trump reserved all his hostility for the Democrats, but he doesn’t: he spreads it around liberally. In July 2018, when responding to a journalist’s question about America’s greatest enemies in the world, Donald Trump answered: “I think the European Union is a foe – what they do to us in trade.”

Now nobody’s suggesting Denmark should install a four-minute warning system. The truth remains that America’s greatest trade and military allies lie on the European continent. Denmark, though small, continues to be one of America’s most trusted friends. Stretching nearly 220 years, the two countries share the longest unbroken diplomatic relationship in the world, according to the Museum of Danish America.

But the impact of Trump’s election cannot be denied, with Danes taking a particular interest in The Donald. And the White House’s recent report claiming Denmark was a socialist country will have done little to persuade them that the president views them favourably.

It has gotten to a point when American universities are even going as far as warning their students before coming abroad that Danes will constantly ask about Trump.

Colorado State University, Tulane University and the University of Minnesota are among the programs that inform their students before sending their ducklings across the Atlantic.

Tell them you’re Canadian
A typical conversation today tends to begin with an American admitting “I’m from the US”, to which the Dane says “Trump, eh?” or “How do feel about Donald Trump?” – often accompanied by a raised eyebrow or a cheeky smile.

It has got to a point that many Americans are not disclosing their nationality. In the bars on Vestergade where many US students gather to hit Copenhagen’s nightlife, the word “Canadian” is used more frequently than you might expect.

“Just tell them you’re a Canadian – that works for me,” advised North Carolina native Cierra Gibel, a student from Dickenson University

But it isn’t always this easy. Maureen Harrison, who studies law at Georgetown University in Washington DC, recalled how she visited youngsters at the SFO of a Danish school (grades 0-3), where she was greeted right off the bat by the second and third-graders asking questions about Trump.

“Yeah, Danes ask about that all the time – it can often be the first topic of conversation,” she said.

“People who have never been to the US and don’t go to school there cannot fully understand US culture. It’s natural to have that curiosity about it.”

“It’s the first thing that people ask about,” she said.

“That was the first thing my visiting host family asked too.”

Trump would appear to have made Danish people better informed about US politics. Many students remark that their cross-cultural interactions are often initiated by Danes who bring an incredible amount of political knowledge to the fore.

But in such conversations, the students feel they are often defending their nationality.

A healthy interest
Dorte Marie Ammegard, a Danish teacher at the Danish Institute for Study Abroad (DIS) program who has previously studied in the US as a guest-scholar at Brown University, doesn’t think the Danes are trying to be offensive.

Essentially, she says, they are earnestly trying to learn and are perhaps more comfortable talking about the subject than many Americans who prefer to dance around the political bonfire.

“The cross-cultural perspective is important; to have knowledge-sharing is a way to create dialogue and understanding,” she said, adding that it is understandable that there is concern about Trump’s “decisions made in relation to trade, being allies, and worldwide conflicts”.

Nevertheless, she is confident most Danes can distinguish between Trump and other Americans.

Trumpism in Denmark
Denmark, on the other hand, is enshrined by the American political left as the perfect example of social-democracy. They are impressed by a welfare state that includes a universal healthcare system, legislation designed to equalise wealth distribution and an enviable infrastructure.

Nevertheless, there are concerns – most notably with the policies pursued by the integration and immigration minister, Inger Støjberg, of which many are introduced to appease right-wing party Dansk Folkeparti, without whose support the government could not hold a majority.

Anderson recalls how a fellow student asked Støjberg at a recent meeting if she would compare herself to Trump – one could say the boot was on the other foot for a change – to which the minister replied absolutely not.

Anderson was unconvinced: “I’m not sure how her policies make her any different if not worse than Donald Trump himself.”

Ahead of the US midterm elections on November 6, interest in Trump and US politics has again been peaking in Denmark, hopefully combined with a realisation that not every American over here necessarily wants to single-handedly take the blame for his election, policies and bilateral negotiations.