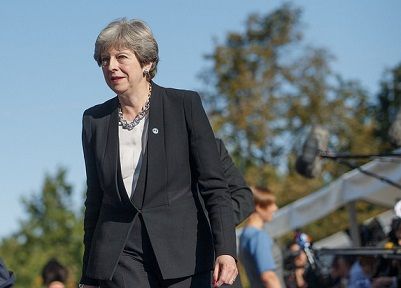 May is now a step closer to walking away from Europe and taking back control (photo: flickr/Raul Mee)
November 15th, 2018 11:53 am| by Stephen Gadd

Last night, at a press conference outside 10 Downing Street, UK Prime Minister Theresa May was finally able to announce that agreement had been reached on a proposed Brexit deal.

The announcement came after two hectic days of negotiation, in which May had to work hard to bring her own cabinet into line behind the proposals.

Assuming the agreement passes both the UK Parliament and the House of Lords, it will be ready for submission to the other EU countries and the European Parliament.

“Brexit is and remains a sad thing, but despite that, I’m very enthusiastic,” he said in a written statement.

“It is extremely positive that the British government has given the green light to the severance agreement that our negotiators agreed on yesterday. That is a major step away from the ugly kind of divorce in which the porcelain goes flying through the air,” he added.

Still a lot of work
However, there is still a long way to go before a final agreement is reached. According to the Guardian, up to 11 of May’s cabinet ministers voiced objections to the deal during yesterday’s marathon five-hour cabinet meeting, and a number of MPs from all parties in the UK have voiced dissatisfaction.

But Rasmussen was cautiously optimistic. “Now we will have to look at the text closely. We are ready to move forward in the negotiations and I’m looking forward to discussing the agreement with our European partners,” said Rasmussen.