 Not a-Falcking-gain! The family company with a history of sharp business practices - The Post 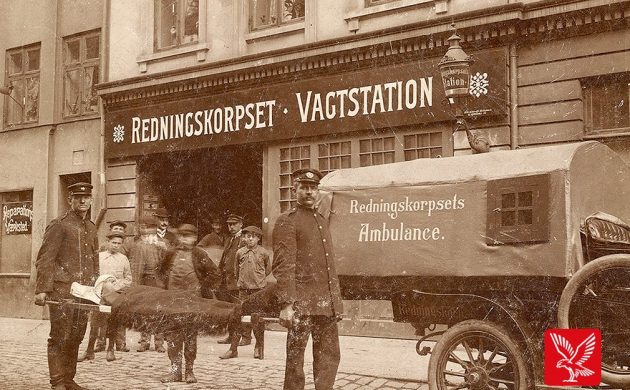 Falck – the Nordic-based organisation that operates within assistance, healthcare, rescue and safety services – has had a torrid time of late, fielding all sorts of accusations of unfair business practice, but it hasn’t always been that way.

A national treasure
Today it has a presence across most of Europe and across six continents, earning net revenue of 15.2 billion kroner and employing 38,000 people – including 12,000 in Denmark where it is responsible for 85 percent of the ambulance service market and accounts for 65 percent of the fire services – but it was in more humble surroundings that it was founded on 3 October 1906 in Copenhagen by Sophus Falck. In the years since, it has become as ubiquitous around Denmark as open-faced sandwiches.

It was the fruition of over 20 years of planning. A 19-year-old Falck had witnessed Christiansborg Castle burning down and volunteered to help. He observed how there was no real organisation or control of what was happening. A lot of the paintings, furniture and other artefacts were simply dragged out of the castle whilst the firefighters tried to subdue the blaze.

“I will never forget the desolate sight presented by this dreadful fire, nor the deep sorrow afflicting high and low; it was indeed a national disaster,” he later recalled in 1923.

“On this occasion, however, I was alerted to the necessity of organisation – calm, discipline, trained personnel and proper equipment – if such a fire is to be fought efficiently and if anything is to be salvaged under such conditions. The lesson I learned here has stayed with me in my work and has been fruitful.”

Sophus, himself the son of a tobacco manufacturer and educated as a gunsmith, established himself as a blacksmith after a spell abroad helping to build hospitals in Manchuria during the Russian-Japanese war.

Audacious beginning
In 1906 he opened the doors to a three-storey salvage station in the centre of Copenhagen. On that day almost 4,000 people turned up to see the inauguration of the new station. The staff performed fire drills for public and journalists alike, although at the time they only possessed two cars, one motorbike and a few bikes.

In 1907, its first ambulance station was set up in Kælkebakken Ulvedalene in Dyrehaven, and it wasted no time in building a reputation, providing rescue services in response to the 1912 Sugar Factory fire (and three months of salvage), as well as the 1919 Vigerslev train disaster – Denmark’s worst train crash.

In 1926 a new law made it compulsory for all local councils to provide a firefighting service on standby. This provided the spark the business needed. Councils all over Denmark turned to Falck to provide the services the law required.

The law came in the same year as Sophus Falck’s death, after which his sons took over – first Rudolph and then William. But by this point Falck was already firmly established. It had grown steadily in size and now consisted of three rescue corps, several stations and a large number of firefighters.

Mergers and acquisitions
Falck soon became known for its efficiency and expertise and by 1956 (Falck’s 50th birthday) was a nationwide operator, with 100 rescue stations in Denmark.

Falck expanded further on 1 January 1963 when it acquired shares in its main competitor Zone-Redningskorpset – a company formed by a group of its dissatisfied employees in 1931. Officially it was known as Falck Zone, but in 1977 it was shortened to just Falck.

In 1993 the company expanded to include security with the purchase of ISS Securitas, changing its name to Falck Securitas. And in 1995 it was listed on the Copenhagen Stock Exchange. In 2000 it merged with the international Group 4, which would lead to the company being renamed Group 4 Falck. And a further merger in 2003 established it as the world’s second biggest player in the security market, only surpassed by the Swedish company Secuitas.

In 2005, it was taken over by the capital fund Nordic Capital, in co-operation with ATP Private Equity, and delisted. The main shareholders today are the Lundbeck Foundation (57 percent) and Kiribi (27.8 percent).

Meanwhile, Falck has steadily been growing outside Denmark, playing major roles in the emergency response to a number of major incidents, including the 2015 Paris terror attacks, the 2004 Indian Ocean tsunami, and the 2010 Deepwater Horizon explosion in the Gulf of Mexico.

Unfair practice?
Falck has always kept an extremely close eye on any potential competition and often reacted using methods that would make a mafia don proud.

Back in 2002, Vejle Amt asked the fire services in Vjele, Horsens and Frederica to establish an ambulance service that could compete with Falck. However, Falck – backed by the trade union SID – made it crystal clear that their people would never drive those ambulances, so the idea was dropped. The same thing is said to have happened on Funen.

In 2008 it was the smaller Swedish ambulance service Samariten that felt the wrath of Falck. Samariten won a contract to run ambulances in mid-Jutland, Zealand and Copenhagen. But the company was forced to give up the contract and retreat back to Sweden as they were unable to reach an agreement with the trade union 3F.

And then in 2014 the Dutch company Bios won a contract to drive ambulances in a large part of southern Denmark that Falck had formally had exclusive rights to. Bios was unable to recruit ambulance drivers and it later transpired that Falck was involved in spreading derogatory stories about Bios through negative press coverage and waging a war on social media by proxy.

Ministerial intervention
As a direct result of the furore surrounding Falck’s recent strong-arm tactics, on February 10 the innovation minister, Sophie Løhde, entered the fray, telling DR that she intends to tighten up the law so that public contracts can be nullified if a company is prosecuted.

In addition, the minister would like to see errant companies banned from tendering for public contracts for a longer period than at present.

So it would seem that a lot of humble pie will have to be eaten (as well as generous compensation paid out) if Falck is once again to regain its place in Danish hearts as the country’s favourite rescue service.