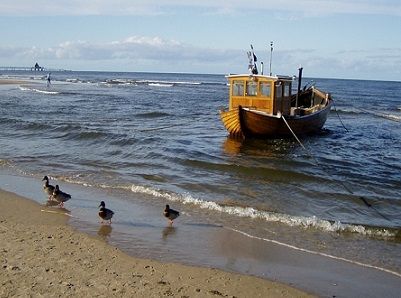 Soon there might not be much more out there for him to catch (photo: Nhelia/pixabay)
March 7th, 2019 1:33 pm| by Stephen Gadd

Global warming is taking its toll on fish populations and, by extension, the fishermen and communities that live by fishing.

Sand smelt dealt a downsizing
A new report by researchers at New York’s Rutgers University reveals that the globally sustainable catch has fallen by 4.1 percent from 1930-2010 due to the seas heating up, and in some waters it has shrunk by as much as 35 percent.

In Denmark, recommended catches of fish such as the sand smelt have been adjusted from 255,000 tonnes in 2017 to 90,000 tonnes this year, reports DR Nyheder.

Some like it cold
Cod are also in trouble – especially in the Baltic. The fish are sensitive to the water’s temperature, as well as the concentration of salt and oxygen, and they tend to seek other breeding grounds where conditions are more favourable.

On the positive side, warmer temperatures could mean that other species start making their way to Danish waters.

Animal tranquilliser to help depressed patients
Ketamine, a drug used for, among other things, chronic pain relief, has just been approved by the US Food and Drug Administration as a treatment for depression. Ketamine has also been used as an animal tranquilliser as well as a recreational drug, because when it is taken in large quantities it produces hallucinations. Denmark has also been investigating the drug in connection with treating depression and Professor Poul Videbech from the Centre for Neuropsychiatric Depression Research at Glostup Hospital is positive about the US decision, reports DR Nyheder. “Again and again we’ve seen that ketamine works quickly and effectively on depression where everything else has been tried and failed,” he said. Videbech has organised a nationwide research project that he hopes will pave the way for the use of the drug in Denmark. “At present, we estimate that 30 percent of all patients hit by depression become chronic whatever treatment is given, so there is definitely a need to go new ways,” added Videbech.

New fungus discovered in Denmark
A former head gardener from Aarhus University’s research garden has discovered Postia undosa – a type of brown rot fungus – in Denmark for the first time in the national park at Mols Bjerge. The fungus was found on a large dead tree in the forest of Hestehave overlooking Kalø Vig. Although it was collected in November 2017, it has taken the park some time to identify the find. It is estimated that Denmark plays host to around 6,000 different species of fungus. Global warming is thought to be a factor when it comes to new fungi spreading to Denmark.

Eagle shot in Lolland
A female white-tailed eagle has been found shot dead at the Saksfjed-Hyllekrog bird reservation in Lolland. As it is a protected species, the Ministry for the Environment and Food intends to report the matter to the police, reports TV2 Nyheder. A webcam had been set up by the nest so that bird-watchers and other interested parties could follow the breeding pair. Experts think the act was deliberate and it would not be the first time that an eagle has been shot. In 2016 a golden eagle was found dead near Limfjord.

New islands emerging round Denmark’s coasts
Denmark’s territory has expanded by eleven islands over the last three years, mostly through coastal erosion, with sand and silt being carried out to sea and deposited there. Officially, an island is something that can be sailed around and has to have water more than 50 cm deep around it at all times. Since 1990, there have been 138 of them registered. Six of the new islands have appeared in Sækkesund, the waters north of the island of Møn, and five smaller ones can be found in Nissum Fjord in the North Sea off the town of Vemb. The total area of the 11 islands is a little over 63 hectares, ranging from the largest at 36 hectares to the smallest at 386 sqm. On the other hand, Kolling Ø, a small island in Nissum Fjord, has now disappeared beneath the waves.