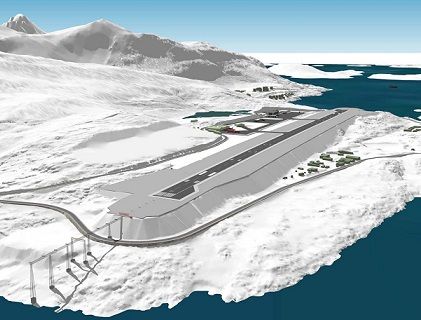 Denmark’s finance committee has approved a deal for the Danish state to buy shares for 700 million kroner in Kalaallit Airports International for the construction of new international airports in the Greenlandic cities of Nuuk and Ilulissat. This amounts to a 33.3 percent ownership.

The remaining 66.6 percent of the shares will be owned by Kalaallit Airports Holding (KAH), which will contribute 1.4 billion kroner to the project, reports Check-in-dk. KAH is wholly-owned by Greenland’s governing body.

Keeping out the Chinese
The move can be seen as one of the government measures being taken to minimise foreign – and especially Chinese – investment in essential infrastructure.

Supporting tourism
It is hoped that the new international airports will underpin business expansion and support tourism.

The runways at Nuuk and Ilulissat will be 2,200 metres in length, which is long enough for the trans-Atlantic flights that at present use Kangerlussuaq or Narsarsuaq. Qaqortoq will feature a runway of 1,500 metres.