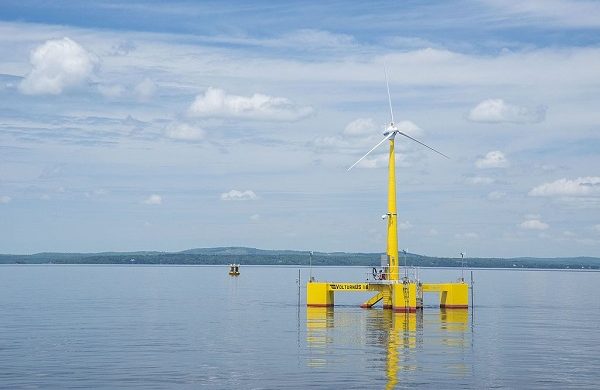 Floating wind turbines could be the next big thing in sustainable energy.

Researchers at Force Technology in Lyngby are testing scale models of a system developed by Stiesdal Offshore Technologies that allows turbines to be held above the water by the help of a large pyramid of tubing. Underneath, a keel keeps the turbine balanced and large chains or wires anchor it to the seabed so it doesn’t move or tip over.

When tests in Maine and Aalborg University are completed, a large-scale turbine will be placed off Stavanger in Norway, 10 km from the coast and in water of a depth of 200 metres.

A Lego kit
Research is also being carried out into constructing a floating platform to lead the waves around the turbines. This is envisaged as a construction set that can be sailed out to the turbine on a supply boat.

“The idea is that it should be a Lego assembly kit, but of course on a much larger scale,” Morten Thøtt Andersen, a wave researcher at Aarhus University, told DR Nyheder.

Because of its previous expertise in the field of wind turbines, it is expected that Denmark has a good chance to become a world leader in the new technology as well.

“I certainly expect that a number of the projects and ideas coming out of Denmark in this area will be some of the ones that will reach the world market in the coming years,” said Jan Hyllegner, the head of the wind turbine branch organisation Vindmølleindustrien.

New muscle medicine closer to reality
When we get older our muscles begin to lose their power and, on average, we lose 30 percent of our muscle mass from the age of 20-80. This means a general slowing up and a greater risk of accidents such as falling. Danish researchers at Aarhus University are working on something that could result in a new medicine to reverse the trend, reports Videnskab.dk. Experiments with mice using a new molecule that increases muscle mass without affecting the number of red blood cells that could increase the risk of blood clots have been a success. If things continue in the right direction it may be possible to have a drug ready in three to five years.

World’s largest glacier growing
These days we’re used to hearing depressing news about melting ice and rising sea levels due to global warming, so it may come as a bit of a surprise that the world’s largest glacier, Jakobshavn Isbræ in Greenland, is actually growing in size. Satellite data from NASA published in Nature Geoscience has revealed that since 2016 the glacier has slowly become thicker, as well as moving closer to the sea instead of retreating towards the land, as it has done with increasing speed over the last 20 years. The glacier is on UNESCO’s world heritage list and is know to be one of the fastest-melting ones in the world. Unfortunately, the growth spurt is only temporary because the seas are warming up and will have a negative effect on the glacier.

Bornholm to get Denmark’s largest battery
As fossil fuel-driven power stations are gradually phased out of the system, super-sized batteries are set to play a much larger part when it comes to providing electricity. A new DTU Elektro-led project called BOSS in Bornholm has just received a grant of 19 million kroner from the Energistyrelsen energy council towards the total cost of 30 million kroner. Over the next four years the project will develop and run an advanced battery storage system with a capacity of 1MWh/1MW, which will be the largest of its kind in Denmark. BOSS is seen as the key to the intelligent energy systems of the future, and the experience gained on the project will put Denmark in a favourable position when it comes to sustainable energy technology.

Towards the unmanned ship
ShippingLab is a newly-launched project that will see educational institutions, universities and the maritime sector working together to put Denmark at the forefront when it comes to autonomous ships. “We have a vision of creating a ship that will be able to sail with an unmanned bridge for certain periods or without a navigator on board,” said Mogens Blanke, who is heading the project at DTU Elektro. The project aims to focus on digitalisation as well as environmentally-friendly technology. The first step is to beef up computer technology so that computer algorithms can be just as clever as an experienced helmsman.