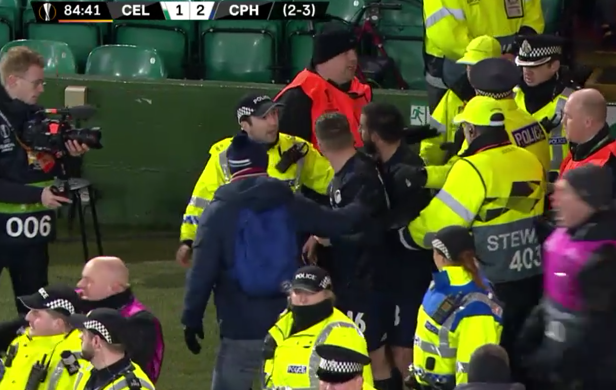 When Celtic levelled the score with just seven minutes remaining of the second leg of their Europa League clash at home to FC Copenhagen on February 27, to tie the score 1-1 on the night and 2-2 on aggregate, there was every reason to think the Buoys could pull off a famous comeback.

But events were about to transpire that would wipe the smile off the local fans’ faces – and in the away end too!

Neck-high tackle
When Spanish midfielder Pep Biel burst the net in the 85th minute to put the Lions 2-1 ahead – a goal that meant Celtic needed to score twice to win the tie – his enthusiasm to celebrate in front of the FCK fans was understandable.

But also illegal, according to an officer on the sidelines who tried to stop Biel with a neck-high tackle before grappling with him.

However, he hadn’t reckoned on FCK’s Uruguayan forward Michael Santos, who seconds later barreled into him, knocking him clean off his feet. Even Fabio Cannavaro, in his prime, wouldn’t have gone down quicker.

Disbelief at charges
Much disbelief has been uttered online that Santos now faces charges for his actions, along with a 42-year-old FCK staffer who also got involved in the fracus.

A recent clip in which a Celtic scorer jokingly swiped a police officer’s helmet during his celebration was quickly adopted into a meme or two to illustrate the double standards of the situation.

FCK’s reward for beating Celtic was a tie against Turkish league leaders Istanbul Basaksehir, and away from home on March 12 they lost 1-0. The return leg is suspended indefinitely due to the the coronavirus.

Record-breaker
FCK coach Ståle Solbakken, meanwhile, can take pride in setting a new Europa League record for the most games coached at a single club.

And it’s now been 30 games since any team scored more that one goal against FC Copenhagen in European competition – another all-time record to be proud of.

Magnum pops its cork
Magnum, a five-year-old Danish horse recently taken on by a British trainer, got a Racing Post write-up ahead of its hurdles debut at Musselburgh on February 27, where it finished second over a distance of nearly two miles. Magnum, a regular on the flat at Klampenborg, just missed out on joining the exclusive Danish National Hunt winners’ enclosure that includes King Brex, Algenon and Invictress.

Catch that pigeon!
The winner of a recent Pakistani endurance race for pigeons, in which the birds had to fly from Punjab’s Rajanpur district to Peshawar in the shortest possible time, was originally imported from Denmark, reports The Tribune. It covered 650 km in seven hours and five minutes. The sport attracts all social classes. While owners tend to be rich, experts are often illiterate.

Handball worlds nod
Denmark will co-host the 2025 Men’s Handball World Championship with Croatia and Norway. Their joint bid was the only one for the 2025 tournament. However, Denmark will only host one quarter-final. Norway will get the final and share the semis with Croatia. Denmark is also due to co-host the 2023 women’s worlds with Sweden and Norway and 2023 women’s Euros with Norway. In related news, Jesper Jensen is the new coach of the women’s national team.

Danes smash records
The Danish men’s pursuit team, complete with nifty helmets, set three world records in two days on their way to the gold medal at the World Track Cycling Championships. And then one of the four, Lasse Norman Hansen, added another gold in the men’s Madison.

England beckons
Denmark’s reward for being promoted into the top level of the Nations League is a group alongside England, Belgium and Iceland. Heading into the draw, Denmark were a third seed.

Historic Ironman
Danish athlete Anders Hofman has become the first person ever to complete an IronMan on Antarctica, even though he had to take a 27-hour break during the 42.2km running leg due to a blizzard offering up 100 km/h winds.

FCM rewriting history
FC Midtjylland are on course for a record points average in the Superliga with 2.57 per game from their first 23 contests – a new record at this stage. FCK had an average of 2.52 back in March 2012.

Youngest ever in Superliga
Horsens youth Jeppe Kjær recently became the Superliga’s youngest ever player, making his debut on his 16th birthday, which is in fact the age limit for the league.

Clara into top 250
Clara Tauson has climbed a further 49 spots up the tennis world rankings to 217th following her victory in the Glasgow Open in late February.

Bears close to Euro semis
in basketball, the Bakken Bears are close to reaching the semis of the FIBA Europe Cup after beating the Belarus side Tsmoki Minsk 79-66 in the first leg of the quarters.

All of these stories were written before the coronavirus led to the cancellation of most of the world’s sporting events.