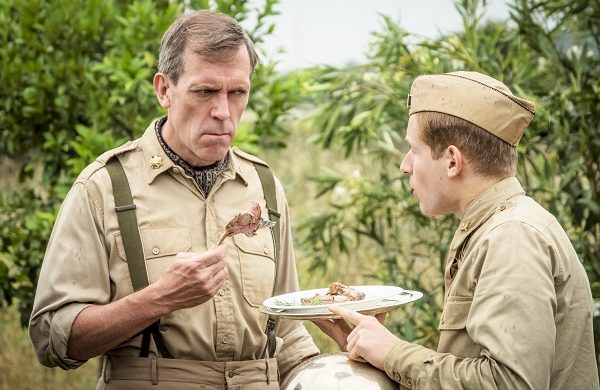 What do Steve Jobs, Truman Capote, Wyatt Earp, Christopher Columbus, Robin Hood and a big sloppy police dog have in common? No, it’s got nothing to do with the sexual molestation of native Americans.

The answer is they’ve all been the subject of ‘twin films’ (Turner & Hooch and K-9, for example) – that phenomenon when two studios release virtually identical films at almost the same time. Two is apparently the golden number in Hollywood, with executives figuring they can share the marketing costs.

It all started with Gone with the Wind. Bette Davis missed out on the role of Scarlet O’Hara, and Warner Bros promptly cast her in Jezebel, the story of a Deep South heroine battling her way through the Civil War. And because, quite frankly, the rival was so long, it was released a full 18 months earlier.

And then in the 1960s, very similar films to The Graduate – involving an older woman seducing a younger man – sandwiched the Oscar winner. One of them was even called Benjamin!

Caught out by a mash-up
for its director Mike Nichols, that wasn’t his only brush with twin films, although his second flirtation did not become obvious until he sat down to view a screening of the ‘rival’.

When Nichols made Catch-22 for the screen in 1970, he was Hollywood’s most reliable pair of hands taking on one of the 20th century’s most popular books – seemingly a recipe for certain success. And he remained confident until he arrange a screening to watch another anti-war film scheduled for release, Robert Altman’s M*A*S*H.

“We were waylaid by M*A*S*H, which was much fresher, improvisational and finnier than Catch-22,” recalled Nichols. “It just cut us off at the knees.” Its director Robert Altman had a banner in his office that simply read “Caught 22”.

George and Wooster
Box office failure swiftly followed as the critics tore into what they regarded as a travesty of a script given the richness of the source material and film-goers, who had flocked to see war films in the 1960s, deserted the genre when the horrors of Vietnam rendered them unheroic and too close to reality.

Now we’re immune to everything, and Catch-22 (from May 18 on C More) is returning as a miniseries with George Cooney onboard as producer, co-director and star. Given that the main criticism of the film was that it merged characters and cut good storylines, there are high hopes that this, with Hugh Laurie also onboard, could be one of the series of the year.

Selma goes Central Park Five
Laurie’s come a long way since he was one of Peter’s drippy friends, as has ecological warrior Emma Thompson – a huge 8,000 km carbon footprint to fight climate change in London when it suits her.

In Years to Years (HBO Nordic from May 22), a new British series created and written by Russell T Davies (A Very English Scandal, Doctor Who), her character is equally controversial and, who knows, portentous, as she is a celebrity who becomes a politician.

elicity Huffman has burnt that bridge with her college admission bribery and, who knows, maybe she’ll end up visiting the same prison the central characters in the miniseries When they see us (Netflix from May 31) spent over a decade in for an assault they did not commit. Huffman and the always excellent Michael K Williams (The Wire, Boardwalk Empire) head a strong cast for this retelling of the Central Park Five case. Ava Marie DuVernay (Selma) directs, and it looks absorbing.

The same can’t be said about What/If (Netflix from May 24), a new anthology from the creator of Revenge. Renée Zellweger stars, and the trailer looks like a perfume ad.

To complete our TV lookout, three series are returning for second helpings on Netflix: The Rain (May 17), Good Girls (May 31) and She’s gotta have it (May 24).

Twilight with cystic fibrosis
In case you haven’t guessed it, the TV output this issue is vastly superior to what’s on at the cinema.

Is Red Joan (45 on Metacritic; May 16) just Red Sparrow 40 years on? Judi Dench is the retired spinster in suburbia being investigated by the British secret service.

Five Feet Apart (53; May 16) is a Twilight rip-off in that it is a depiction of two teenagers in love who cannot kiss – not because one of them is a vampire, but because they both have cystic fibrosis.

Living with the carcinogenic kid in Brightburn (Not Released Worldwide; May 23) isn’t going to end well. It ponders the question: what if Superman was bullied at school. Chronicle got a lot of joy out of a similar premise.

But if we had to recommend one releases – it wouldn’t be John Wick 3 (NRW; May 16) or Will Smith as the genie in Aladdin (NRW; May 23) – it would be The White Crow (60; May 16), the story of Rudolf Nureyev’s defection to the West, which sees Ralph Fiennes take the director’s chair for the third time. However, some critics didn’t like the choppy timeline.

Brainstorm me some movies
Sadly there is no such promise on Netflix. In fact all four of its films this issue sound like they were brainstormed in an ad break.
“Give me Black Lives Matter and Back to the Future – let’s establish some gravitas and then turn it into a goofy comedy.” The result is See you yesterday (May 17).

“Give me Stranger Things and War of the Worlds. Make sure the kids are even more ethnically diverse. Keep the BMXs.” The result is The Rim of the World (May 24).

“I like the Southeast Asian bits in Master of None. And The Big Sick. So let’s go all Asian. Korean vs Vietnamese/Chinese … perfect, but make sure they’re like all other American privileged city folk.” The result is Always be my Maybe (May 31).

“Allison Williams was scary in Get Out. And sexy. Let’s find something else in which she can be scary and sexy. Just make it up as you go along.” The result is The Perfection (May 24).

But to be fair, there are no twin films – yet. That will depend on how many times they’re downloaded.