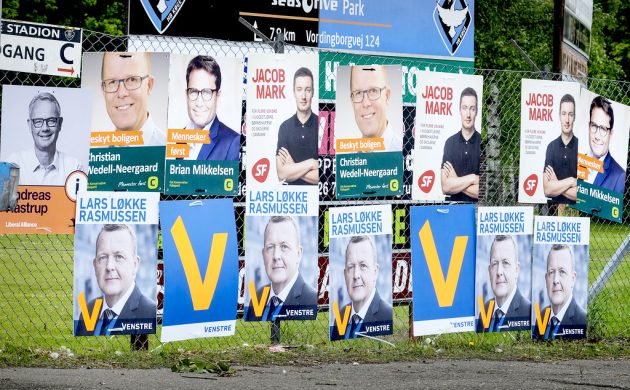 Lagging behind in the polls, PM Lars Løkke Rasmussen’s number would appear to be up.

However, Venstre’s performance in Sunday’s European elections suggests his party is fighting back.

But with the other blue bloc parties losing support, is it too little to late, given the strength of the red bloc.
Last issue, CPH POST assessed three key battleground issues: health reform, the welfare state and taxes.

Now to complete the picture, we are taking on immigration, climate and education.

READ ALSO: Game of clones: the battle for middle ground

With the global environment at crisis point, climate is one of the major issues in the election.

During a recent televised debate, eleven leaders raised their hands when asked who had the most ambitious policies, only Nye Borgerlige and Dansk Folkeparti kept their hands down. And it is not surprising the majority of the leaders want to be at the forefront of the debate – a recent Norstat poll reveals that climate change is one of the most important themes for voters.

Blue Bloc
Venstre wants to stop the sale of petrol and diesel vehicles by 2030 – and by 2035 to only have zero-emission cars. It also wants a new climate law to develop technology and agriculture.

Technology is also a key focus of Liberal Alliance, which argues that new solutions are necessary if Denmark is to meet its goal of being CO2-neutral by 2050. It wants to set 0.2 percent of GDP aside for a climate research fund – the equivalent of 3.7 billion kroner every year.

Dansk Folkeparti has been criticised for being the only party without a comprehensive plan. It supports initiatives employing common sense − policies need to be based upon “knowledge and not current trends”. The party wants more focus on energy technology in order to make the transition as cheap as possible. It also encourages people to buy locally-produced products and wants a reorganisation of the registration tax so that environmentally-friendly cars are favoured.

Nye Borgerlige believes that people will start to buy electric cars once it’s cheaper, and that the market will solve the climate crisis with little interference from the government.

Red Bloc
Socialdemokratiet wants binding frameworks that require future governments to report on the status of climate and make necessary adjustments every fifth year. The goal is to make Denmark free from fossil fuels by 2045 – instead of 2050, which is the current goal. It wants to invest 20 billion kroner into a new, green future fund to help solve challenges posed by the climate crisis on a global level.

Key support party SF mostly shares the same outlook as S, but wants to adopt a different approach regarding mandatory targets for the reduction of CO2 emissions annually.

Enhedslisten wants biennial checks of Denmark´s greenhouse gas levels, contending the government needs solutions if targets are not being met.

Alternativet leader Uffe Elbæk wants the issue to “overshadow” everything in the election. It thinks that S’s targets are not ambitious enough. It wants to see a 100 percent reduction of greenhouse gases by 2040 – a decade before S’s target. Alternativet does not believe the problems can be solved with technology alone, as these problems are closely related to industrial production and increasing consumption.

Maintaining a fairly low profile in the election coverage thus far, there is an emerging consensus on a key issue: the education ceiling.

Since its introduction in 2016, the Uddannelsesloft education ceiling has become an increasingly unpopular aspect of public savings. It essentially threatens to punish those who later regret their choice of study (e.g bachelor’s degree) by not allowing for further state-funded education at the same or lower level. There are professional and vocational exemptions, and a six-year limit to the rule. However, it now looks as though the charges have been set in all corners of the room.

Red Bloc
Together, the red bloc all agree on free and equal access to education, all well as removing the ceiling. Socialdemokratiet wants to encourage variety, thus allowing people to pursue the path they wish. This means the focus does not have to be the classic long academic education, and that vocational training should be well-funded.

This sentiment is echoed by SF, which is also keen on additional funding for vocational training. Whilst the educational journey should not be prescribed the same way for everybody, there should be stronger collaborations between universities and employers. SF wants to promote academic content that transfers into the world of work.

Alternativet appears to have a strong focus on the needs of different students, advocating a principle that learning at any level should begin and end with the individual. This is supported by a nine-point policy on schools, which includes a greater focus on sustainability – more creativity with less focus on grades and tests.

Radikale would not only like to abolish the education ceiling, but also remove limits on international study places. This is part of an ambition to see an education system that is both outward-looking and inviting in order to promote an international study environment. Radikale also acknowledges Denmark’s spatial development issues with an ambition to create more study places outside the major cities.

Like many of the red bloc, Enhedslisten want to ensure the SU financial student support is a proper amount that students can live on. Education should be flexible, allowing for study regardless of learning speed and age. Research should be free from business interests.

Blue Bloc
The VLAK government may have introduced the education ceiling, but only Konservative says the ceiling must remain. Shots were fired last week when its leader Søren Pape Poulsen questioned the credibility of his colleagues’ sudden change in attitude. He suggested it was untrustworthy to flip-flop on the issue so close to an election. Regarding general approaches to teaching, the party believes in retaining grade systems and shorter school days.

LA wants to not only abolish the education ceiling, but to also uncap how much students may earn alongside SU. This falls in line with LA’s general philosophy of keeping money in people’s pockets for a strong economy – they’ll probably spend it.

Tommy Ahlers of Venstre has also joined the retreat, but cautions that removing the ceiling would need an extra 300 million kroner from the budget. The party would also like to maintain the coupling percentage for free schools – i.e 76 percent subsidy per student.

Dansk Folkeparti believes in placing equal importance on manual and intellectual labour, along with a free choice between state and private schools. Furthermore, the publication of grades can incentivise schools to be better.

In similar fashion, Nye Borgerlige has only one stipulation in its otherwise hands-off approach: publicly-funded schools should be based on Danish values and democracy.

Overall, it would seem peer pressure isn’t restricted to school.

Denmark’s next PM probably won’t soft-pedal on immigration policies and there might be less tolerance on immigration and more racism from both sides of the political spectrum.

More stick than carrot
Last year, the centre-right government’s burqa ban made worldwide headlines, with its fines of up to 10,000 kroner for repeated offences. The ban was passed by both the centre-right and left parties.

It was also decided that if necessary, immigrant families must enrol their children in extra schooling to be exposed to ‘Danish values’.

“There are two main arguments why non-western immigrants are being discouraged. Other than culture, economically it’s expensive for the state to take these immigrations,” Nils Holtug, professor of political philosophy at the University of Copenhagen, told CPH POST.

“In contrast, western immigrants bring in a net benefit of 30 billion kroner.”

Several waves
There have been various waves of immigration since the beginning of the 1960s when a large number of Turks made their way to the Nordic countries as ‘guest workers’.

In 1983 Parliament passed a ‘Memorandum on migration policy’ that was implemented by the Danish Refugee Council and similar organisations. But over time, the act failed in its work of integration and many of these refugees remained unemployed.

There have been developments on immigration policies – specifically regarding Muslims. In 2016, new laws were promulgated by Venstre and its coalition partners aimed at preventing extremists from entering the country. Those who obtained residence permits had to swear under oath they would not pose a threat to public safety.

Asylum island
Under pressure from Dansk Folkeparti the island of Lindholm, originally used to quarantine sick animals, has been designated as a place to house asylum-seekers who have been convicted of crimes but cannot be deported for various reasons.

“It’s certainly a controversial project. The symbolic value is clear – seeing how it’s quite expensive to put immigrants there,” Holtug says.

Immigration and integration minister, Inger Støberg, has spoken out against these rejected asylum-seekers very negatively. “They are unwanted in Denmark – and they will feel it,” she wrote on her Facebook page.

Red Bloc
Socialdemokratiet is split on issues such as the economy and whether to drift towards the left, while its immigration policy lurches towards the right after having lost voters to the anti-immigration Dansk Folkeparti in the 2015 election.

Radikale isn’t happy with these adjustments and has said it will not support Socialdemokratiet’s Mette Frederikesen as prime minister in a possible coalition unless it drops its collaboration with DF on immigration.

At the other end of the spectrum, SF wants a more humanist approach to refugees based on the UN quota system rather than spontaneous asylum.

Enhedslisten is also in favour of a more liberal approach and says it would repeal the controversial 24-year-rule brought in to preventing arranged and forced marriages.

Alternativet wants a society built on solidarity and respect for the individual and for their cultural roots.

“The views of both parties differ, as DF is advocating that would-be immigrants should stay where they are because they shouldn’t be here in the first place,” explained Holtug.

Venstre on the other hand takes a broader view, supported by industry bodies who argue that Denmark is facing a shortage of labour.

“There is a larger acceptance that immigrants should be integrated because they could be here for a long time,” added Holtug.

Konservative has vowed to confront what it calls the parallel society head on: foreigners must learn Danish, immigrants should support themselves, anyone wanting citizenship should embrace Danish values, and asylum-seekers should seek asylum outside Denmark’s borders.

Liberal Alliance feels the best path to integration is through the labour market. Denmark should be open, it contends, and welcome to those who want to contribute and closed to those who don’t.

Dansk Folkeparti would appear to be losing support among voters with extreme right sensibilities to two new parties, Stram Kurs and Nye Borgerlige, which will do just about anything to tighten immigration policies.

Stram Kurs (hard line), with Koran-burning lawyer Rasmus Paludan at the helm has made the most of the headlines generated by fierce riots in the city in April. The irony might be that only Dansk Folkeparti has said it will collaborate with Stram Kurs.

Potential casualties: Students caught up in this mess