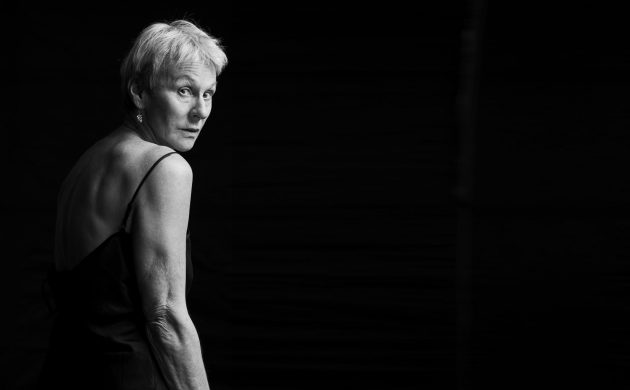 Staged and directed by Solbørg Højfeldt and starring resident actress Sue Hansen-Styles, the play follows the thought-stream of a woman trapped in a conversation with herself after betrayal and abandonment by her ex-lover. Delirious from alcohol she recalls the trauma and tries to come to terms with her isolation. Teatret Ved Sorte Hest’s small space provides the perfect setting for this intimate study.

At the outset, the audience is greeted with a dark stage and three black panels. One opens to reveal a phonebox-size cuboid structure from which Hansen-Styles’ character walks into view.

The character’s struggle to remember people and place names is an all too relatable experience for many in the audience and provoked laughter. But this doesn’t last, with the tone slowly becoming more serious as she emerges as increasingly disturbed and desperate to remember details.

Hansen-Styles captivated my attention with the subtlety of her expressions and movements, and the speed at which she shifted between them. From the slight opening of her mouth, to the quick, panicked twitches and turning of her head, she convincingly depicts the unself-conscious psychosis loneliness can cause.

The set design was very successful. Its simplicity perfectly conveyed the emptiness of the character’s life, thus focusing the audience’s attention. The audience is trapped in this experience with her. All the panels open and close at various points throughout the play to reveal and then hide blurred mirrors. The unresolved reflections help to convey the lack of clarity she is reaching in her tumultuous, booze-infused monologue.

Of particular interest to me was the clever use of shadows, for which Lasse Svarre, in charge of light and sound design, and lighting technician Beáta Kublik deserve high praise. Changes in the light accompanied the intermittent presence of the mirrored panels, and the clever positioning of Hansen-Styles by Højfeldt allowed suggestive castings of her shadow. These shadow selves – sometimes overlaid, sometimes to either side of her, sometimes lingering far behind – are her only fragmenting company.

Be aware that the narrative is dark, not the easiest to follow, and the lines are often repetitive. The play will therefore not appeal to everyone. Even for keen theatre-goers, with only one character and such a minimal set, its duration of just over an hour was long enough.

Least satisfactory to my mind was the surprising ending, which left me rather confused and perhaps distracted from the otherwise excellent performance of Hansen-Styles.

Overall, though, I enjoyed the play. The majority of the audience agreed, giving the performance a standing ovation at the end.