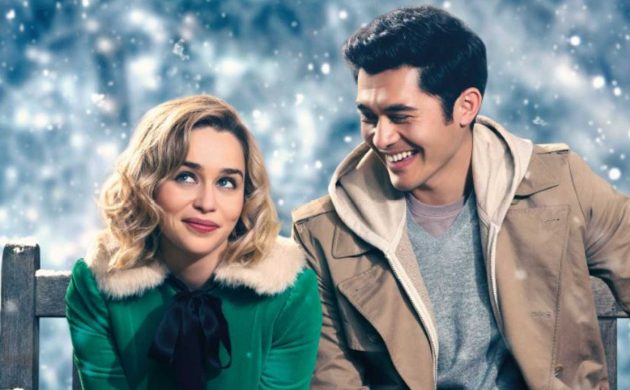 Surely Will Ferrell would have been a better fit for George Michael
November 15th, 2019 1:31 pm| by Ben Hamilton

Researching this column I got the impression that Bruce Springsteen learned to sing like Bruce Springsteen from Manfred Mann’s Earth Band. While Bruce has famously never had a number one single in the US, MMEB topped the charts with a cover of his first-ever release, ‘Blinded by the Light’, in 1977. The difference between the 1973 folk rock original and Springsteen-like cover are startling.

Blinded by the Light, of course, is the title of an acclaimed film released this year about the Boss’s influence on an Asian teenager growing up in 1980s Britain, and there would certainly appear to be a trend for naming films after songs over the past year. From Bohemian Rhapsody to Rocketman to Yesterday, it’s often an obvious choice.

Whammed by the twist
But with Last Christmas (51 on Metacritic; Nov 14), we sense a shameless attempt to cash in on the popularity of a song and back catalogue before anyone has had the chance to adapt Andrew Ridgeley’s memoir Wham! George & Me, which was released last month.

The problem with most back catalogue films is that the audience find themselves emoting because of the music, not the corny subject matter, and it undoubtedly helps if the artist died before it was their time. It’s outright manipulation, although it might be a tall order writing such a scene to accompany the song ‘You sexy motherfucker’. Be assured though, that film is coming.

Last Christmas, which stars Emilia Clarke (Blondie from Game of Thrones) as a Xmas store worker in London who has unaccountably managed to have a “shit life” despite her good looks, was co-written by Emma Thompson (who co-stars), although like her screenplay for Sense and Sensibility, it’s fair to say it’s another adaptation – this time of the collected works of Richard Curtis. One wonders, given the massive twist at the end, whether Emilia Clarke also had some input.

Stable full of stallions
They could have called The Irishman (94; at selected cinemas from Nov 21; on Netflix from Nov 27) ‘In the Still of the Night’ given the way the 1956 song by the Five Satins pretty much scores Martin Scorsese’s 219-minute epic charting the story of the 20th century’s most renowned vanishing act, Jimmy Hoffa. Given the vampirist working hours of the average hoodlum, it’s an apt choice.

All the greats from the last 50 years of gangster films and TV series are here.

In this day and age, when all the Oscar nominees cynically come in at two hours and five, it’s refreshing to note that someone still has the balls to deliver a Ben-Hur.

Will capture your attention
The Irishman’s ensemble is perhaps a little too full at the seams with clout – a bit like the Harry Potter universe, or 2017 release Tulip Fever, when every single actor is a star and it gets distracting – but you couldn’t say the same about The Crown (86; Netflix from Nov 17), which is rebooting as it takes on the period spanning 1964 to 1977.

For every Olivia Colman and Helena Bonham-Carter (the new Windsor girls), there are unknowns taking on significant parts (Prince Charles, Princess Anne and Camilla Parker-Bowles), which bodes well for the casting in general. Given they’ve cast actors to play the crew of Apollo 11 along with astronomer Patrick Moore, one presumes the1969 Moon Landing is carrying an entire episode – exactly how is anyone’s guess.

More of a safe bet is The Capture (Nov 26; C More), a London-based surveillance series starring Holliday Grainger that wowed the critics in Britain.

Riskier is Servant (Nov 28; Apple Plus), which has gambling tendencies of its own given its publicisation of M Night Shyamalan as executive producer and the director of the opening episode. The horror series begins with the hiring of a nanny to look after a recently bereaved couple’s baby substitute: a creepy doll. A promising cast is led by two more Brits impersonating Americans: Toby Kebbell and Rupert Grint.

Looks a bit like Rush 2
Is Matt Damon the only American actor allowed to play one? Echoing the spirit of Rush, Damon and Christian Bale (token Brit) are hell-bent on ending Italian dominance in Ford vs Ferrari (73; Nov 14; at cinemas) – a 152-minute, high-octane thumper of a film that is mostly being called Le Man ’66 in Europe for unclear reasons.

It’s likewise hard to figure out the motive for the killer app in Countdown (Nov 21; at cinemas) or for John Travolta’s decision to star in stalker affair The Fanatic (19; Nov 20; Amazon Prime) in which he appears to be impersonating Mark Chapman.

The release bucks what is a strong fortnight for Amazon, with The Souvenir (92; Nov 14; Amazon), feel-good comedy Brittany runs a Marathon (72; Nov 15; Amazon) and post-911 thriller The Report (76; Nov 29; Amazon) all recommended – along with Earthquake Bird (50; Nov 15; Netflix), but only because the central character (Alicia Vikander) is an expat.

Elsewhere in TV land, there’s the usual consignment of returning series – How to get away with Murder (S5; Netflix; Nov 23), Ray Donovan (S7; HBO Nordic; Nov 18), Tom Clancey’s Jack Ryan (S2; Amazon; Nov 1) and The Man in the High Castle (S4; Amazon; Nov 15) – and an unpromising festive comedy Merry Happy Whatever (Nov 28; Netflix) that didn’t even bother filtering the laugh track out of the trailer.

We’re not holding our breath about the new series Dolly Parton’s Heartstrings (Nov 28), which to bring us full circle has called its opening episode ‘Jolene’ and promises to showcase “the stories, memories and inspirations behind Parton’s most beloved songs”. That’s Dolly ahead of the curve for a change.