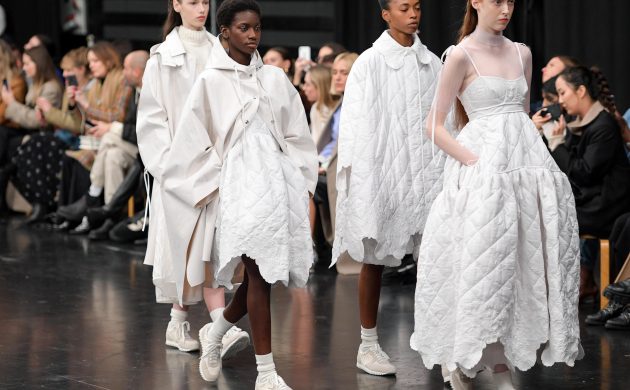 My fifth season covering Copenhagen Fashion Week (CPHFW) has left me with the impression that the fashion industry is on the brink of actual change.

Sustainability is in fashion
On the very first day (Jan 29), several of the world’s leading media (The Guardian, Vogue UK, Vogue Business) named CPHFW the most sustainable fashion week in the world.

The reason for this bold statement was a three-year action plan unveiled at a press conference just before the official opening show. At first, the reaction in the press room was one of suspicion. There was justified concern that these statements of intent end up as unread paperwork – neither followed through with nor acted upon.

This time around, the Sustainability Action Plan 2020-2022 is based on the UN Sustainable Development Goals and includes rather specific requirements for brands.

Specifically what this means is that in order to show at CPHFW, brands have to use at least 50 percent-certified organic, upcycled or recycled materials – and only sustainable packaging by 2023. Another important requirement that the Action Plan dictates is that brands must stop destroying unsold clothes.

With these requirements the biggest fashion week in Scandinavia is setting the bar high, and its organisers are positioning themselves as pioneers, pushing the industry towards an environmentally-conscious agenda that’s already sweeping the globe.

“Copenhagen Fashion Week is the cultural and commercial meeting place of the Scandinavian fashion industry,” contended Cecilie Thorsmark, the CEO of CPHFW.

“This gives us an enormous responsibility and the potential to create impactful change in the industry at large. By taking this direction, we are going from being a traditional event to being a platform for industry change.”

No clothes, no models
The Danish brand Carsel uses 100 percent natural materials and the labour of female prisoners from Peru and Thailand. Carsel opened this season of the fashion week in thought-provoking fashion – without models and without clothes.

Carsel explained the idea of the show on Instagram: “We think that fashion weeks are more important than ever, but we need to change the conversation and the format.”

After a short film about fashion insights and ways to put the industry on a greener track, the guests were asked to step up onto the catwalk. Influencers, buyers, photographers and journalists were left walking the naked-white catwalk to reflect on the sustainability of their own wardrobe as well as the impact that they, as consumers, have on the industry. Thank you, Carsel, for that opportunity to reflect. 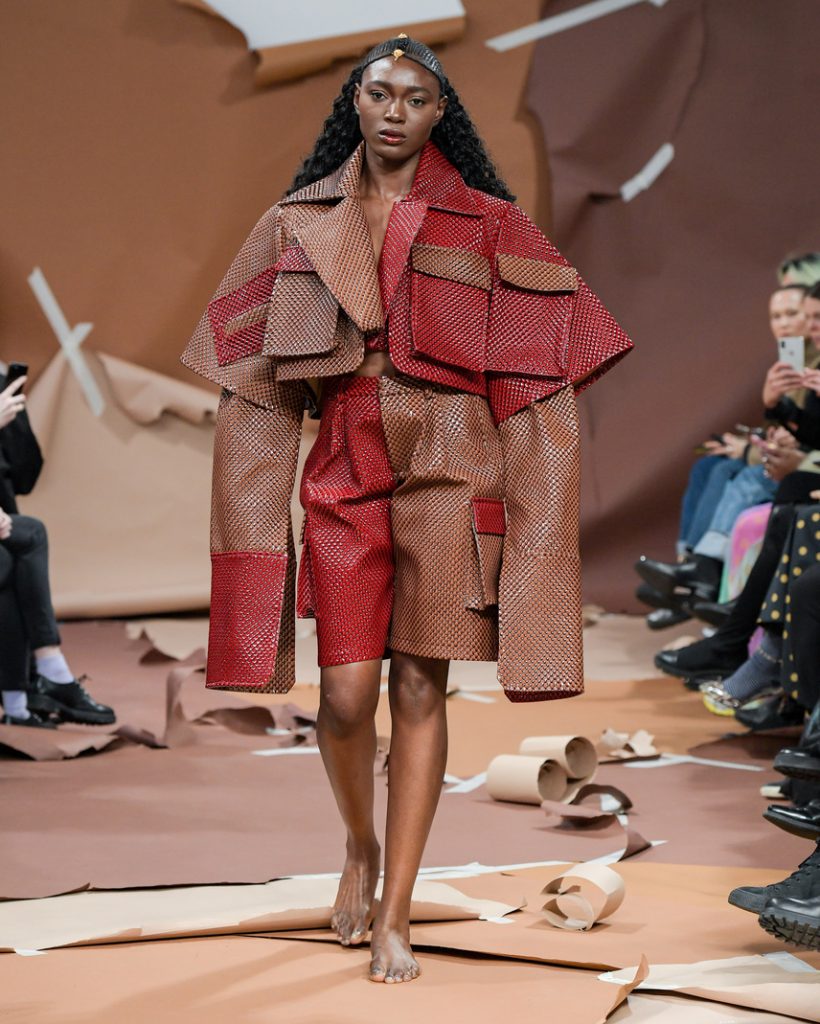 Selam Fessahaye, a Swedish-Eritrean costume designer, left an unforgettable mark on the Danish runway. Her show was significant for its diversity and absence of racial and body stereotypes.
“As a black woman in Sweden, everything I do is political,” says Fessahaye.
The models came out wearing hyper-sleeved jackets, giant coats, and voluminous dresses. Complex textures and materials, Eritrean jewellery from Fessahaye’s mother and grandmother – every detail came together on the runway.
Each minute of the show paid tribute to the women who fought alongside the men for the liberation of Eritrea against the Ethiopian Army. These roots and traditions are the basis and inspiration for the work of this designer.
Despite being at the beginning of her career, she has already been named the Swedish fashion miracle. And we are not questioning that for a minute.
Can’t stand up? Stand out!
Sisters Ailbhe and Izzy Keane could be introduced in many different ways, be it Forbes 30 Under 30, Irish multi-award-winning entrepreneurs or pioneering disability fashion brand owners. 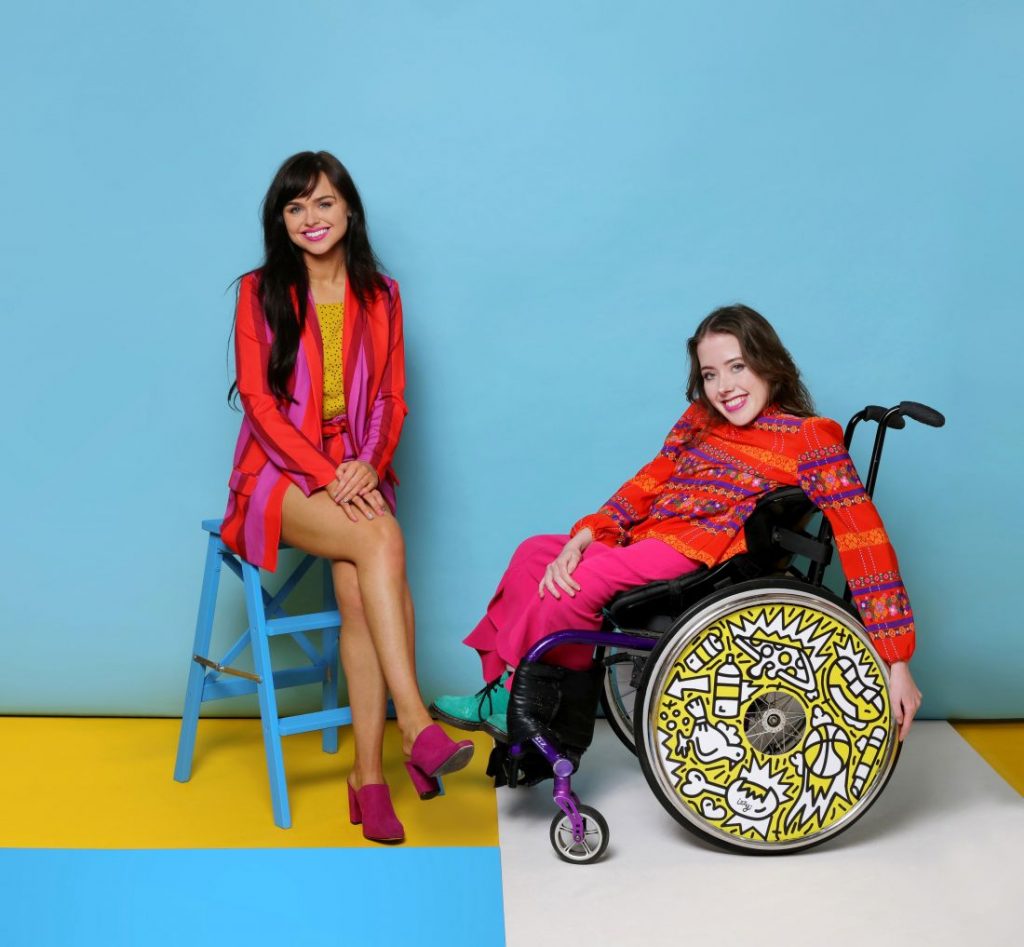 “These two founders of ‘Izzy Wheels’ encompass all of what we celebrate: creativity, ingenuity, leadership, care, and entrepreneurship,” explained Irish ambassador Adrian McDaid as he met the young women at an official CPHFW event.
The girls arrived from Dublin to share their story of success and the importance of disability fashion. At the age of 25, Ailbhe Keane created ‘Izzy Wheels’ as her final year project at the National College of Art and Design.
She was inspired by her sister Izzy, who was born with spina bifida and remains paralysed from the waist down. Nevertheless, the younger sister always had a strong passion for fashion and as a child decorated her wheelchair with flowers and ribbons.
Ailbhe’s school project went viral after the girls shared it on social media. People from all over the world started sending them messages of support and inquiries about where they could buy these fashionable wheel covers.
That was the breaking point at which the sisters started their online store, which today ships to 35 countries. Izzy and Ailbhe have already worked with notable artists including Timothy Goodman, Steve Simpson, Lucy Tiffney and Callen Schaub.
“Izzy Wheels empower wheelchair users to make a statement about themselves – it transforms a person’s wheelchair into a friendly object rather than something purely functional,” proclaimed Izzy, the ‘Izzy Wheels’ brand ambassador.
The mainstream impact of the brand was seen last year as ‘Izzy Wheels’  collaborated with one of the world’s most powerful women in plastic: Barbie.
Fans of the doll can now accessorise Barbie’s wheelchair and get the same cover for their own full-scale wheelchair.
Pink elephant in the room
Henrik Vibskov’s AW20 show took place at an old factory where trains used to be repaired and manufactured. Sipping beer and cider, guests found their seats along the catwalk.
Before the show had even started, a line-up of surreal pink bathtubs donning elephant-trunk like taps left everyone in anticipation. As the music kicked in, we saw dancers appear from inside the bathtubs.
This ‘living scenery’ was a lovely artistic accompaniment to the show, which was appropriately named ‘Please Remove Before Washing’.
The creation of spectacular and surreal universes is Vibskov’s signature style. 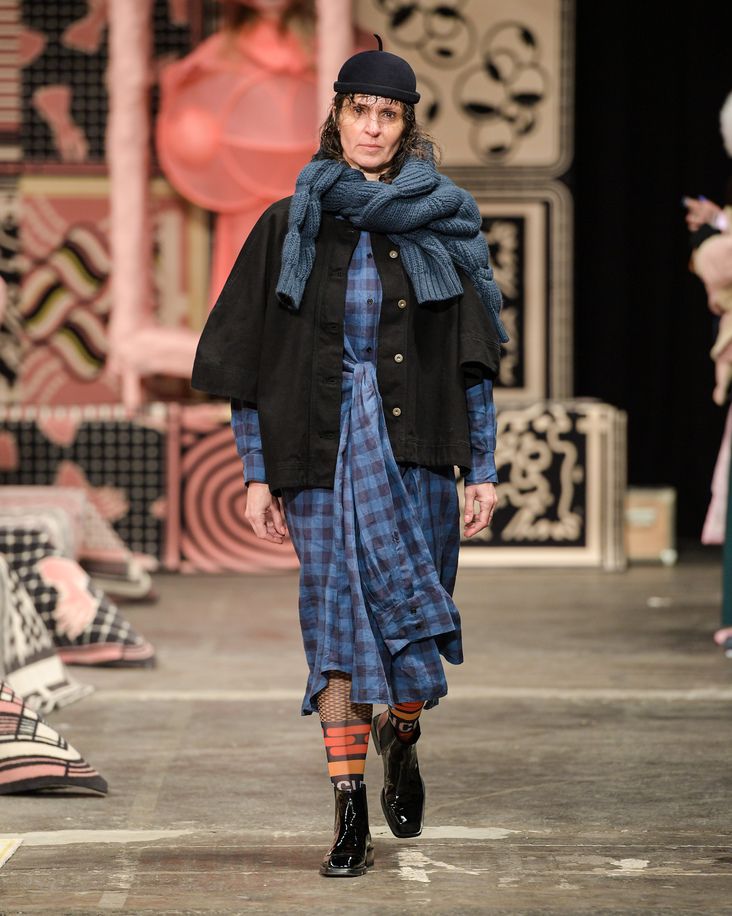 The same can be said for his vivid prints. For autumn and winter one of the designer’s central ideas was wrapping yourself in beautiful patterns. The standout motifs were green and mustard-checkered as well as red and navy running-water.
As a top layer Vibskov uses deconstructed suits and outerwear. The assembled image is complete with a knitted sweater worn instead of a scarf and a sink (see top right) worn instead of a bag. 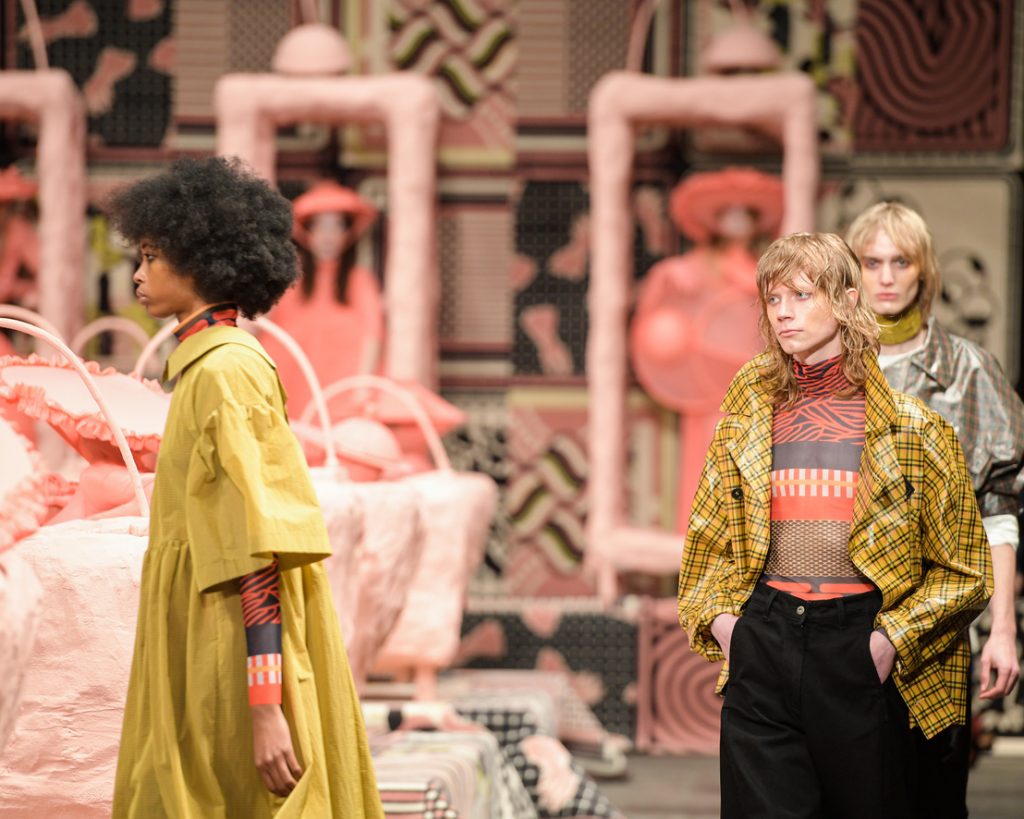 Sticking to his old aesthetics, the designer still keeps an eye on the future. Some 95 percent of his extraordinary collection is made from sustainable materials, and all of the jackets and coats are made from recycled PET bottles.
So what should we wear in AW20?
In general, the Copenhagen stage is not for buzzy labels that live and die quickly. Most Scandinavians appreciate slow-living, and most of the Danish brands gravitate towards timeless pieces that will stay in vogue for a while.

Most of the participants in CPHFW are brands that have relied on gradual, ‘anti-hype’ growth. However, there were several new ideas on the catwalk that you might want to consider for your wardrobe in AW20. 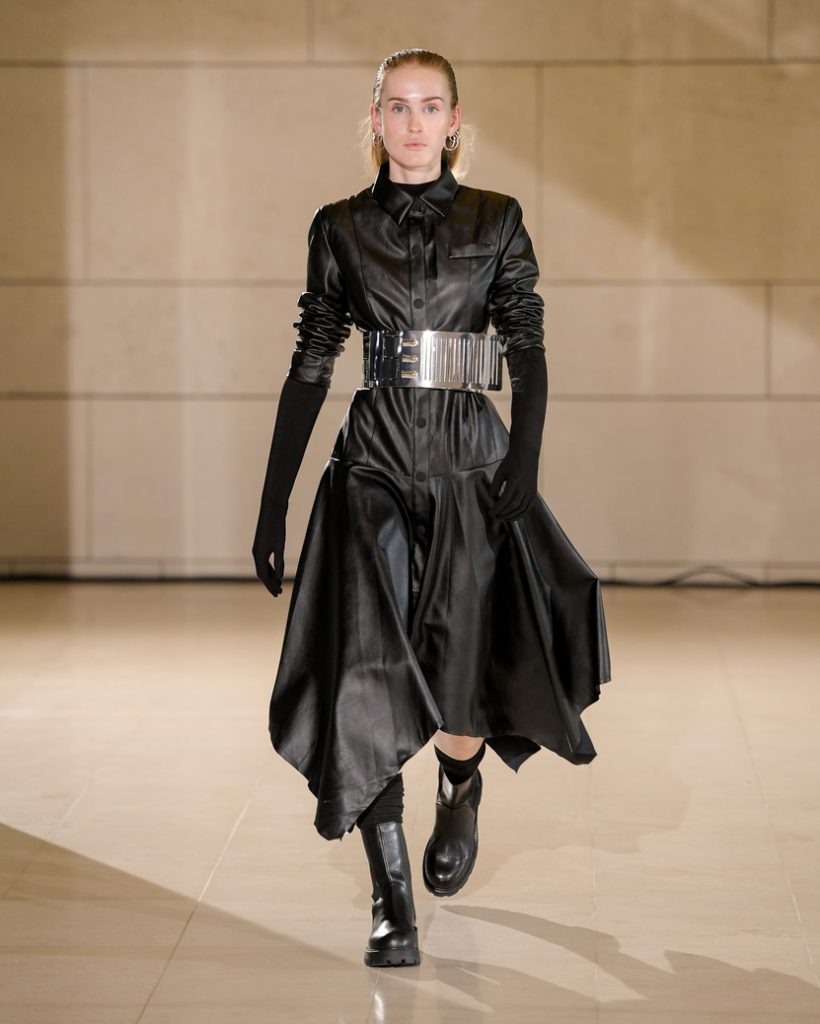 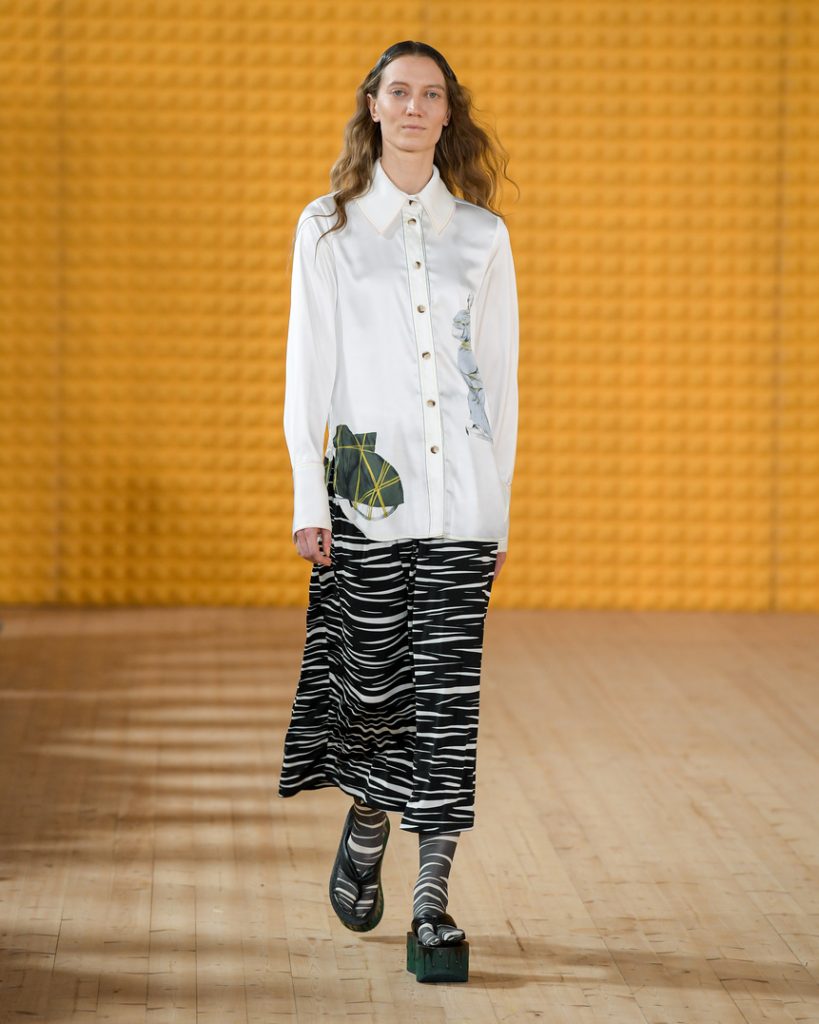 Instead of just wearing a piece of fabric, wear a story. Look to Stine Goya and her collection ‘On Air’ capturing the ‘building-wrap’ essence of artists Christo and Jeanne-Claude. True to the Stine Goya DNA, hand-painted prints transmit the artist’s architectural vision directly onto the garments. 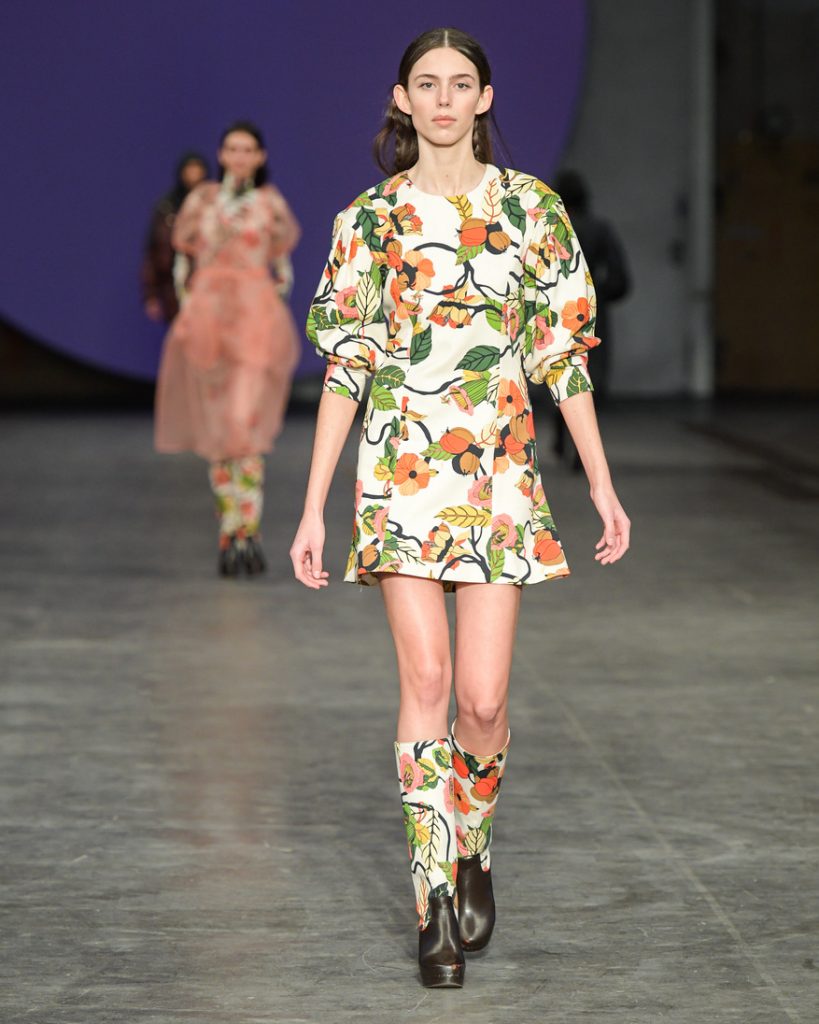 We are already in love with the bright comeback of the 1970s vibes. Danish designers are suggesting we stick with this trend for another season – even if the cold weather does eventually come. Wide-collar shirts, peasant blouses and a splash of checked patterns – wear it all and don’t forget to release your flower power!