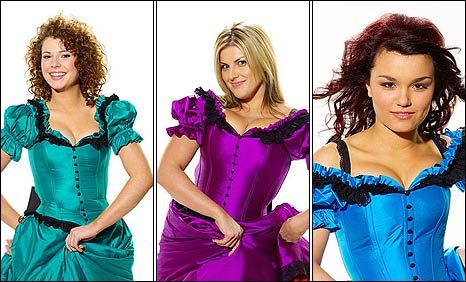 Long before #MeToo, ‘I’d do Anything’ was poorly named. Fortunately Lord Webber is the original Nancy’s boy
April 30th, 2020 6:30 pm| by Ben Hamilton

For every Daniel Day Lewis or Joaquin Phoenix, actors who petulantly announce their retirement every cycle (we mere mortals only exist in their orbits) to bring gravitas to the film they decide to make their comeback in, there are many who remain retired and dead to us – it doesn’t say much for their talent that we barely miss them at all.

Gone are the days when the really big names kept on working into their graves, heroically battling cancer of the mouth with a Chesterfield tremulously hanging from their top lip as their lines were dubbed by a RSC student, destined to one day be a really difficult answer in a quiz.

Jack Nicholson will never give up womanising, but acting … he dispensed with that years ago. He hasn’t made a film since 2010, apparently because he kept on forgetting his lines, but that can happen to the best of us after a hard night partying with the Bolivian marching powder. Gene Hackman, anyone? Exactly … 2004 was the last time he buckled up, a year after Sean Connery called it a day.

In the absence of the retiring stars of the 1960s and 70s, the crusty parts are increasingly being filled by those who cornered the adult male roles in the 1980s, and often it feels as if the likes of Jeff Bridges, Kurt Russell and Richard Dreyfuss are playing parts ten years too old for them.

Dog grooming – the worst kind
Another such actor is Nick Nolte, who has been cast alongside Matt Dillon (along with another incomprehensible role for Emily Mortimer and her plummy voice) in Head Full of Honey (22 on Metacritic; May 4, Netflix), as a patriarch with Alzheimer’s disease who is taken on a trip to Venice to unclog some memories. We’re not sure the whimsical approach won it many fans.

The same was true of Show Dogs (31; May 17; Netflix), which already had one of the worst plots of all time. A policeman and his dog go undercover and enter the US equivalent of Crufts. Even worse, there are talking dogs (so it’s basically a film for children). And even worse, it contains a scene in which the dog has to grin and bear it when the judge touches its genitalia, which many concur sends out a message to kids that they should do a similar thing if an adult touches them in this way.

From the worst to the best, we have Wild Rose (80; May 28; cinemas if they’re open), which like Head Full of Honey was first released in 2018, starring Jessie Buckley as a Scottish woman harbouring a dream to become a country and western singer in Nashville. In Irish actress Buckley, who first became famous after nearly winning the Andrew Lloyd-Webber singing contest show I’d Do Anything in 2008 (left in photo) and has since appeared in Chernobyl and Judy, cinema has discovered a true star with unlimited potential.

Giving Rose a fair old war of the roses is Emma Rose, the first-time director of Saint Maud (76; May 28; cinemas), another horror film championed by A24, a US producer carving out a niche with unlikely choices such as The Witch, Hereditary and Midsommar. Danny Boyle remarks that this tale of a care worker who might just be possessed has “confidence that evokes the ecstasy of films like Carrie and The Exorcist.”

We want black Boardwalk!
The film Superfly (52; May 10; Netflix) also owes a debt to 1970s cinema, but not classic horror. However, even the always wonderful Michael K Williams can’t rescue this blaxploitation remake from the shallow end of the pool. More promising is contemporary black gangsta thriller All Day and a Night (May 1; Netflix), which includes Williams’ old Boardwalk Empire sparring partner Jeffrey Wright in the cast.

A notch above is Betty (May 8; HBO Nordic), a New York-based female skating series that continues the story of the 2016 film Skate Kitchen with the same director, Crystal Moselle (The Wolfpack), onboard. While The Eddy (May 8; HBO Nordic), which follows the exploits of a black musician trying to make a living in Paris, also looks promising. Damien Chazelle (La La Land, Whiplash) directs the first two episodes.

Staying with the gangsters, British series White Lines (May 15; Netflix) looks like it could be a lot of fun. Twenty years after the disappearance of her ghastly superstar DJ brother on Ibiza, Zowie (Laura Haddock) starts to glue the pieces together. Made by Álex Pina, the creator of popular Spanish show Money Heist, Daniel Mays co-stars in what could be a riot on a par with the best of Nick Love.

The men from ‘About a Boy’
Overall this month’s crop of television is dominated by the US, although there are of course quite a few British actors stealing roles from their American cousins.

Hugh Grant is back in The Undoing (May 11; HBO Nordic), a psychological thriller miniseries directed by Denmark’s very own Susanne Bier, which stars Nicole Kidman as a woman who has been accused of, you know, important stuff that is unclear in the trailer.

Grant’s co-star in About a Boy, Nicholas Hoult, lends Elle Fanning able support in The Great (May 16; HBO Nordic), a darkly comical look at the rise to power of Russia’s most famous ever tsarina. It looks deadly funny.

John Hannah has gravitated to an old sage role in Transplant (May 11; CMore), a new hospital drama that could be the next ER. The title partly refers to the central character’s switchover from a hospital in Syria.

And a promising May is completed by murky financial drama Devils (May 10; CMore), Ryan Murphy’s ambitious 1940s-set tinseltown politics series Hollywood (May 1; Netflix), in which he again teams up with Darren Criss, the star of The Assassination of Giani Versace, and Space Force (May 29; Netflix), which is being billed as a continuation of the vibe of The Office (with Steve Carell), but in outerspace.

Turdier most Fowl
Elsewhere, among the returning series we have Penny Dreadful: City of Angels (S4; April 27 – a spin-off from the original with Natalie Dormer taking over from Eva Green), Billions (S5; May 4), Miracle Workers (S2; May 14) and Doom Patrol on HBO Nordic, and Dead to Me (S2; May 8), Dynasty (S3; May 23) and Workin’ Moms (S4; May 6) on Netflix.

No trailer was available to judge whether Sweet Magnolias (Netflix; May 19) is as sickly sweet as the film it stole part of its title from. While Jerry Seinfeld: 23 Hours to Kill (May 5; Netflix) sounds like it might be a day overlong.

And we also have quite a few unpromising looking films, starting with Greyhound (May 7; at cinemas), a WWII sea yarn starring Tom Hanks. With all the CGI onboard, The Polar Express looks more life-like.

Like a Boss (33; May 7; at cinemas) sounds a little too like one of our puff business features. A couple of business owners get a new investor … yawn! While Artemis Fowl (May 28; at cinemas) confidently strolls into that realm of fantasy that only ever delivers duds: kids playing as adults fiction. Both films look like utter crap.

The Woman in the Window (May 14; at cinemas), a Rear Window remake that stars Amy Adams, Julianne Moore, Jennifer Jason Leigh and Gary Oldman, does look promising, but we’ll reserve judgement. And the same goes for romcoms The Lovebirds (May 22; Netflix), The Half of It (May 1; Netflix) and Stargirl (60; May 19; HBO Nordic).

It’s a bit like when one of your favourite actors comes out of retirement: best to see their work before you start celebrating.