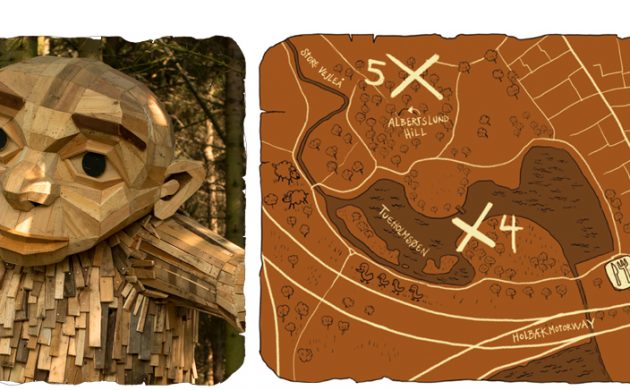 Danish artist Thomas Dambo, who has become famous in Copenhagen for designing five giant trolls situated in the capital’s suburbs, is building a new statue in Amager.

However, due to his financial situation, Dambo is seeking support from the public through a funding project called the ‘Support The Giant Troll Folk Fest-Amager‘, which is accordingly selling posters.

Buy posters to support project
The posters, which cost 600 kroner apiece, feature one of the trolls, Little Tilde at Vallensbæk.

The posters are signed and numbered individually. Profits will be used for the recycled-material used in the new artwork in Amager.

Øresund trains back to normal schedule and routes
DSB and  Skånetrafiken have decided to schedule more Øresund trains starting on June 8 in a bid to reduce the risk of congestion when more people start to commute again between Denmark and Sweden, reports NewsØresund. The number of trains was reduced amid the Coronavirus Crisis. Soon trains will be running again every 20 minutes from four in the morning to midnight. In line with the new schedule the routes are changed back to normal as well – trains will be operating all the way between Gothenburg and Copenhagen without having to change in Malmö, which was a temporary detour in the past few months. However, the border control at Copenhagen Airport will remain, where trains will stay for 20 minutes. Passengers need to book a seat in advance through DSB’s app, ticket machines or on the website in order to ensure proper distancing between fellow passengers.

Facade of exclusive tower block is disintegrating
According to Politiken, the facade of the 100 metre-high Bohr’s Tower in Carlsberg is cracking up. The tower, which boasts 88 exclusive apartments, was completed just three years ago by Carlsberg Byen. There are fears that pieces of the façade might fall. Kbhliv.dk anticipates that the owner of Bohr’s Tower will sue Carlsberg Byen.

Potential outbreak for pets in Valby
A virus has been spread among animals in Valby, according to kbhliv.dk. Valby Animal Clinic is concerned it may be an outbreak as the clinic has over the past few weeks had several dogs admitted for intensive treatment for parvovirus. The virus affects a dog’s gastrointestinal tract and can be fatal if the dog is not vaccinated. When a dog is diagnosed with parvovirus, it must be treated immediately with six to seven different types of medication administered intravenously, the clinic’s veterinarian told Kbhliv.dk. The clinic is trying to contain the infection by closing down the pasture area in front of the clinic and disinfecting its facility.

Dead body found in Christiania’s toilet
A 58-year-old man was found dead early on Sunday morning in a public restroom at Christiania. According to eb.dk, police are treating the death as a suspicious one, but say it would be premature to make a definite conclusion until an autopsy has been carried out. The body was found by another person who tried to give him first aid. The dead man was not said to be involved in any criminal activities, Ekstra Bladet reports.

Every pupil in Frederiksberg gets a zoo card
In accordance with the decision by the education committee consisting of Konservative Folkeparti and Socialdemokratiet, all primary school students in Frederiksberg will be receiving zoo cards. According to Kbhlive.dk, a total of 200,000 kroner has been allocated for the purchase of school cards, which can be used in connection with teaching and leisure activities in schools, SFOs and clubs.

Lynetten construction on pending
Effluent pipeline work on the large Copenhagen water treatment plant for Lynetten has been rescheduled to October according to the City of Copenhagen. Accordingly, the scheduled discharge of wastewater will be delayed as well. The utilities company in charge, HOFOR, has already indicated to the Technology and Environment Committee that it is possible to postpone the project.