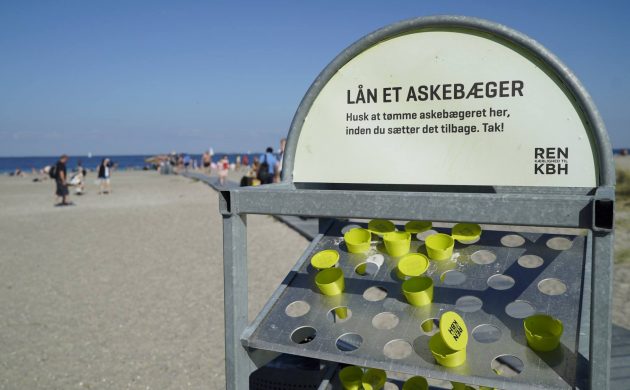 Copenhagen has launched a new campaign that promotes the disposal of cigarette butts in bins, instead of on the sidewalks, beaches and parks of the city.

As part of its ‘Ren Kærlighed til KBH 2020’ campaign, the city has made reusable and odourless pocket ashtrays available to the public in 300 cafes across the capital (see image below).

Ninna Hedeager Olsen, the deputy mayor for technical and environmental issues, pointed out that butts contain microplastic and toxins and are thus detrimental to nature.

“Butts are a challenge to the municipality’s economy because the resources used on picking them up are far better spent on other cleaning tasks and maintaining the green areas of the city,” said Olsen.

READ ALSO: Smoking in arrears: Some problems can’t be stubbed out: but it doesn’t stop them trying

No ifs or butts about it
Another aspect of the campaign is new beach ashtrays being made available at Amager Strandpark and Svanemølle Strand beaches to prevent people from leaving their butts in the sand.

Other parts include raising awareness via posters around the city, advertisement on buses and social media campaigns focusing on butts needing to go in bins.

Cigarette butt waste is far from a small problem in Copenhagen. In fact, it accounts for 87 percent of rubbish cleaned up in the city – and it costs the municipality two kroner per butt.

The city isn’t the only entity raising awareness about the problem. CPH POST recently interviewed two activists working to rid Copenhagen, and other cities like it, of its cigarette butts.