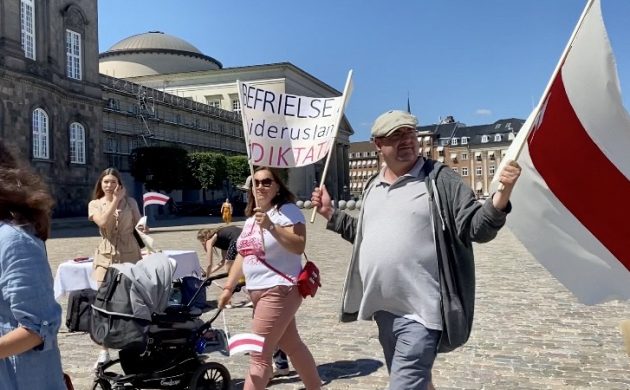 On June 24, emigrants from Belarus gathered in front of the Danish Parliament in protest against the arrests of politicians, activists and journalists in their home country in the build-up to the upcoming presidential elections.

As the current president and ‘Belarusian strongman’, Aleksandr Lukashenko, hopes to prolong his presidential reign, Belarusians both local and abroad are sharing their concerns in historic numbers.

Copenhagen’s protest was part of a worldwide initiative that has already taken place in Germany, Poland, the US, the UK, the UAE, and many other countries.

The brochure that is passed out to curious locals by the activists makes the intention clear: “We ask the European Union and the government of Denmark to pay attention to the country’s situation and assist Belarusian civil society in their aspirations for fundamental freedoms and human rights.”

Battle-hardened protesters
Among the protesters was Irina. Before moving to Denmark to live with her husband, she worked as a professor of economics at the Belarusian State University. Irina claims the arrests we are currently witnessing in her country of origin are exemplary punishments for disobedience.

In 2004 she experienced a severe method of penal custody herself, as she and thousands of others fearlessly walked the streets of Minsk after a constitutional referendum allowed Lukashenko to seek unlimited terms in office.

“I will never forget how the riot police brutally detained me during that demonstration. By the decisions of the KGB, I was given three days in the Okrestina prison for participation in the rally. We weren’t given beds to sleep on, so I had to learn to sleep standing against the wall. It was creepy,” she told CPH POST.

“In a police state, intimidation has always been successful at keeping people silent. However, in 2020 the desire for change in Belarus is reaching a critical mass that trumps the fear. Never have we seen so many local and expat Belarusians publicly declare their right for free elections as we see in these days.” 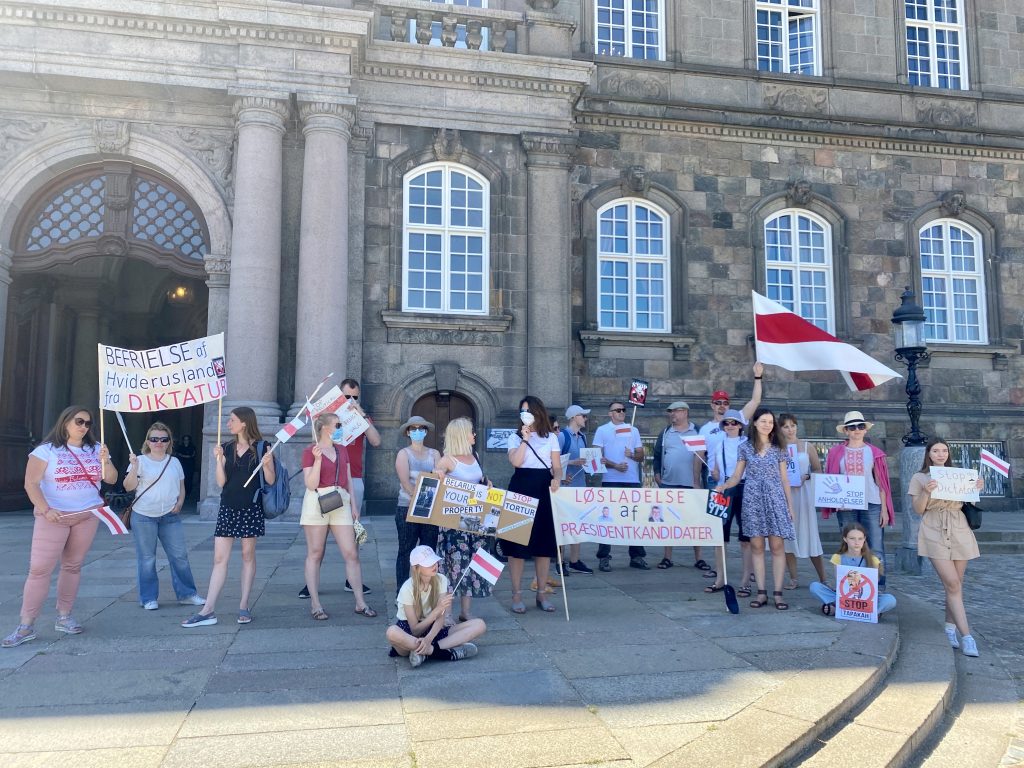 Change on the horizon
Political scientists agree that the inadequate response to the coronavirus and its subsequent consequences has undermined Lukashenko’s ratings – even among previously loyal state employees. The Ministry of Health has registered 61,475 cases of COVID-19 in Belarus, with 400 people being tested positive every day.

Moreover, the economy, which was already shaken by the oil conflict with Russia in December 2019, sank even further. Forecasts from the World Bank predict the Belarusian economy will shrink by 4 percent in 2020, representing the most significant annual decline for the last 25 years.

Elimination of competitors
For the first time since 1994, more than one presidential candidate has collected the needed 100,000 signatures for participation in the election race.

The leading opponent of Lukashenko is Viktor Babariko, a tycoon of the banking industry who was until recently the chair of Belgazprombank. According to an official statement from Babariko’s campaign headquarters, he has reached 434,985 signatures – a record for an alternative candidate in independent Belarus. However, Babariko is currently being detained on suspicion of financial crimes, along with his son, ex-colleagues, and friends. Babariko continues his campaign from prison. 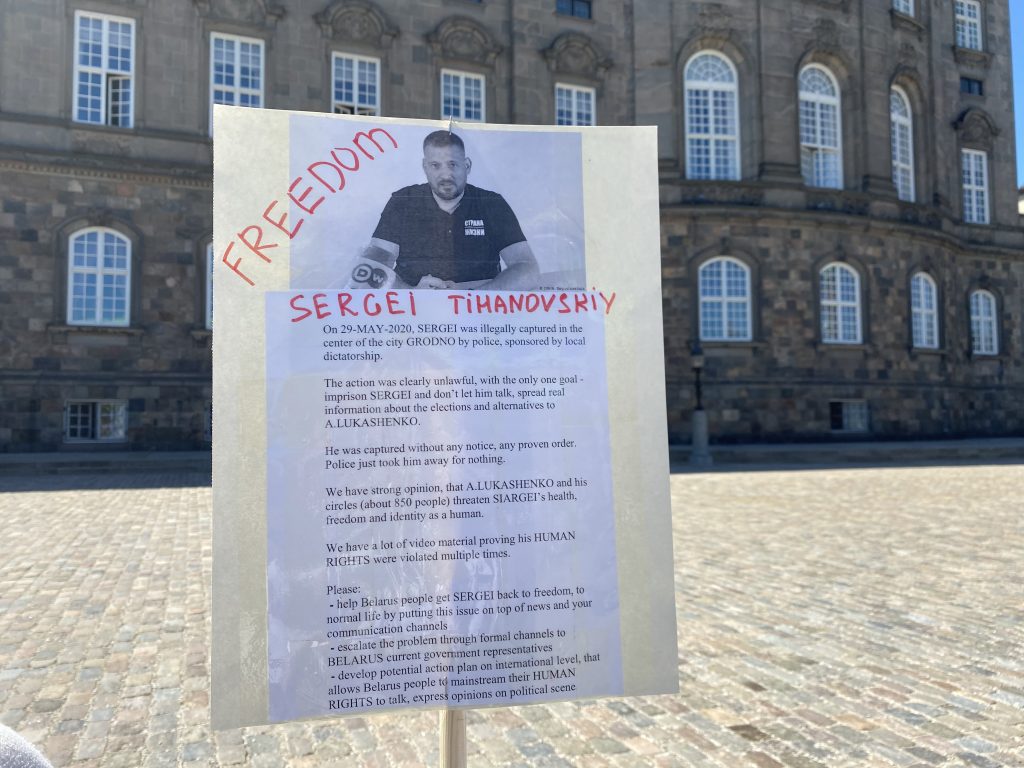 In addition to Babariko, the now-famous blogger and previously banned presidential candidate Sergei Tikhanovski has also been detained. To circumvent the detention, Tikhanovsky’s wife, Svetlana, continues to lead his campaign for him. She bravely submitted the documents to register herself as a candidate, despite anonymous threats that her children would be kidnapped.

The third name that comes up as a serious competitor to Lukashenko is Valery Tsepkalo, a former diplomat who is the head of the High-tech Park in Minsk. Like many others, he has filed the documents to register himself as a presidential candidate. Still, talking to the press, Tsepkalo says that he does not exclude the possibility that he may soon go to jail himself.

Lars Aslan Rasmussen, a member of Socialdemokratiet, the leading party in Denmark, heard the rally from his office. He came out to meet the protesters, talked to the organisers, and shared personal contacts for further communication. 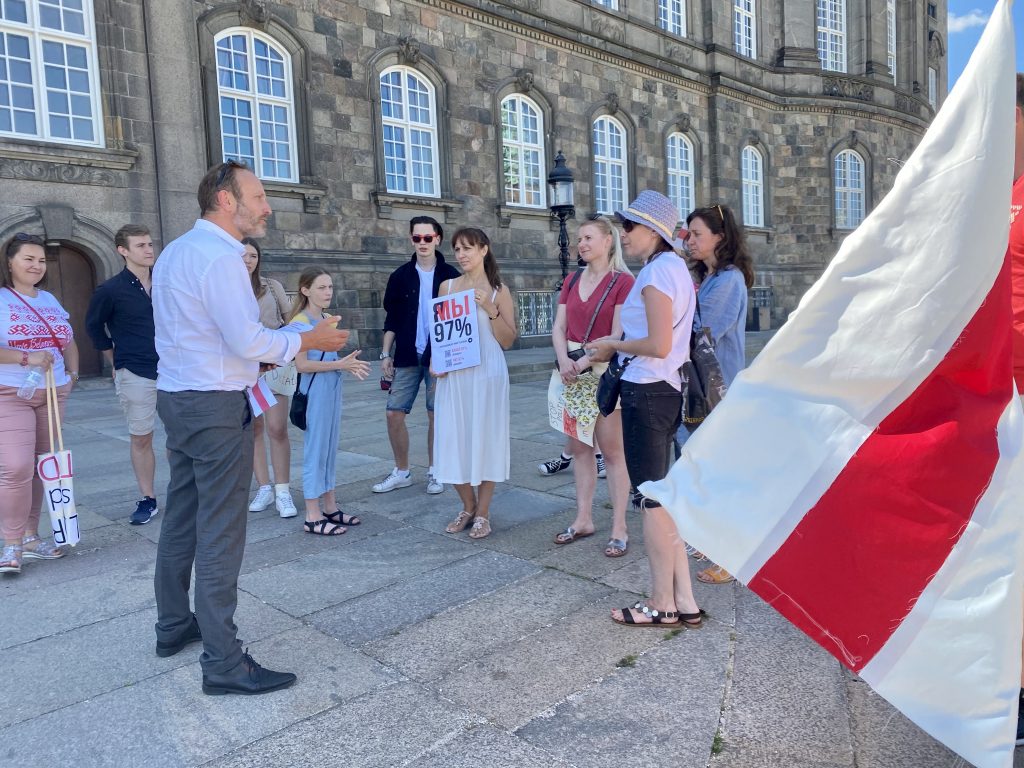 The former foreign minister, Radikale MP Martin Lidegaard, also spoke to the protesters. Lidegaard emphasised that he had been following the situation in Belarus for a long time and was concerned.

Later the same day, Lidegaard shared a photo of himself with the protesters on Instagram and added: “Respect for these young Belarusians who today protested for democracy in their country. Unfortunately, a long way to go …”

Lukashenko has been in power for 26 years and hopes that the coming August 9 elections will mark his sixth victory in a row. 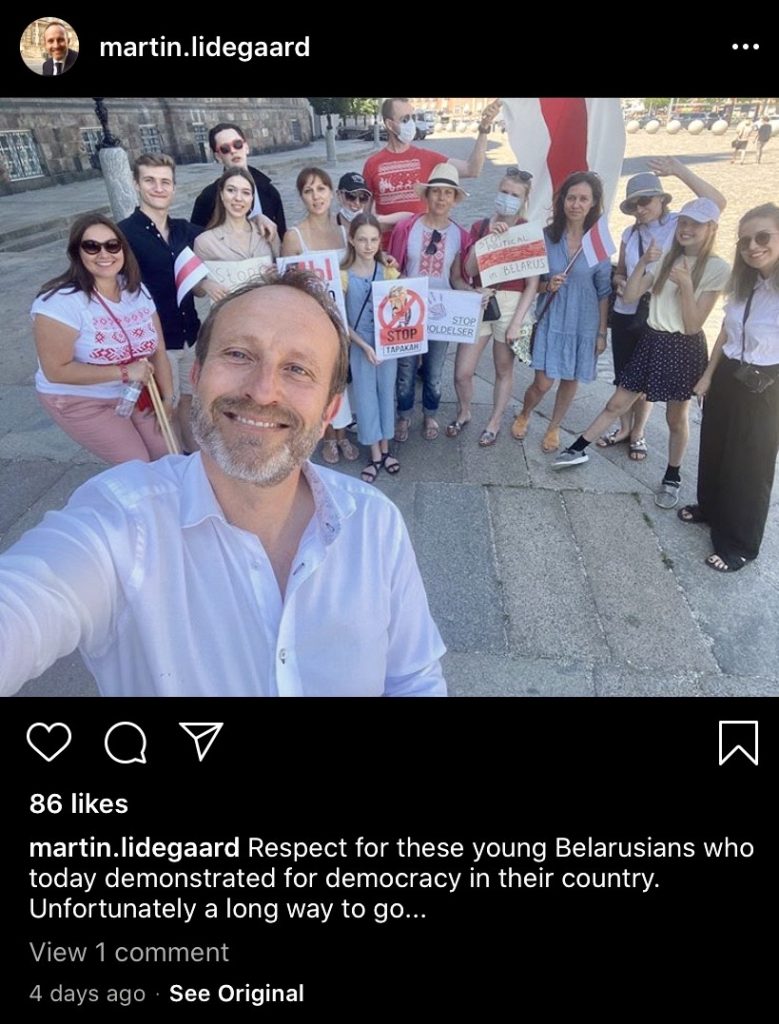