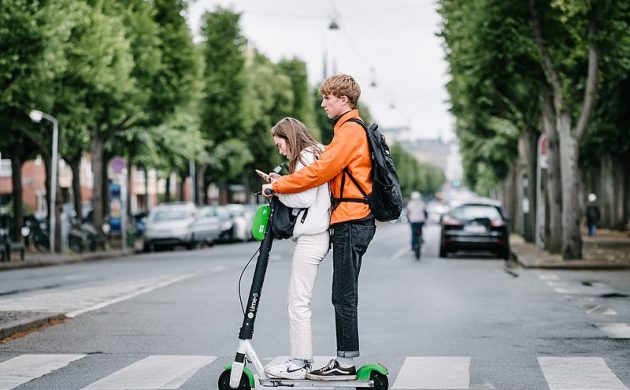 One of many brands of scooter in action on the streets of Copenhagen (photo: Kristoffer Trolle)
September 9th, 2020 3:56 pm| by Luke Roberts

Expected to come into force early next year, a new law spearheaded by one of Copenhagen’s mayors intends to rid Copenhagen’s streets of the clutter and disarray caused by abandoned electric scooters.

The technical and environmental mayor, Nina Hedeager Olsen, is hoping to shift the burden of maintaining Copenhagen’s streets onto the scooter companies themselves, but denies that she hopes to remove them from the streets entirely.

“Unregulated chaos”
Since January 2019 it has been legal to ride electric scooters on Denmark’s cycle lanes, and since that time the Copenhagen market has been flooded with rental companies, even though heavy limits on the number of available scooters in the city were imposed this year.

This popularity, however, has led to significant discontent among many other users of Copenhagen’s pavements and cycle path. With the scooters often simply left abandoned – upright or not – Olsen has described the situation as one of “unregulated chaos”.

Unlike similarly structured bike rental companies, the scooters do not have designated pick-up and drop-off locations, but are instead simply left around the city for other users to then pick up.

Such unrestricted abandonment is dangerous for cyclists and the visually impaired alike, according to Olsen, as well as making the city look unkempt and untidy.

Rental locations
In order to clean up the city, the proposal wishes to place limits on where the scooters can be rented from and charge the companies themselves for the removal of misplaced vehicles.

The mayor claims it is not intended to rid the streets of scooters entirely, but to simply introduce some much needed regulation to the sector and take steps in “the right direction”.

The proposal has faced opposition from Radikale, with Mette Annelie Rasmussen writing to DR to express her belief that, in the name of a greener Copenhagen, this is a problem that the rental industry itself should find a solution to.

For her part, Olsen is sceptical as to the environmental impact of electric scooters. She believes that they are used primarily by pedestrians and cyclists, and therefore they do very little to take cars off Copenhagen’s roads.