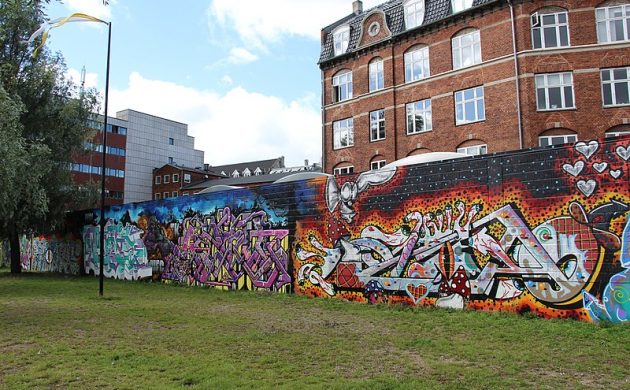 Street art in Nørrebroparken, one of the areas where the ban has been extended (photo: Fred Romero)
September 10th, 2020 3:53 pm| by Luke Roberts

As of 18:00 this evening, large areas of Nørrebro will be unavailable to those wishing to gather and meet others due to a recent rise in coronavirus cases in the Copenhagen district.

For example, Nørrebro Skatepark and Nørrebroparken will be shut off by police who have reported previous trouble in enforcing social distancing rules.

2,500 kroner fines
The ban applies between 18:00 and 06:00 from Thursday evening until Sunday morning, except for the section of Skatepark that lies in front of Café Friheden where the ban will come into place at midnight.

Breaking the rules in these areas will leave people liable to a 2,500 kroner fine, though ordinary activities such as walking or running through the areas are not prohibited.

Copenhagen mayor to step down
Ninna Hedeager Olsen, the mayor of technology and the environment in Copenhagen, has announced that she will not run for re-election in 2021. Elected in 2017, she claims (in an interview with Solidarity) that she had never intended to run again. Instead, she claims she went into politics “to be an activist” and looks forward to now taking that activism onto the streets. In her time as mayor she battled for environmental issues by raising the price of private parking, fighting construction in Sydhavn and battling to protect Amager Fælled, the city’s largest public common.

Test capacity boosted
The number of tests per day currently stands at 40,000, but with new moves to increase this number, it is hoped the figure will stand at 50,000 in a couple of weeks time. In order to achieve this, several pop centres will be set up around Copenhagen over the weekend and the facility at the airport will be doubled from Monday. The increase follows criticism of the delay people faced in waiting to hear about their test results.

Popular ride closes after half a century
After 48 years, 18 million guests, and a distance of 2.5 million km travelled, Bakken has announced it will close its popular ride ‘Racing’. The head of the park, Nils-Erik Winther, claims that, at its old age, it was simply time for it to be retired. On September 13 visitors can go for one final spin.

Ørestad guide launched
The developing city area of Ørestad in the Copenhagen district of Amager has had a new guide published to keep visitors posted on the numerous events in the area. The guide wishes to dispel the myth that Ørestad is a sleepy, quiet part of the city. It can be picked up free around Copenhagen, or downloaded from the By & Havn website.

Drivers at great risk, but not tested
Despite being among those most at risk of catching coronavirus, bus and taxi drivers are not being systematically tested for infection. Neither industry organisations for taxis or buses have indicated this is likely to change, but claim instead they are adhering to guidelines and recommendations.

Big changes on the way for Frederiksberg
Frederiksberg’s municipal council has voted in favour of a new budget with a focus on daycare provision, improving schools, pedestrianisation, and the promotion of sustainable initiatives. It was only passed with a slim majority, as it faced opposition due to its two-year timeline at a time when the global pandemic makes future outlooks rather unpredictable.