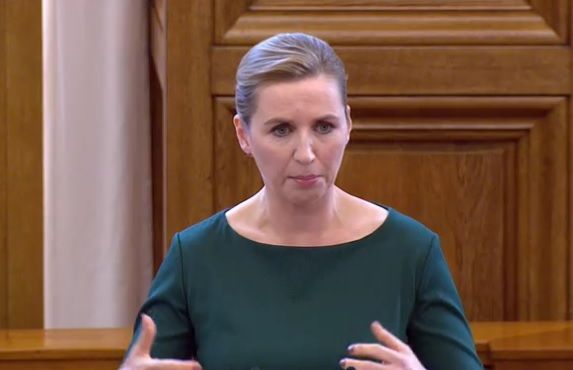 The first Tuesday in October. That’s when Denmark’s Parliament opens for business every year. It is thus stipulated in the Danish constitution.

Today was no exception, although the ongoing Coronavirus Crisis did make it a bit different this year.

COVID-19 weighed heavy as Mette Frederiksen launched into a speech  encouraging everyone to continue to be vigilant.

“There are many indicators that point to Denmark, as the situation is now, having control over the epidemic. But the health authorities evaluate that the figures are still too high as winter approaches,” Frederiksen said.

With Queen Margrethe and Crown Prince Frederik looking on, as tradition dictates, the PM revealed that the government would unveil a new coronavirus warning system that will provide more transparency about what actions will be taken should a spike occur.

Times of corona
She also thanked the health workers in Denmark and everyone else working to keep the country going through the crisis.

“We have proven that we can protect individual lives and still be one of the economies to best get through the crisis,” the PM said.

The government will shortly be proposing far-reaching aid packages and leading a very expansive financial policy in 2021 and beyond.

However, she also said that many companies in Denmark will have to accept that running a business will be very different in the future.

Frederiksen also underlined that policies to tackle climate change was to be prioritised – an indicator of which was the recent sustainable agreement with India.

Thousands of jobs have been lost during the crisis and the PM said that an additional 5,000 study placements in further education will be available.

Among other things, it will help young people who have been forced to drop their sabbatical year due to the crisis to begin their further education.

Past immigration policy a failure
Frederiksen also had a stern word for the descendants of non-western immigrants, who are over-represented in the crime statistics.

The government will thus look at cracking down harder on criminal actions – including more hefty fines for breaching visitation laws, evicting people for breaking the law in certain areas, and confiscating personal effects from people who have committed crime and owe money to the state.

“The first time, the fine will be 10,000 kroner. And if you are in debt, the police will be able to confiscate jackets, watches and gold necklaces. The second time, it’s 30 days in prison,” Frederiksen said.

Denmark’s handling of immigrants in the past has been a failure, she said.

Furthermore, people with convictions for violence at nightspots will be handed a two-year curfew preventing them from visiting them.

– From an international perspective, Frederiksen mentioned Russia’s increasing aggressive approach to the EU and called for increased co-operation between Europe and the US.

– The Arctic is also an area of immense importance, which Denmark will continue to focus on.

– In terms of immigration, the government will continue to work towards moving the asylum application process abroad.

– A new digitalisation strategy was also something the government is going to focus on, in a bid to maintain the country’s high global ranking.

– The government will pinpoint four areas where Denmark wants to excel in the future in regards to sustainability – including collecting and storing CO2 and tackling plastic in nature.

– The government will propose that 2 billion kroner a year will be set aside for green initiatives until 2025.

– Seven municipalities, Helsingør, Rebild, Viborg, Middelfart, Holbæk, Langeland and Esbjerg, have been given total freedom in terms of legislation in the public school, daycare and elderly sector.