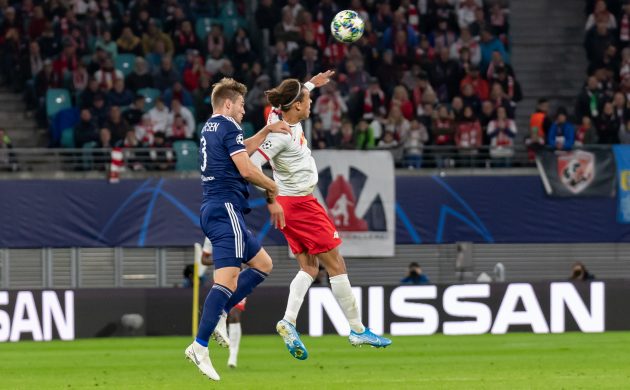 Joachim Andersen battling against a fellow Dane, Yussuf Poulsen, during one of his few run-outs in a Lyon shirt (photo: Steffen Prößdorf)
October 6th, 2020 4:12 pm| by Luke Roberts

On a busy deadline day, the cash was splashed as teams across Europe looked to strengthen their squads for the remainder of the season, with Denmark’s most expensive export getting caught up in the rush.

Out of favour
Joachim Andersen – who broke Danish records when he signed for Lyon from Sampdoria in 2019 with a 225 million kroner price tag – has left on loan for English side Fulham on a one-year deal.

The 24-year-old defender cited incompatibility with the Lyon manager as a key driver in his departure, with Andersen not featuring in the plans of new coach Rudi Garcia.

The only way is up
If he was looking for action, he has certainly gone to the right place. Fulham currently sit bottom of the Premier League, having lost all four opening games, shipping eleven goals in the process.

They’ll be hoping their new signing can hold back the tide.

Two other big moves
Meanwhile, in the Superliga, it didn’t take long for Kjartan Finnbogason to find a new club after being released by Vejle. The striker is returning to AC Horsens after leaving the club in 2018.

Elsewhere, Danish centre-back Mathias ‘Zanka’ Jørgensen has returned to the country on loan to Copenhagen from Fenerbahçe.

Harder wins European award again
For the second time in her career, Danish international Pernille Harder was on Thursday named Europe’s best footballer by UEFA. She joined Chelsea from Wolfsburg this season, breaking the women’s transfer record. She won the same award in 2018.

Løchte and partner Pütz dumped out of French Open
Together with Tim Pütz, his doubles partner, Frederik Løchte Nielsen was yesterday knocked out of the French Open by Colombian first-seeds Robert Farah and Juan Sebastián Cabal. The pair threw two match points, losing 6-7, 6-4, 7-6 in the quarter-finals.

Two third-place finishes for Danes in Giro d’Italia
After Mikkel Bjerg finished third in Saturday’s opening stage of the Giro d’Italia, Mikkel Honoré followed up with a third place in the second stage on Sunday.

Danes pipped at the post in BinckBank Tour
Despite leading overall going into the final stage of the BinckBank Tour on Saturday, Mads Pedersen tumbled down the rankings to finish fifth overall. The title was snatched by Mathieu Van der Poel in a phenomenal final ride, whilst Søren Kragh Andersen also leap-frogged his compatriot to take second place in the tour.

Astralis claim victory in eSports final
Danish eSports team Astralis defeated Ukrainian-Russian outfit Navi on Sunday night to win the ESL Pro League. The team won 3-2 overall in the Counter-Strike tournament, coming back from a 1-0 handicap to take the win.