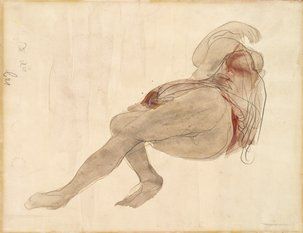 The jury’s out on why this is called ‘Nøgen meteor’ (naked meteor) A prelude to a kiss perhaps (photo: Pernille Klemp)
September 24th, 2016 3:00 pm| by Stephen Gadd

To most people, the French artist Auguste Rodin is synonymous with sculpture – just think of ‘The Burghers of Calais’ or ‘The Kiss’. However, Rodin was also a prolific draughtsman and created more than 10,000 works on paper. A new exhibition at SMK presents a good selection of them, mainly loaned from the Rodin Museum in Paris.

Rodin himself said that “drawings are the key to my work. Sculpture is nothing other than drawing in all dimensions.” So we cannot simply view these as studies for his sculptures; they are often extremely spontaneous works in their own right, as throughout his life, Rodin strove to capture the very essence of the life-force.

Most of the works on display are ‘works on paper’ rather than pure drawings, as they are usually overlaid with coloured washes. Often, there is an astonishing level of fluency to the underlying pencil work, capturing the essence of the motif with great economy of line.

To Hell and back
The exhibition is divided into five themes. In ‘Black Drawings’, we see Rodin attempting to get to grips with the themes contained in Dante’s ‘Divine Comedy’ – in particular, Dante’s ideas on Hell in ‘Inferno’.

Rodin had been commissioned to produce a door for the new museum of art and design in Paris (sadly, not completed in his lifetime) and had the Gates of Hell in mind for it. Most of the drawings here are dark and densely-textured. They are not necessarily related to actual events in Dante’s work, but rather to the themes therein. An example of a very early collage shows just how innovative Rodin was.

Movement and dance
Unlike his contemporaries, Rodin preferred his models to move freely in the studio when he was working with them. He was very interested in movement and the idea of ecstasy – literally, standing outside oneself. When a troupe of dancers from Cambodia visited France in 1909, Rodin was fascinated by their muscular bodies and intensity and in a concentrated period, made a large number of drawings of them. His intention was to capture their power and let it flow through them, directly down onto the paper.

In the series of works in ‘The Woman as a Vase’ section, Rodin sees a correlation between classical vases (which he’d begun to collect) and the female form. Here, he explores the idea that the human body, and nature itself, is based on a number of fundamental forms that serve as building blocks in art and design.

On the face of it, this exhibition might appear to be mainly for art buffs; there are no ‘blockbuster’ pieces as such. However, anyone interested in Rodin’s work and graphic art in general should see it. It is attractively and thoughtfully laid out, with the gallery space playing to the works to excellent effect. If you have the patience, there is a great deal to be gained by immersing yourself in Rodin’s world.