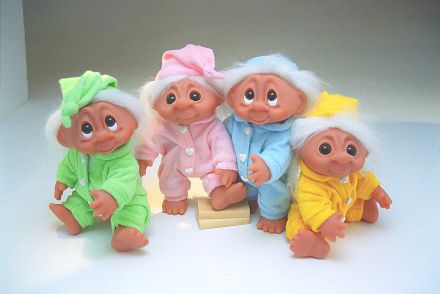 In the troll version of Oliver!, Bill Sykes has just told the forlorn-looking fellas to “start a library”
October 13th, 2016 7:00 pm| by Ben Hamilton

Children’s toys had been called “damn things” before. In the heat of the night, drunk fathers, tip-toeing burglars and even Father Christmas have all been there: when their soft-footed approach is rewarded with excruciating pain courtesy of an unseen, pointy foe.

So in 1962, when a toymaker in the north Jutland town of Gjøl decided to call his company Dam Things, you would have been forgiven for jumping to conclusions, particularly as the product in question was a troll doll that was also damn ugly.

Fairy-tale founder
But no, this woodcutter – as apt a profession as any to prosper in the world of make-believe – was simply foregoing the Lego route in favour of the one trodden by the likes of Maersk and Haldor Topsøe. Thomas Dam named his company after himself, and nearly 60 years later, his name is finally on the verge of getting the recognition it deserves.

Few will dispute that Dam’s plastic troll dolls are well-known, but due to a balls-up with the original copyright, a US court in 1965 was able to rule that the design was in the public domain, which meant there were countless imitation products – a copyright dilemma that wasn’t rectified until this century.

Since then, a 2013 marketing deal with film production giant DreamWorks, which will kick off in earnest this autumn following the release of an animated film using the voices of the likes of Justin Timberlake and Zooey Deschanel (see page 18), has placed the Danish company Dam Things in a position in which it simply cannot fail.

Good luck JFK, dammit
It’s a far cry from the disappointment its founder felt when his American dream evaporated. He took it as a sign that he should leave business to others, and despite the trolls megatrending in the 1960s and early 90s, he never realised the riches that the creator of a famous global brand would expect to, dying in 1989.

Given his experience, he probably would have enjoyed the double irony that many Americans kept the troll as their good-luck charm, and that one of them, Betty Miller, the first female pilot to fly across the Pacific, presented hers, Dammit, to JFK at the Whitehouse … in 1963.

Toy of the year twice
Such was the popularity of the troll that the US Toy Association named the Dam version its Toy of the Year in 1963 and 1991. But despite the recognition, it continued to struggle against the neverending companies queuing up to manufacture a similar product.

It was only in 2003 that Dam Things claimed back the US copyright thanks to a Congressional law. However, an unsuccessful licensing deal with DiC Entertainment did little for the brand despite a TV series called ‘Trollz’.

Boom on the way
But what a difference a letter makes. Green-lighted by a movie rights deal with Dam in 2011, the new DreamWorks movie ‘Trolls’ is being released in the US on November 4 – timed for the US autumn holidays in the same way its debut in Denmark on October 13 is lined up for children’s half-term. The Dam Things products are expected to megatrend again, but this time with no imitation rivals.

While DreamWorks has picked up the global merchandising rights, they don’t include Scandinavia – a tribute to the founder’s resolve to stick to what he knew.

Despite the frenetic sales overseas, his company continued to steadily produce the trolls for a home market that never tired of them. Today, Thomas’s son Niels is the new owner, and he can start looking forward to a busy festive period.

While Santa might tread on a few on his delivery round, he’ll deliver a whole lot more.

– Thomas Dan made his first ever doll out of carved timber as a birthday present for his daughter in the 1950s, using Icelandic sheep’s wool for the hair. He based the troll’s image on himself.

– Subsequently, as production eventually switched to a factory, the dolls were made out of latex, and then PVC.

– The hair continued to be made out of wool, featuring every colour of the rainbow and more, and the eyes were made of glass.

– The ‘Good Luck Trolls’ were meant to be kindly and humorous, albeit ugly – a long way removed from the mythical creatures that frightened generations of children … and adults.

– One of the first major orders for the doll came from the department store Illum, and the Dam dolls were marketed as Wish-niks in the US.

– Fake imitations such as Fauni Trolls and Lucky Snooks soon followed in the US, and towards the end of the 1960s, the merchandise spread beyond dolls to all manner of product.

– During the second fad in the 1990s, the trolls merged with already established figurines, including the Teenage Mutant Ninja Turtle trolls and Barbie. While another firm dreaded the trolls’ hair to make them appeal to boys.