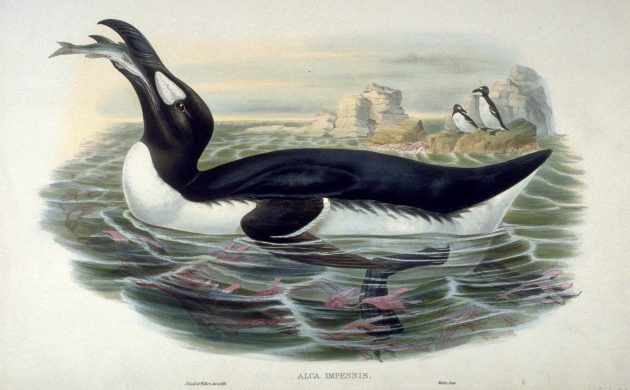 There are only 78 great auk specimens in the world today. However, all of them are stuffed. The only preserved specimens of the extinct Icelandic birds’ eyes and internal organs can be found at Copenhagen’s Zoological Museum.

The museum is also the proud owner of an egg along with some skeletal material. But only experts are allowed access to the near sacrosanct relics of the great auk (‘Pinguinus impennis’ in Latin, ‘garefowl’ in Iceland).

As they didn’t know how to fly and were incapable of defending themselves, great auks nesting in colonies on the rocky coasts of the Faeroe Islands, Greenland, Iceland, Newfoundland, the British Isles and Scandinavia were mercilessly slaughtered by hunters for their soft feathers and tasty flesh, skins and eggs.

The final known living pair, along with one egg, were taken on Eldey Island, Iceland in 1844 – the last to be caught before becoming extinct shortly afterwards.

Ole worms his way in
The great auk features in 17th century Danish scientist Ole Worm’s Museum Wormianum of 1655, a tome full of engraved illustrations depicting specimens from his ‘Cabinet of Curiosities’, the first natural history museum in Denmark that he set up in his own home in 1623. In the book there is a splendid print of a great auk, which was the scientist’s pet, the only known record of the sea bird’s existence in captivity.

Worm trained his auk to walk using a ribbon lead attached to a collar fixed round the bird’s neck. The collar looked like a pale band encircling the auk’s throat, and in subsequent portrayals of the bird a neckband was mistakenly featured, as though it was plumage or a distinctive marking of the species.

One of the last major catastrophes that assaulted the great auk in Iceland was the Napoleonic Wars. Britain and Denmark were at war in 1813 and the British blockade had cut off supplies from Iceland to Denmark. Under the orders of the governor of the Faroe Islands, a gunboat was dispatched to Iceland to cull supplies of the bird.

Gone by 1844
Copenhagen’s Zoological Museum – situated on the university campus at 15 Universitetsparken – boasts a collection of around 150,000 different species of animal from all over the planet.

The first section concentrates on animal life in Denmark and Greenland. Next is a pole-to-pole section of animal life from the Arctic North Pole to the southernmost regions of Antarctica.

Finally the Animal Life of the Oceans section concerns some of the largest animals our planet knows, including the skeletons of two massive male sperm whales and a giant squid suspended from the ceiling. The huge whale skeletons are from Iceland and Greenland, caught in 1903 and 1859 respectively, up to 15 metres long and weighing around 2,000 kilos.

As well as the preserved great auk innards (a mystery surrounds what happened to the skins, but it is believed they were sold to other museums), the museum is also unable to show its other prize item: a skull of the legendary dodo (Didus ineptus), a flightless bird of the pigeon family with a hooked bill, which died out on the Indian Ocean island of Mauritius in the late 17th century.