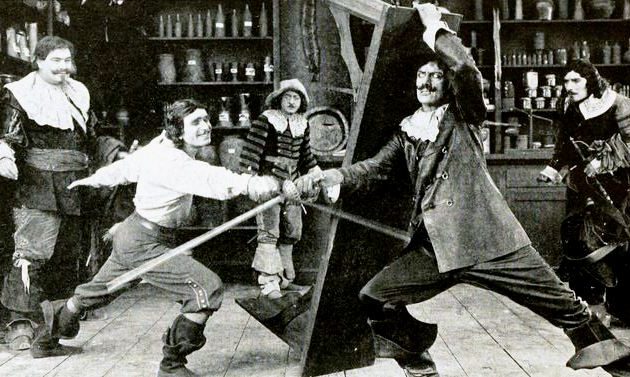 Can the three musketeers trust one another, though? (photo: United Artists)
April 27th, 2018 4:18 pm| by Ejvind Sandal

For more than a century the parties comprising the labour market have pretty much managed to deal with the remunerations and obligations of the workforce without the heavy hand of legislators.

Not entirely though; from time to time the government together with a parliamentary majority has legislated an end to a conflict when it was judged that society was suffering too much from strikes and lockouts paralysing the country.

The last time this type of legislation was used was a few years back, when the teachers’ union was locked out over a dispute over working hours. They are at it again today, wanting a deal rather than a law to govern their affairs.

D’Artagnan rides again
The negotiating unions are bound together by the ‘Three Musketeers’ oath’ – “one for all, all for one” – saying they want a satisfactory solution for all of them, or none. The state, regions and municipalities are also bound together in their intention to lock out several hundred thousand employees.

By law we have a moderator, a very experienced woman who has it in her power to postpone the implementation of scheduled strikes and lockouts for two 14-day periods in order that the parties might reach an agreement. At present, we are in the second of these periods.

In the private sector, conflicts tend to centre around who has the largest piggy bank to support those not getting paid and the employers seeing their production facilities rendered idle. Also here, the state can intervene and has done so at times.

In the public sector, however, the workforce is doubly under pressure: they are locked out without pay and they do not get the public services they need. This means no schools, no hospitals (apart from emergencies), no train transport and no state church services.

Beware of angry voters
It should, however, worry the lawmakers. Half the workforce is publicly employed and if they get angry nobody can tell how they will vote. Such situations create protest movements, which traditional politicians hate.

The private sector is also hurt, but they cannot do anything about it but appeal to the government, which is losing private sector revenue. Some party leaders are airing support for the employees, although they should keep their mouths shut if they support the ‘Danish Model’.

When the Danish Model is applied to civil servants it is clear that it has really outlived its use. Historically, civil servants have been employed for life, could not strike and were remunerated according to the sovereign king – or later by the will of a parliamentary majority. That worked fine when the public sector was a small part of the workforce.

Unions against public employers is simply an uneven fight, even if the outcome is successful. The answer is to privatise more of the public sector. Then the Danish Model can thrive again.