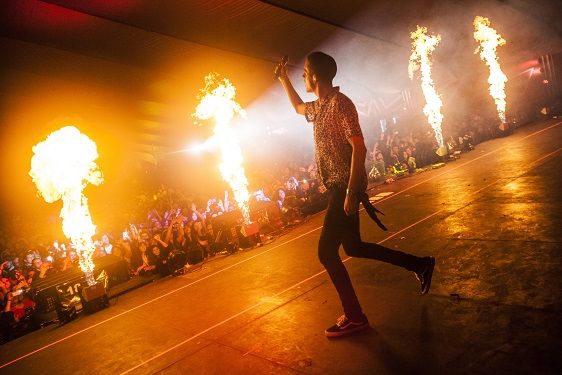 G-Eazy is a true-to-life rock star who just happens to make hip-hop music.

He is the definition of young and reckless and his honesty about his lifestyle bleeds into his lyrics and his live shows.

Fresh off his arrest in Stockholm for throwing punches at a security guard and cocaine possession, G-Eazy was out for redemption at his performance in Christiania, another episode of his Beautiful and Damned tour.

Acting up
The show was divided into three acts and it had the feel of a mid-sized production – the smoke effects were rather cool, but some of the visuals left something to be desired. For example, the images were either kind of boring or promoting heavy drug use.

G-Eazy – introducing himself by his given name of Gerald – was, as the song goes, out to lead the audience on a legendary night.

Speak to the people
Many of the highlights of the show took place when he spoke in between songs.

For example, he spoke about the power of music to bring people together, showing modesty about how he’s nothing without his fans.

Later he displayed remorse for his actions in Stockholm before his delivery of the chilling and introspective ‘Sober’.

Love is in the air
G-Eazy brought out girlfriend Halsey for a ‘couple’s moment’ – and she urged the audience to express how much they love G-Eazy – maybe this was exactly what he needed after the week he had endured.

The plea came after they performed the hit ‘Him & I’, which has 200 million-plus views on YouTube.

For the fans
G-Eazy brought the energy and saved the biggest hits – such as ‘Me Myself & I’ –for his epilogue.

All in all, G-Eazy uses music as his outlet and no fan in attendance can say they were cheated of a rousing rendition of the hits that got him to where he is today.

And it looks like the man has maintained a measure of humility.