 Performance Review: Lovely Rita, a star is made - The Post 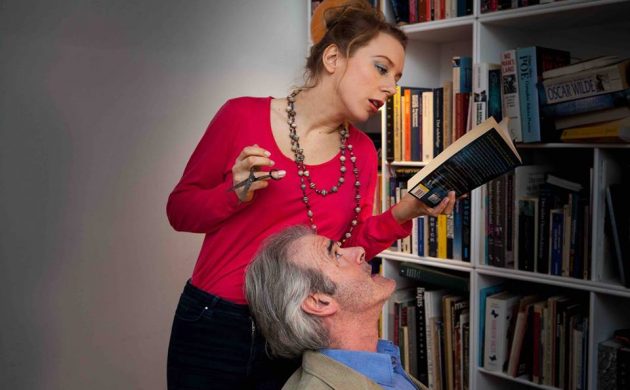 To echo the main character in ‘Educating Rita’, the 1983 film that national treasure Wily Russell adapted from his own 1980 play is “crap”. In fact, it’s even “crapper than crap” ‘Howard’s End’. (Worse even than ‘Howard’s Way’.)

‘70s play vs ‘80s film
Of course, I didn’t notice that when I watched it as a teenager in the late 1980s, as we were surrounded by crap back then. From David Hentschel’s tinny soundtrack to the university setting’s lavish lawns, it had Oscar bait written all over it – like it was hitching a lift on the skirts of ‘Chariots of Fire’.

Julie Walters is amazing in it, but having seen That Theatre’s production at Krudttønden theatre, I question how much better the film could have been had its script not been so influenced by the producers’ grasping fingers and the mood of that era.

By reflecting the fast-changing Britain of Margaret Thatcher, the adaptation favoured the melodrama of the earlier play over its grittier elements. Three years might not sound like a long period of time, but it was enough for a whole country to change forever.

Given that a decade always needs a few years to warm up, it’s fair to say that That Theatre’s ‘Educating Rita’ is set in the 1970s and all the better for it.

Dawn of a new age

There was a reason why this newspaper interviewed recent theatre graduate/busy actress Dawn Wall in early September: she’s going to be a star! And this was head and shoulders the best performance given by an actress in a That Theatre production over the last decade.

From the very first scene, she made the fourth wall’s first floor windows come alive through her curious gaze, which as the play evolved became ever more confident and knowledgeable.

It underpinned a tour-de-force of comic timing, thoughtful inflection and impressive intuition. I later discovered she had added compelling lines from the film not in the original play – dedication indeed.

There was something realistic and human about her Pygmalion-like transformation into an English-language graduate that Eliza Doolittle’s journey from flowerseller to duchess never quite encapsulates.

There’s nothing, after all, too fantastical about Rita’s arc. It’s a story we can all relate to as citizens of a more equitable world.

The Caine mutiny
Her professor Frank is a less likeable character, and perhaps Michael Caine’s mistake was trying to elicit too much sympathy, with the help of the crap soundtrack, from the viewer.

Ian Burns, in contrast, chooses an approach that renders a more enigmatic character with more layers to unpeel.

When he flirts with Rita, he’s creepy. When he’s drunk, he’s rude and selfish. When he’s talking about his own work, he’s not convincingly modest.

Burns does a far better job at underlining the emptiness of Frank’s character and his era. This world of fewer barriers belongs to Rita, but Frank would have her leave it to follow him to Australia.

In the film version, it’s seen as romantic. Here, it’s desperate and selfish.

Still relevant today
As you would expect from That Theatre at the intimate Krudttønden, the production values – from the well-conceived set to the fun musical extracts linking each scene – are of the highest order.

With assured direction from the always dependable Barry McKenna, whose first play in Copenhagen was a CTC production of this very play in 1992, nothing is left to chance.

This two hour plus staging demands a lot from its two actors – really, it’s a wonder they don’t collapse on the study’s couches at times, given their workload.

But the overall result is worth the effort. Intriguing, realistic, grittier, it’s a play that continues to be relevant – unlike a film that wouldn’t feel out of place if it was screened on the Hallmark Channel.