 Commendably flying the torch for Alvin Ailey - The Post 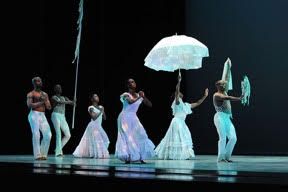 Back by popular demand is Alvin Ailey American Dance Theater. They are performing at the charming Tivoli Concert Hall with shows running until September 10.

A deserved ovation
Alvin Ailey has been performing and touring the world for nearly 60 years, creating culturally inclusive communities through dance. Ailey was an iconic inspiration and his successors have carried the torch throughout the years.

An outstanding ovation from the audience proved current artistic director Robert Battle has set the stage yet again. The dancers delivered and the stage came alive.

There was a soulful swaying of hips and shoulders throughout the music changes, which echoed jazzy African-American tunes.

Let the symbols clash!
There was an exquisite rawness to ‘No Longer Silent’ that was emphasised by jarring exorcist positions and conforming formations. Symbols chimed profusely while outstretched arms and splayed hands pierced the air.

A brass bench was used as a prop along with the floor – an unforgiving contact for the many collapsing bodies.

Spotlights and shadows were deployed to heighten the suspense, while identically black uniforms resonated a sense of imprisonment. This was a striking story of intensity with a never-ending climax.

Made the rain worth it
Watching the pas de deux ‘After the Rain’ elicited the good kind of shivers.

Akua Noni Parker and Jamar Roberts had a natural chemistry highlighted by bold extended lifts; at one point Roberts was holding her with one hand. Parker’s lines were immaculate and her feet pointed a thousand miles long.

The duet was effortless, but tender. It complemented the music by Arvo Part. It was a seamless blend of classical with modern flairs.

The first few songs were characterised by neutral-coloured gowns, grand battements and slow-paced holds. Umbrellas and banners flitted throughout the ‘Wade in the Water’ act and symbolic white costumes prompted a message of purification.

Spiritual spins and upbeat jingles were then replaced with the contrasting dark and fiery ‘Sinner Man’ drama. And then in ‘Run on Rocka My Soul’ a vintage spirit lit up the stage. Traditional suits, bright yellow dresses, and decorated fans twirled about in harmonised fashion.

The musical composition, costumes and set designs were effective additions.

The dancers’ enthusiasm was tangible and they gave an incredibly commendable performance.

These dancers really do break their legs – at least this might explain how they adopted wings and flew across the stage.