 Concert Review: Fun Lovin’ – not so Criminal - The Post 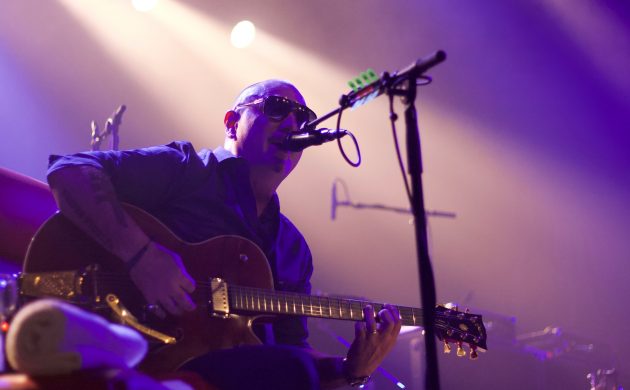 On Friday night Fun Lovin’ Criminals hit the stage at Vega and blasted out a pure nostalgia fest with frontman Huey Morgan in a somewhat philosophical mood.

Morgan, later calling himself a philanthropist, stated that their latest record of covers was on their terms and “for the fans” after they’d been approached to make a new album by a record company (to which their response was translated to “no thank you very much”).

It was a surprisingly intimate gig; the room was dark and moody and on stage you’d be forgiven for thinking that Morgan had kitted it out like a blues room, or maybe his living room?

There’s a small red leather chair with a mic aimed at it, a table with some water and a towel – which was soon to be accompanied by what I presume was cognac or whiskey – while Brian ‘Fast’ Leiser’s keyboard supported an incense stick calmly smoking away and filling the room with middle-aged zen.

When FLC took to the stage in the dark, all of the zen disappeared with booming ‘Pulp Fiction’-fuelled attitude, which at their peak they once oozed in abundance, and a full on rock out took place.

Between spitting bars and philanthropy, Morgan also smashed solos out of the park like a guitar-wielding Babe Ruth from his red chair, which he assured us was there as he had hurt his leg previously.

The New Yorker, in all black and shades, looked like he was performing in a blues bar way back when, or maybe a dive bar in old Brooklyn – and largely the look and feel really worked.

I say largely because it felt like at times the vocals were lost behind the music – maybe due to Vega being half full.

You know how they did it
Their latest album ‘Another Mimosa’ is full of covers aimed at giving a nod of appreciation to music that has influenced them over the years – soul, funk, hip-hop and rock – but it doesn’t really connect like the band’s classics do.

Neil Diamond’s ‘Hello Again’ is a little bit ‘dad’, and the cover of Ice Cube’s “You know how we do it” was both really cool and really awkward in equal measure.

Cover albums tend to be something that bands bring out when they are out of ideas – Weezer have recently done the same – and when you are a band that relied on being edgy, like FLC did in the 90s, new material doesn’t write itself like it used to back in ’90s Brooklyn.

Hello My Friend
Morgan gave a nostalgic nod to his old self when he asked “so what’s up with Pusher Street?” and added: “I know, I know, that po-po is everywhere, but I’m all for that free living.”

The self-professed -King of New York- is a radio DJ for the BBC now with a regular slot on Radio 2, but he still has the smokey, deep, soulful voice, coupled with skill on the guitar to pull off a crowdpleaser.

Huey – along with the sublime drumming of ‘Uncle’ Frank Benbini and the one-man-band Leiser (at one stage I thought he was going to strap Benbini’s kit to his back when he played keyboard and trumpet) – showed real class, and with the stage set up the way it was and the smell of incense, the teenagers of the 1990s in attendance all felt like they were in their living rooms too.