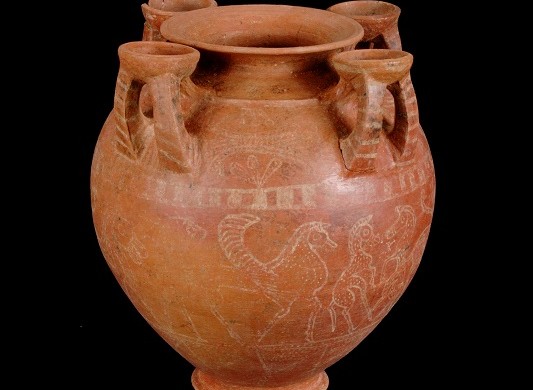 The gates of Rome conceal a treasure that is still not completely unearthed.
Historians mentioned it 2,500 years, but only in 1975 did archaeologists find out where it was located. Since then, the ancient city of Crustumerium has finally started to come to light.

An hybrid society next to Rome
Placed 15 km northeast of Rome, Crustumerium emerged during the 9th century BC. Due to it its location, the city partly controlled the trading route from Etruria to the rest of Italian peninsula. For this reason, Crustumerium became a pivotal point of diversified cultures from Rome, Etruria and Latin tribes.

These heterogeneous cultures affected the religion and funerary customs of Crustumerium. The town was encircled by burial grounds that nowadays are still centres of excavation.

The past is present
The finds of the latest dig in that area are presented at the exhibition ‘Crustumerium. Death and afterlife at the gates of Rome’, which opened in Copenhagen on May 19 at Ny Carlsberg Glyptotek.

The realisation of the exhibition is a result of the collaboration of Soprintendenza Speciale per il Colosseo e l’Area Archeologica Centrale (Italy), the Groningen Institute of Archeology (the Netherlands) and the Ny Carlsberg Glyptotek (Denmark).

With the presentation of ten tombs, grave goods and skeletons, the exhibition introduces visitors to a meaningful past. Each tomb tells a story about the customs and beliefs of Crustumerium.

From graves to tombs
In the earliest phase of Crustumerium’s civilization, its tombs were just small graves laid under earth, but between 730 and 600 BC, the city started flourishing. As a result, the tombs became larger, containing sets of jewellery and an increased number of objects used during banquets or ceremonies.

Witnessing live archaeology
One of the most interesting elements of the exhibition is the laboratory located in the final section, where two archaeologists from the University of Groningen are actually working through unexcavated earth taken from the site, giving a running commentary on their microexcavation. While working, they explain to visitors how they treat and analyse the archaeological finds.

Rather than feeling the distance between a bygone era and today, this exhibition makes the visitor reflect on how timeless the human need to apportion a meaning to life is. Moreover, the complex archaeological operations co-ordinated by researchers from different countries reveal how united we are in our desire to understand where we come from.

Crustumerium. Death and afterlife at the gates of Rome