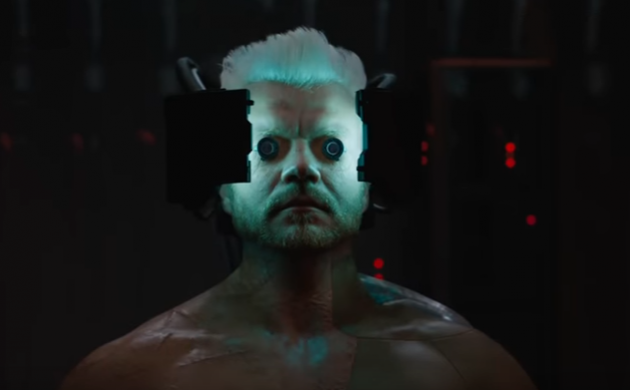 Contrary to what this still from Ghost in the Shell suggests, Pilou is one of the good guys for a change, or is he? (photo: YouTube)
March 31st, 2017 7:00 pm| by Ben Hamilton

When Steve Biko asked an apartheid-era South African judge: “Why do you call yourselves white? You look more pink than white,” he should have added: “Only Michael Jackson can truly call himself white.” Granted, it was 1971 and Wacko Jacko was still at the ABC stage of his career, but there’s a point here: why are there so many people out there who act like they’re qualified casting directors.

In the same way that anyone who’s ever been to school thinks they’re an authority on teaching, it would appear that if you’ve ever made an invite list you could cast a movie.

True, there are mismatches out there we could have helped avoid – Britain choosing Brexit, Trump in the White House, Tori Spelling ever getting an acting job – but save your unequivocal outrage for the things that matter, not a trivial decision to cast an actor.

Unfortunately that advice fell on deaf ears when Scarlett Johansson was cast in the lead role in Ghost in the Shell (Not Released Yet worldwide; released in Denmark on April 6), an adaptation of Masamune Shirow’s manga comic book series, a futuristic tale about terrorists and hackers wreaking havoc with cyber and viral warfare.

Many took to social media to decry the whitewashing of a story set in Japan, while those who had actually read the comics were quick to point out that Johansson is playing a cyborg and has no fixed race.

Likewise, the role played by Danish actor Pilou Asbæk is also non-human. For Asbæk it’s another chance to appear alongside Johansson – half-Danish through her father Ejner, an art historian and documentary maker – following on from Lucy in 2014.

Given his recent ascendancy, this time she might remember his name (but not be able to pronounce it).

Tale of eight Luthers
In Samuel L Jackson’s case, his recent tirade against British black actors playing Americans was no trivial matter – he’s afraid Idris Elba and David Harewood (the CIA boss in Homeland) are going to nick all his roles.

Really, coming from an actor who bullied his way into becoming a Jedi and once even played a Nazi (in the much lamented The Spirit), this was an affront not just to British black people, but the whole profession.

Jackson argued that Daniel Kaluuya (best known for a role as an unorthodox talent show contestant in the first series of Black Mirror), the lead in Get Out (83 on Metacritic; March 30), a horror comedy about a young black man dating a white woman (Allison Williams – Marnie in Girls), would not be able to relate to the material because he “grew up in a country where they’ve been interracial dating for 100 years”.

It’s a baffling claim from an actor who has appeared in British films (wearing a kilt because he insisted) and even TV series.

And he also singled out David Oyelowo, who played Martin Luther King in Selma, a role he played on stage in New York (he can dream, can’t he?) after it transferred from London and the producers dropped the British actor (Harewood in fact) from the production.

But now US producers have more faith, and British black actors are queuing up – because the sad truth is there are barely any decent roles in their home country (despite all the Edwardian Age interracial dating). “You have to change the demographics of the people who are making these casting and commissioning decisions,” Oyelowo told a London audience only last
October.

Meanwhile, we’ll have to put Star Wars actor John Boyega’s response to Jackson’s comments – “Black Brits vs African American: a stupid ass conflict we don’t have time for” – down to Jedi envy.

Eight divided by four
Completing our trio of mismatches is Song to Song (52; April 13), a Terrence Malik film about the music scene in his town of residence, Austin in Texas, starring Ryan Gosling, Rooney Mara, Michael Fassbender and Natalie Portman.

Most critics agree that it’s not a horrible film, but that a director of his calibre should do better, or maybe know better to apply his trademark meditative reflections on nature and individual transcendence to such a vacuous industry.

An eight-hour first cut shaved down to 129 minutes, a shoot that started all the way back in 2012 (but with no aspirations to be a Boyhood), and the complete cutting of several actors and bands (including Christian Bale, Benicio del Toro and Arcade Fire) suggest it’s been a tortuous journey to the screen.

Eight the final straw
Almost as long in the making is the 2015 French-American sci-fi film Creative Control (58; April 20) in which a man uses VR to have an affair with a hologram of his friend’s girlfriend. The biggest mystery is why this has this been picked up.

A safer bet – particularly as its director, Kelly Fremon Craig, cites her biggest influences as the cuddly John Hughes, Christopher Guest, Alexander Payne and Nick Hornby – is The Edge of Seventeen (77; April 20).

A teenage girl’s best friend starts going out with her brother – no, the friend is neither a cyborg, male nor black; no, there’s no meditative reflection. No spins or twists, just thoughtful, humorous scriptwriting from a privileged American white girl who’s been hanging around James L Brooks (As Good as it Gets, Terms of Endearment) and soaking it all up. And it breaks our hearts to say she’s nailed it.

And an even safer bet – if you like crap and you don’t want to be surprised in the slightest – is Fast & Furious 8 (NRY; April 13). Surely it will get to the point when they have enough footage of Vin Diesel snarling and applying the throttle to render his services unnecessary for the next one and just use CGI.

Eight weeks counting
Elsewhere, Smurfs: The Lost Village (NRY; March 30) is mercifully the type of cartoon that is hard to find in English at Danish cinemas, but the more adult-friendly, viewer-unfriendly Boss Baby (55; April 6) should pose no such problem.

Also at selected cinemas, look out for three retrospective documentaries – although aren’t they all? David Lynch: The Art Life (NRY; April 20) was presumably made to whet the appetite ahead of the return of Twin Peaks in eight weeks’ time; The Allins (NRY; April 6) assesses the effect of a young rock star’s passing on his family; while Werner Herzog’s Lo and Behold: Recoveries of the Connected World (76; April 6) applies the same approach to the internet.

No obvious mismatches there, unless we’re talking about the decision to screen so many documentaries at Danish cinemas, particularly as they’ve normally already been on television.