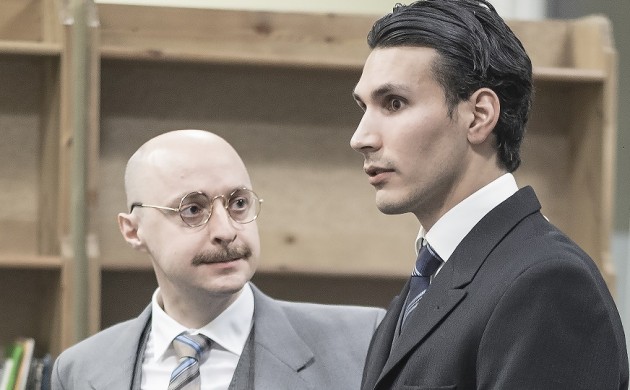 Alan Bennett’s 1986 absurdist comedy centres on the modern obsession with fame and the reader’s tenacious appetite for all the gaudy details of celebrity literary lives.

It sees a long-since-dead Franz Kafka, played by Pejman Khorsand-Jamal (photo right), who also previously starred in CTC’s Beyond Therapy and Pygmalion, and his friend, Max Brod, played by Andrew Whalley, wander into the 1980s suburban Yorkshire living room of Kafka-fanboy Sydney and his wife Linda.

Sydney is far more interested in hearing about Kafka’s familial drama with his father than any of the author’s novels.

Coupled in the comic mix is Kafka’s father who possesses a ‘little’ secret related to his son – one of a very personal nature indeed, and Kafka is terrified it will be unsheathed.

To add to the salacious saga, on his deathbed, Kafka left Brod instructions for all his literary works to be destroyed – Brod chose to ignore his dying friend’s wishes (luckily for us he did), but undoubtedly Kafka isn’t too chuffed.

After his successful direction of The Good Doctor in 2012, Frank Theakston returns to the CTC with this surreal show: a performance that raises a number of significant questions about recognition and will leave you contemplating the price of prestige.

In co-production with the Norwegian National Opera, director Stefan Herheim presents the dangerously sensual Salome, a biblic figure who continue to entice and intrigue the world to this day. (AP)