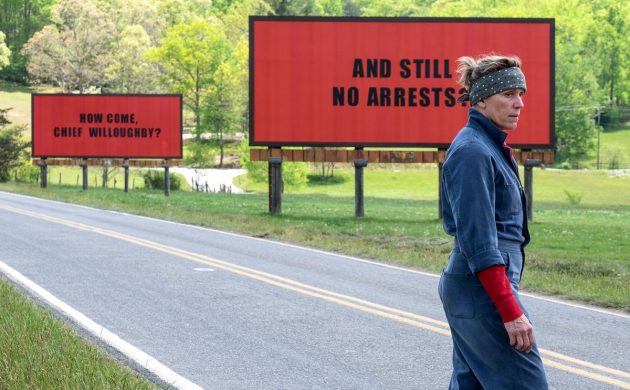 TV is dead. Long live TV. The way we watch it has changed forever and it’s time for us to switch off our TV listings page forever.

It ceased providing listings years ago in a bid to adopt a more relevant format including documentaries and the odd BBC drama you might have never heard of, the big sports events coming up, and all the new US shows you could stream or, legally of course, download.

Given that TV has been bigger than cinema for some time now, we can’t just let it go. We’ll therefore be doing our best to let you know about the new shows coming up on HBO Nordic and Netflix Danmark, as well as DR and SVT. With the titles bolded for a quick, easy read (if you want to avoid all the trivia and bad gags), we hope ‘On Screens’ (previously ‘At Cinemas’) will continue to be of service.

From turkey to triumph
So, heading into January and we’re knee-deep in Oscar territory. Heading the race to win best film is Three Billboards Outside Ebbing, Missouri (released on Jan 11; 87 on Metacritic), and while it’s hard to conceive that a film with such a silly title could win the industry’s biggest prize, they did nearly give it to La La Land last year.

It would mark a huge turnaround for director Martin McDonagh, who followed up on a brilliant debut, In Bruges, with the bafflingly bad, pseudo-1990s screwball thriller Seven Psychopaths. But that’s not necessarily abnormal in Hollywood. Unless you only direct your own scripts, you’re never immune to making a bad film.

In fact, a quick look at Oscar history reveals it’s rule of thumb you make a turkey before grabbing the golden goose. OSS 117: Lost in Rio (The Artist), K-19: The Widowmaker (The Hurt Locker), The Ladykillers (No Country for Old Men), Death Becomes Her (Forest Gump), Married to the Mob (The Silence of the Lambs) and Her Alibi (Driving Miss Daisy) are just six of the many terrible films that directors made before hitting the big time.

Whiff of the Coens
So what can we expect from Three Billboards? According to the Wall Street Journal, it’s “darkly comic, blazingly profane, flat-out hilarious and shockingly violent, not to mention flippant, tender, poetic and profound”, while Rolling Stone hails a “renegade masterpiece that will get you good”.

Central to its power is the performance of Frances McDormand as a mother who erects three billboards to question why the local police aren’t doing more to solve the murder of her daughter. Grief gives way to anger, as a series of mostly violent acts accelerate McDonagh’s adroit script to a pulsating conclusion. It’s as philosophical as the Coen Brothers at their best and surprisingly compassionate.

She may have won an Academy Award for Fargo but McDormand has never been better. With strong support from Sam Rockwell, its Oscar favourites tag is well deserved, but with five other films rated 11/1 or shorter, this race is going down to the wire.

Downwards, not sideways
No not Matt Damon’s penis in Downsizing (Jan 18; 63), that’s even smaller after he makes the decision to reduce his height to just five inches in this scifi from the king of dramedy, Alexander Payne (Sideways).

But unfortunately the joke that your money goes a lot further when you can live in a Barbie dollhouse wears thin after a while, and Payne is clearly struggling to decide what kind of film this is.

Sure, it casts a satirical eye at global warming and liberal guilt, but it also gets an uncomfortable amount of comic mileage out of a Vietnamese refugee’s pidgin English – Hong Chau in the film’s standout performance.

Angry, always angry
Eking out every available drop of petrol out of his gig as the go-to angry man in his 60s on a vendetta – providing there’s enough left for some obligatory Molotov cocktails – is Liam Neeson.

It’s got to a point when you could cast him in any mundane profession and the film title would sound menacing. ‘The Milkman’ – the last mistake she made was thinking she could ride on his cart for free. ‘The Airport Car Rental Operative’ – on the journey to Carpark Z, his life changed forever.

In The Commuter (Jan 11; 57), Neeson is asked to help a stranger on a train. You see, there’s the plothole right there. Never talk to strangers on a train!

Fly in the ointment
And never let a Dane choose the English film title. Danish director Per Fly has made a thriller that looks wrong on so many levels – Backstabbing for Beginners (Jan 18; Not Released Worldwide) is a title right out of the late 1980s.

The career of Fly, one of Denmark’s most talked about directors ten years ago after the likes of Drabet and the TV series Forestillinger, has stalled of late with forgettable English-language fare.

Ben Kingsley is involved this time around, along with a teen heart-throb from the sub-par Divergent Series, but we’re not holding our breath if Fly wrote the screenplay.

Like it says on the tin
Finally, the last of the new releases, Wonderstruck (71; Jan 18), has received positive reviews.

Acclaimed director Todd Haynes presents interlocking tales 50 years apart in which two children try to solve what appears to be the same mystery.

IndieWire applauds “a soul-stirring and fiercely uncynical film”, while The Hollywood Reporter was full of praise for an “uncommonly grown-up film about children, communication, connection and memory”.

Strong TV line-up
So, what’s out there in TV land? Series wise, we’ve got three that might be worth checking out.

Hard Sun (SVT1; Jan 14, 22:00) is a pre-apocalyptic series crafted by Neil Cross (Luther), which made its debut to acclaim in the UK over the weekend. British teen dramedy series The End of the F***ing World (Netflix since Jan 5) received rave reviews when released in October – the US-style production quality is evident from the moment it starts. And The Chi (HBO Nordic since Jan 8) immerses us in life on the South Side of Chicago – early word is promising.
Meanwhile, the first episodes of 2016 British crime series Maigret starring Rowan Atkinson and 2017 crime series Prime Suspect 1973 are both now available to stream on DR TV, while the 1990 version of The Handmaid’s Tale is doing the rounds on DRK.

But whatever you do, avoid the new Will Smith film Bright (29; released on Netflix). It’s a film so risible, Hollywood executors are falling over one another to enlist its director to deliver at the 2019 Oscars.