 On Screens: Vampires who suck blood, balls and ideas - The Post 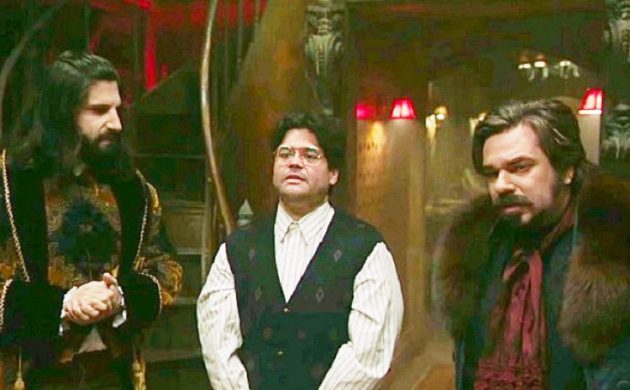 In 2012, when Xinxin Ren Gudbjörnsson, a Chinese expat living in Denmark, told experts about her idea to spend just 600 kroner on producing a sitcom about vampires sharing a house, the reaction wasn’t good – and it wasn’t just because everyone was sick of shows about blood-sucking layabouts who were born in 1672 and had never thought to use their 99 percent immortality to help humanity in the slightest possible way. Or because it generally sucked both blood and balls.

READ MORE: Mission Impossible: How to make a TV show for the cost of a Tom Cruise poster

“Can’t be done,” they said. She promptly spent her budget on a website and two pairs of fake vampire teeth. The rest, like the show after one season, was history.
Those experts probably choked on their garlic bread two years later when the same concept made it onto the big screen on the other side of the world as What we do in the shadows, this time as a mockumentary with Jemaine Clement from Flight of the Conchords on board.

Given how hackneyed mockumentaries and vampires had become, it was the most unoriginal idea ever, so it’s unlikely they nicked it. Nevertheless, Gudbjörnsson did tempt fate by saying she hoped they would get a global audience. She was right about one thing. “People are pretty busy and shouldn’t have to adapt their schedules to fit TV in,” she told CPH POST in 2012. “Online channels are the future.”

Dumbo’s priceless ivory
With 81 on Metacritic, the TV adaptation of What we do in the shadows (from March 28 on HBO Nordic) has scored five points more than the original, but try setting that target for the makers of the live-action version of Dumbo (Not Released Worldwide; March 28) – the Disney original scored a jaw-dropping 96.
Reuniting Michael Keaton and Danny DeVito for the first time since … ah, should we really be encouraging this schmaltz at the expense of original films queuing up to be made? What are live action versions of The Jungle Book really bringing to the table, other than merchandising possibilities small African countries can only dream of? Resurrecting ‘Big Ears’ is the ultimate elephants’ graveyard.

Talking of cashcows, horror is back in favour, as audiences tend to want their thrills restricted to 90 minutes, not spread over nine seasons, and we’ve got two coming our way this fortnight. From Jordan Peele, the director of Get Out, comes Us (82 on Metacritic; March 21), a film in which a family are terrorised by an all-too familiar foe: themselves!

While Cutterhead (NRW; March 21) is set deep in the bowels of the ongoing Copenhagen Metro construction, and most of the dialogue appears to be in English, albeit it with a strong Polish accent. Claustrophobia alert – it might put you off enclosed spaces for life (and in death).

Don’t tell Rourke, but they’ve made a film about a band in the 1980s and not found room for a black or Asian actor in one of the leads! And to make it worse, they’ve chosen a couple of Brits: Douglas Booth (that smooth bastard in The Riot Club) and Iwan Rheon (that total bastard in Game of Thrones) to play two of Mötley Crüe’s founder members in The Dirt (NRW; Netflix from March 22).

The Brit invasion continues with Charlie Hunnam – he can’t do London accents, but he’s okay in LA – who is teaming up with Ben Affleck, Oscar Isaac and Pedro Pascal (Narcos) for Triple Frontier (62; Netflix on March 13) a thinking man’s answer to The Expendables.

And finally The Highwaymen (50; Netflix on March 29) is a welcome spin on the Bonnie and Clyde story that tells it from the perspective of the Texas Rangers (Kevin Costner and Woody Harrelsen) who killed them.

Creepier than Carrie’s mom
Returning to TV land, the pick of the fortnight has to be The Act (March 21 on HBO Nordic series), a limited series depicting the harrowing case of Gypsy Blanchard, a teenager whose mother had Munchausen syndrome – the rare condition in which a carer claims her patient has non-existent diseases. Playing her mother, Patricia Arquette (on a roll after Escape at Dannemora) is reminiscent of Piper Laurie in the original Carrie – and we know what happened to her! Who said horror couldn’t work over a long prolonged period …

The latter means it is a busy moth for Idris Elba, who is fronting the silly looking Turn up Charlie (March 15 on Netflix), in which he plays an accidental male nanny who want to be a DJ.

If his talents are being wasted, Ricky Gervais will know how he feels, although he only has himself to blame, as he writes and directs After Life (57; on Netflix since March 8), a show mostly bereft of both situation and comedy, which is mostly dead on arrival.

He was the king of the mockumentary long before anyone thought of doing it with vampires, but the longer his barren patch continues, the more we suspect he was a mere leech on Stephen Merchant’s extremely long neck.