 Opera Review: A kind of magic alright - The Post 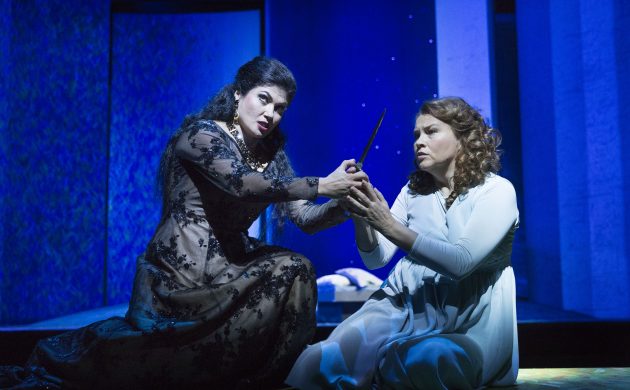 Once again, the Copenhagen Opera has left audiences laughing, crying and on their feet with its production of Mozart’s ‘The Magic Flute’ (‘Die Zauberflöte’).

This opera has been mesmerising audiences since its premiere in 1791, and the Copenhagen Opera took this incredible creation to a new level with its modern twist and underlying political messages.

Fourth wall breakage renders a magnificent effect
The opera has a pretty simple plot. Pamina is captured by the high priest Satasto after her father’s funeral. Her mother, the Queen of the Night, then persuades Prince Tamino, who is accompanied by his comic side-kick Papageno, to rescue her daughter and prove his worthiness.

‘The Magic Flute’ is one of the few operas that truly ends happily ever after, and there was a simplicity in this staging that echoed the saying ‘more is less’. There were wall structures that rotate on a circular platform. In each scene, the lighting and rotation of the stage created an entire new feeling. The happier the moment, the brighter the lights and colours became. When there was an ominous feeling in the air, the lighting dims and stage became dark and grey. Overall, the staging and setting was creative and enhanced the performance.

Director Marco Arturo Marelli pushed boundaries by breaking the fourth wall. There was a mini stage that circulated under and around the top of the pit orchestra. Characters would use this stage to interact on a closer level with audience members. It was awesome to have the Queen of the Night standing in what felt like the middle of the audience while she was singing her famous song, just as it was incredible to have Papageno prance around this area of the stage to create more audience interaction.

Mesmerising and enchanting performances
The entire cast was spectacular. Soprano Vassiliki Karayanni blew the audience away with her high notes as the Queen of the Night. Prince Tamino, played by Gert Henning-Jensen, was charming and had the most wonderful voice. Simon Duus as Papageno was absolutely hilarious and brought the show to a new level. Gisela Stille as Pamina was enchanting and perfectly cast. The Three Child-Spirits, who were incredibly talented young boys, not only saved Papageno and Prince Tamino in the storyline, but also stole the show!

The costumes really made a statement. Unlike how it would have been portrayed back in 1791, the Queen of the Night’s cohorts, the ‘Three Ladies’, were bold, beautiful feminists! While they wore traditional corsets and dresses, the dress was cut completely open at the front so one could see they were wearing trousers! Their stage presence throughout the performance radiated a political statement that aligned beauty with current events. It was eye-opening to hear the lyrics of the past with this new feminist twist as it proved that traditional ways are adaptable.

As always, the orchestra was phenomenal and did not miss a single beat. The Copenhagen Opera’s version of ‘The Magic Flute’ is definitely a wonderful way to spend a fancy night out.