 Performance review: A classy study of physicality and sexuality - The Post 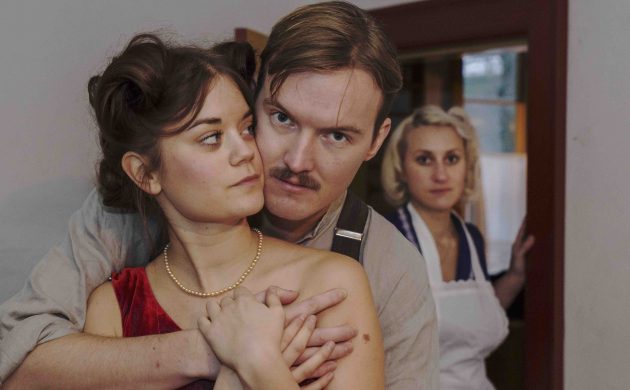 Embrace the energy of this scintillating play and you’ll be rewarded (photo: Thattheatre.com)
February 28th, 2017 7:30 pm| by Ben Hamilton

Benjamin Stender’s accent certainly has an interesting bouquet. Hints of Kentish and Cornish, and also an unmistakable Irish aroma – yes, definitely the dulcet tones of Jonathan Rhys Meyers from the Woody Allen film ‘Match Point’ and the occasional Littlefinger whisper from ‘Game of Thrones’.

But while British Isles viewers of  ‘After Miss Julie’ – a compelling examination of class and humanity set in Britain just months after the end of World War II – might initially think they’ve gatecrashed the filming of a Benneton advert at the European Parliament (neither of the female leads manages to completely conceal her Danish roots), this was another extraordinary That Theatre production at Krudttønden.

READ MORE: At the crack of dawn, they woke up to a new world order

The chauffeur, the maid, the lady
Following on from his directorial debut in the autumn of 2015 with the energetic ‘Marathon’, overall That Theatre governor Ian Burns has assembled another young cast bursting with vitality, and their endeavour is no less vigorous, albeit more arduous.

Benjamin Stender – quickly emerging as Burns’s go-to leading man following standout performances in ‘The Woman in Black’ and ‘Marathon’, and also as a splendidly malevolent Hamlet at Kronborg Castle last summer – is the chauffeur stuck between the motherly affections of his doting fiancee, the maid (Johanne Wang-Holm), and the amorous advances of the lady of the house, the eponymous Miss Julie (Maria Winther Nørgaard).

Masterclass in physicality
A moustache borrowed from Errol Flynn doesn’t quite suit Stender, an actor who will never be short of female fans, but it’s effective as it nullifies his good looks, and this is key to his performance.

Initially, he cuts an unimpressive Uriah Heep-type figure: servile, self-serving and most probably in aftershock following his service in World War II, which was cut short due to his weak chest. But having sex with the lady of the house lets off an incendiary device that explodes his ego, not dissimilar to the one that is going to bring down Winston Churchill’s government and empower a whole nation at the 1945 General Election, the backdrop of the play.

When he emerges post-coital midway through the play, it is as a man transformed. No longer a wheezy weed with an ill-advised moustache, he exudes sexuality through every pore, whether he’s on the attack, getting slapped or being genitally poleaxed – all choreographed in collaboration with Burns, a master of physicality himself.

Seducing the seducer
It’s a credit to both actors how they convey they’ve just had sex, and the foreplay is pretty sensational as well. Crisp movements, flexed and inclined limbs and once again superb direction combine to involve the audience in the seduction, although it’s never completely clear who’s seducing who.

Central to this is Nørgaard’s enchanting performance as a privileged socialite who cannot clearly see beyond the confines of her cossetted existence. Her misty eyes expertly betray a paternally-born vulnerability, and she is a perfect foil for Stender. Physically they couldn’t be a better match, and when they embrace or kiss, sparks fly.

Wang-Holm, meanwhile, conducts herself at a different pace, anchoring the play in an assured fashion that really makes you believe she’s working in domestic service in 1945. She inhabits the drama’s quieter moments, which stay with you long after the curtain has fallen.

Strong production values
Overall, this is a highly polished play with strong production values that does great credit to Patrick Marber’s 1995 reimagining of August Strindberg’s 1888 original Swedish-set play, which way back then was first performed in Copenhagen at a student union after it was deemed too racy by the theatre.

Background music heightens the tension of the play’s pivotal moments, actors add to the authenticity by wolfing down liver and smoking copious amounts of cigarettes on stage, and a well thought-out stage enhances the storytelling.

A special mention must be made of Mark Jones whose innovative sound design has transformed That Theatre’s productions of late. A couple of years ago, the company invested in new technology, and it’s safe to say it is paying dividends.

Next up for That Theatre is ‘Educating Rita’ starring Burns and the super-talented Dawn Wall this autumn. But who would envy them having to go after Miss Julie?