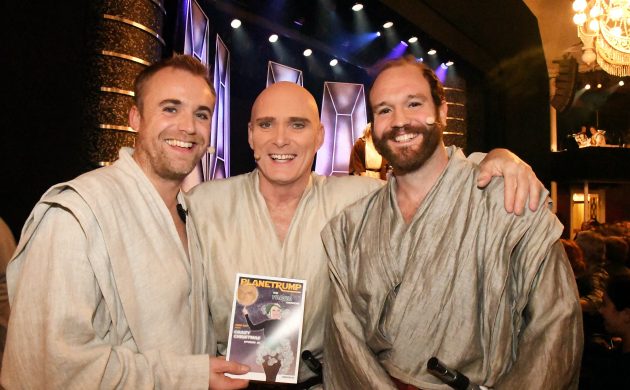 The jedi robes were out in force (all photos: Hasse Ferrold)
December 6th, 2017 6:30 pm| by Magnussen Rassmussen

What do ‘Star Wars’ and Donald Trump have in common? Apart from sounding like the worst possible theme for a costume party, the two would never blend well in any normal context. But these are of course not normal times we live in – some might even say they are a little ‘crazy’! As we approach the festive season once again, it therefore makes perfect sense that these two should form the basis for this year’s Crazy Christmas Cabaret, ‘Planet Rump: The Farce Awakens’. 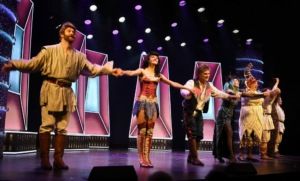 A comedy to sabre
In Episode 35, the audience gets transported to a galaxy far, far away – yet one which is strangely familiar to ours. In this world there is ample room for a hodgepodge of sci-fi references as light sabre-wielding Red Eye knights share the stage with Bladerunners, foul-mouthed protocol droids, Wonder Woman and Bane from Batman.

And last, but certainly not least, we have the yellow-haired, tweeting-obsessed, pussy-grabbing egomaniac. That’s right, Ronald Rump makes a raucous return as villain-in-chief! It seems that Vivienne McKee chose to embrace the dark side of the ‘farce’, but in all fairness who could blame her. He is after all the comedic gift that keeps on giving.

David Bateson is once again tasked with playing Rump, and he’s had a year to perfect his Trump-isms. This truly showed as his rendition of the US president brought the most laughs throughout the evening.

As dependable as Chewbacca
The plot, however, has never been hugely important in these shows – they merely serve as a means to move the action from A to B. The traditions, on the other hand, are one of the main reasons why the audience choose to return year after year. No Crazy Christmas is complete without its Dame for example, a role Andrew Jeffers has played 19 times, and this year he dons one of his most outrageous outfits yet. Think Slave Leia from ‘Return of the Jedi’!

Traditions also stipulate the need for a hero and a damsel in distress. Fittingly the roles have been reversed this year, as the whiny Luke Skystalker, played by Jefferson Bond, is easily outshone by the superb Katrine Falkenberg who plays Wonder Woman. With her powerful vocals it is easy to see why she is picked year after year, as she is the glue that keeps the musical numbers together.

Finally, it wouldn’t be a Crazy Christmas Cabaret without the appearance of McKee’s crowd favourite Dr Van Helsingør from Elsinore. This year he doubles as Red Eye Master Yogurt (complete with green ears and backwards speech), who must teach Luke Skystalker in the ways of the hygge in order for him to defeat the other villain, Darth Visor. This segment of the show brought the most laughs of the evening.

The staying power of Yoda
As the curtains came down on yet another Crazy Christmas Cabaret, we must give credit once more to its creator. Was it the perfect show? No. Did it drag on in parts? Certainly. But don’t forget Vivienne McKee has been writing these shows single-handedly, bringing her unique blend of satire, slapstick and musical entertainment to a Danish audience for more than three decades. It is an astonishing feat of theatrical longevity, and one that may never be bested.

Sadly, all good things must come to an end, and McKee recently confirmed the rumours that the run will probably conclude with Planet Rump. So for this reason I give the show a four-star rating and urge those who can to go and see the crazy gang and laugh with them one last time!