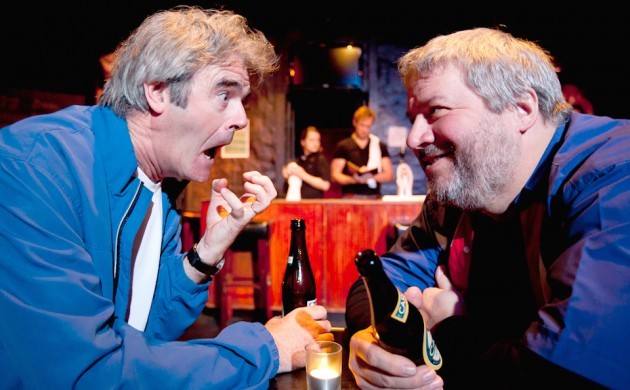 To mark the 400th anniversary of Shakespeare’s death, That Theatre Company is currently restaging its humorous, self-created production ‘Shakespeare Unplugged’ at Krudttønden theatre in Østerbro.

I must admit that so far my personal familiarity with the work of Shakespeare has been limited to a few of his tragedies that I was forced to read at school when I was 15, and schoolwork is seldom a good way to actually generate interest in something new.

Therefore, when I got the chance to go and see this modern fusion of extracts from the most influential playwright in history, I was a little wary that my lack of knowledge would hold me back from being able to appreciate the play. However, that fear rapidly eliminated as I experienced how ‘Shakespeare Unplugged’ can be enjoyed and fully understood by anyone, regardless of beforehand exposure to his plays.

The language and the length of Shakespeare’s plays can render them challenging and problematic to read and understand, but in this self-written performance his words are made tangible, while the main story’s contemporary setting makes the element of Shakespeare an easier mouthful to swallow.

The Bard’s poetic words are woven into a humorous plot concerning that most favoured of Shakespearean themes, miserable love, and applied to dilemmas and situations that an audience of today can relate to.

As the spirit of Shakespeare
It was a very personal experience from beginning to end. The director Barry McKenna had taken the authenticity to a new level by breaking down the fourth wall and placing the audience on stage as part of the backdrop, similar to how it would have been in Shakespeare’s day.

Ian Burns and Andrew Jeffers as the main characters Derek and Jon were energetic throughout, making the audience laugh over and over again with their direct approach to people in the audience who each time were left speechless but entertained.

Don’t leave anyone at home
More or less all of the dialogue was in English, but to make the story life-like, as it was set in a bar in Denmark, some of the bar workers’ dialogue was in Danish as well.

Although the Danish utterances weren’t important to the story, it did add a bit of extra humour if you were able to understand what was said. I as a Dane found it particularly funny how they made fun of some Danish dialects, but to pick that up you probably would have to be quite fluent in the language.

With its amusing action and well-played stereotypical characters, ‘Shakespeare Unplugged’ is suitable for the whole family to watch. Young or old, Danish or not, the best thing about it is that you don’t need to be a Shakespeare devotee beforehand to enjoy it.

Whether you are a huge admirer of the Bard or a rookie like myself, you will enjoy this hilarious, easy-going interpretation of his plays and maybe even walk off with a new-found enthusiasm and passion for the genre.

It was a funny and authentic experience and a great introduction to Shakespeare for both Shakespeare newcomers and experts to enjoy.