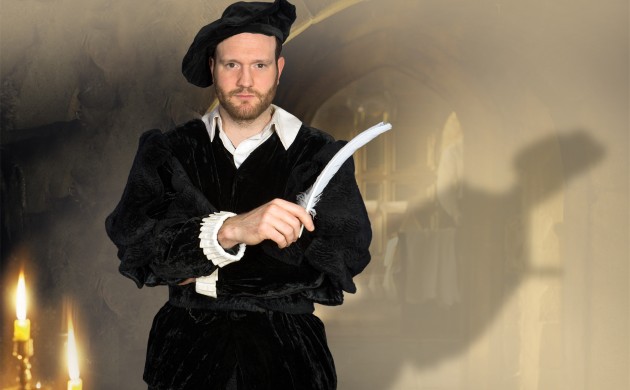 Before you assume a six-star rating indicates ‘Shakespeare’s Ghost’, Vivienne McKee’s new play running at Teatret ved Sorte Hest until March 19, was a faultless drama worthy of the great Bard himself, remember that the Copenhagen English-language theatre scene isn’t Broadway.

We are in the business of comparing like with like, and this original contemporary work was extremely enjoyable and so much more welcome than the late 20th century, already dated dross that passes for theatre on occasion.

It was at times polemical and heavy in exposition, but overall it was a triumph, and a home-grown one to boot.

Our band of brothers
It is with a real sense of privilege that I go to see original English-language theatre in Copenhagen.

I tip my hat to the likes of Ian Burns and Barry McKenna for giving us ‘Shakespeare Unplugged’ and ‘Shakespeare’s Women’ (and in Barry’s case, a few of the earlier CTC pantos) and Jeremy Thomas-Poulsen for his brave adaptation of ‘Pygmalion’ last spring.

But none are as prolific as McKee. She pens a new play every year – the crowd-pleasing Crazy Christmas Cabaret – and she’s been doing this since the early 1980s.

I’ve always found that the more I know about a play, the more I enjoy it. Feeling connected to the writer – in McKee’s case, a foreigner who has immigrated to build a new life in Denmark, whose experience will frequently mirror mine – brings a new dimension to the proceedings.

So it was with genuine excitement that I sat down to watch the third-ever performance of her new play. After all, this very review could, in years to come, be revisited as one of the first of thousands – like the one they always wheel out about ‘Fawlty Towers’ being crap. Immortality beckons!

Genius at the Globe
I was excited in a not too dissimilar way to how audiences at the original Globe must have felt every time a new Shakespeare came out – scarcely able to believe that somebody so brilliant was breathing the same plague and faeces-infested air as them.

But did they really know who the true author of the most influential plays ever written in the English language was, McKee’s play asks, and it certainly makes you wonder why there aren’t more references to ‘Shakespeare the man’ in source materials. For example, it’s common knowledge that ‘Macbeth’ was written for James I, but there doesn’t appear to be anything suggesting the two men shared a bevy in court or anything like that. Any reference is at best vague.

And why didn’t Guy Fawkes plead insanity and blame Hamlet’s regicide for his own attempt to blow up the monarch just two years after Hamlet’s premiere. I jest, of course, but it’s worth considering that history knows far more about Guido the man than Shakespeare.

Walsingham’s ghost
It is with gusto that ‘Shakespeare’s Ghost’ questions the authorship. It takes original documents, including Shakespeare’s 1616 will, and uses them to build a strong case for Christopher Marlowe, Britain’s most celebrated playwright until his untimely death in 1593.

Marlowe and Shakespeare are both characters in the five-act play, which is set in the years of the dramatists’ ‘deaths’, beginning in 1616 with a scene that features  Sir Frances Walsingham, Elizabeth I’s spymaster general who died in 1590.

Hollywood has taken bigger poetic licences before, but it did seem peculiar (it was noted in the program) given how painstakingly the play had been researched.

A hit, a very palpable hit
How McKee must love her Crazy Christmas regular David Bateson. Whether it’s slapstick or high gravitas, the South African journeyman (who has found relative fame in the ‘Hitman’ series of computer games) never turns in a bad performance, which is just as well as she’s entrusted him with three: investigator, orchestrator and perpetrator of Marlowe’s ‘death’.

Given the difference in their social classes, it might have been tempting to make the characters totally stand out from one another, but he resists this temptation, and it’s a stronger overall performance as a result: a masterclass of subtlety and inflection that sucks you into the period.

There is method in ‘t
Equally as compelling is Linford Brown, a British actor I have personally known for about a decade but never seen perform … until now. Wow! His performance as William Shakespeare the yokel, superbly written it must be said, was charming and endearing to the point it made you wish the very best for him.

As Walsingham in the opening and closing scenes, he was all method and timing, conjuring up a portrayal that couldn’t have been more different in age and demeanour. And even his short turn as a con-man involved in Marlowe’s death was intriguing. Initially closed to his environment, the inner workings of a troubled mind were expertly expressed when he was challenged.

The missing quintessence
Bennet Thorpe as Marlowe exudes the same likeable bravado he brings to his Crazy Xmas performances in which he often steals scenes from actors with stronger lines. And likewise here, he’s energetic and entertaining – a box of tricks with never a dull moment.

However, as the central character in this play, I never truly felt this was Marlowe’s story. I felt detached from his fate, unconvinced by his talent and uninterested in his jeopardy. He was, just like in life, outshone by Shakespeare.

The films ‘Shakespeare in Love’ and ‘Anonymous’ had their flaws, but they did succeed in making me believe, however temporarily, that their central character  was the genius who wrote all those plays.

But based on this drama – which was witty, absorbing and extremely well acted, but ultimately failed to deliver on its promise to exorcise the ghostwriter – I’d struggle to believe Marlowe penned his own works, let alone Shakespeare’s.