 Theatre Review: Turning heads and the talk of the town - The Post 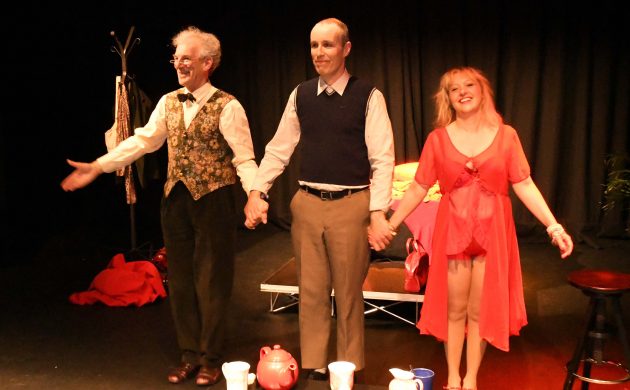 “I just shot a man” exclaims Lesley, an actress whose desperate quest for approval is both grotesque and moving. Performed by Vanessa Poole, Lesley goes on to inform us that the weapon was a harpoon gun, and it is with this curious detail that we are launched into this unique production of Alan Bennet’s ‘Talking Heads’.

Affinity with the material
It’s a rare occasion that a series of monologues, served only by modest (but precisely arranged and coloured) staging, can evoke such a vivid series of images and a rich sense of period and personality. ‘Talking Heads’ was originally conceived in 1989, by playwright Alan Bennet, as a series of 13 episodes broadcast on BBC television over a nine-year period.

What’s striking is this cast’s obvious affinity with the material. Each of the three members give soulful, hilarious, full-blooded performances, perfectly embodying their roles, so as to disappear into them to delicious effect. And this is absolutely by design: in order to adapt the works for a 90-minute stage production, Italian director Annalisa Rossi challenged three British, Malmö-based actors from Playmate theatre to select a single character study from the original series – one that would play best to their individual strengths.

The result being that each role is performed with an immaculate ear for the text by all three players, lending a hyper-real emotionality that, like the heightened social realism of Mike Leigh’s best work, veers toward caricature but never mockery, nor does it fail to hit its mark.

Standout performance
Of particular note was Graham, as portrayed by Robin Gotti, a single, middle-aged man whose stagnation and loneliness is initially attributed to the demands of his overbearing, elderly mother. And yet, when he is unexpectedly unburdened of his duties, by the appearance of his mother’s old flame, he is forced to re-evaluate the walls that have prevented him from living the life he feels he has been denied.

Of the elements worthy of plaudits, the text itself must surely come foremost. Bennet’s wisdom and insight into human behaviour here showcase his wicked sense of irony, forming a landscape populated by detail and nuance, rich in texture and lending an authenticity in language and psychology that immerses us deep in the hopeless yearning of his protagonists.

Guest performance by Playmate at HIT – House of International Theatre on April 27-29, followed by performances on May 5-6 at Teaterhuset Bastionen in Malmö