 Defence minister meets with US counterpart - The Post 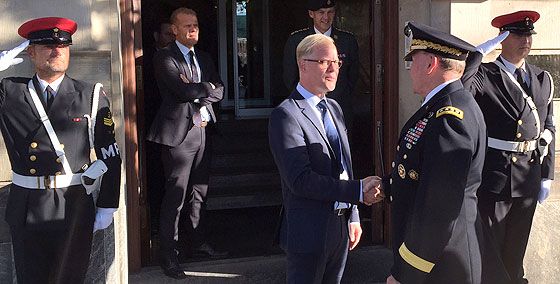 Holst and Dempsey had much to discuss (photo: Forsvarsministeriet)
August 18th, 2015 2:33 pm| by Christian W

The defence minister, Carl Holst, met today with the US chairman of the joint chiefs of staff, Martin E Dempsey, in Copenhagen.

The meeting included discussions about current security challenges, including efforts against jihadist organisation Islamic State (IS).

“During the meeting I had the opportunity to discuss the coalition’s efforts against IS, which Denmark contributes to via our deployed F-16 fighters and the joint training efforts that Danish and US soldiers share in northern Iraq,” said Holst.

NATO implementation
Other issues discussed during the meeting included the implementation of NATO’s Alliance Readiness Action Plan (ARAP), which was ratified at the NATO summit in Wales last year.

The ARAP works to ensure NATO is prepared to respond to new security challenges that it faces on its own borders and beyond.

“The action plan is the biggest reinforcement of our collective defence since the end of the Cold War. And it is my top priority to implement this plan in full and on time,” said NATO secretary general Jens Stoltenberg back in November 2014.