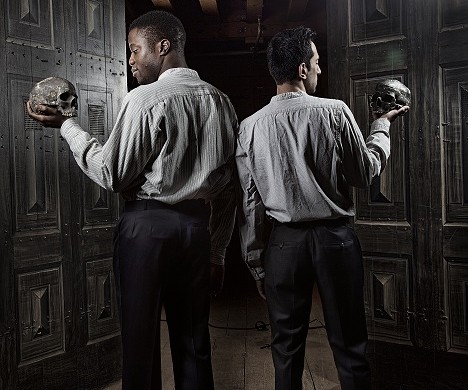 After two years of travelling the world, covering over 308,835 km, the Globe to Globe Hamlet made its way to Kronborg Castle last Thursday, as Denmark became the 195th country on the ambitious world tour.  Helsingør – the true home of Hamlet, Prince of Denmark – was the penultimate stop before ending up back at the Globe in London on April 23, an epic accomplishment for Shakespearean theatre that marked the 400th anniversary of the Bard’s death.

The travelling tragedy
The grand tour saw Hamlet performed across seven different continents, often in unique settings that included the infamous Calais ‘Jungle’ camp, a Greco-Roman theatre and Vatican City. Audiences have included royalty, heads of state and ambassadors – President Obama even caught a glimpse of the drama whilst in London and Poroshenko watched the performance on the eve of Ukraine’s elections.

The great and the good turned out for Hamlet’s homecoming to Helsingør. Queen Margrethe – along with other Danish dignitaries and expats – watched as the famed melancholic prince paced the floors of Kronborg’s hallowed ballroom for one night only.

A simple set, mainly consisting of packing crates and planks of wood that helped form the castle battlements, meant Shakespeare purists were left to appreciate the Bard’s words in their rawest form. The small cast of just 16 actors and actresses rotated and took on multiple roles. This feat of theatrical ingenuity – that saw Queen Gertrude (Miranda Foster) reimagined as a grave digger and Horatio (Beruce Khan) moonlight as Rosencrantz – is a testament to the skills of the seemingly inexhaustive players who were able to switch characters at the blink of an eye.

Play within a play
One of the more striking sections of the drama was the staging of the play within the play. Rather ingeniously, the actors who play Claudius and Gertrude also portray the king and queen on stage as the insalubrious duo fade into the audience out of sight.

The thunderous sounds of a drum beat, meanwhile, kept the players rhythmic chants in perfect time and acted much like an Ancient Greek chorus signalling the impending catastrophe to come.

Phoebe Fildes’ portrayal of sweet Ophelia’s downward spiral into chaotic madness was another standout performance – dressed in the bloodied robes of her murdered father, her love songs proved even more hauntingly powerful.