 Terror suspect on the loose in Aarhus - The Post 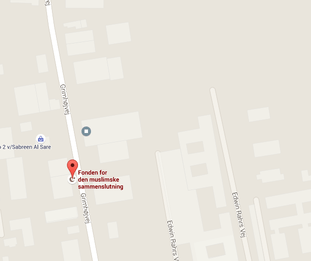 The location of the mosque on Grimhøjvej, supposedly linked to terrorist activity (photo: Google maps)
May 22nd, 2015 1:12 pm| by Pia Marsh

Ahmed Halane – a 22-year-old British national from Manchester, who is suspected of being a terrorist – is “living freely” in Aarhus, reports the BBC.

According to sources, the UK authorities have labelled Halane as a security risk and he is subject to an exclusion order that prohibits him from re-entering Britain. However, he lives in Aarhus and is apparently free to travel around the EU.

Halane is suspected of joining jihadists in both Syria and Somalia, and he is the older brother of Zahra and Salma Halane – both of whom ran away to Syria to become jihadi brides in June last year.

Spotted at a mosque

In recent weeks, Halane has been spotted visiting a mosque on Grimhøjvej in western Aarhus. The mosque has frequently been associated with terrorist activity, with many young Muslims supposedly spending time at the mosque before departing to fight in Syria.

According to the leader of the mosque, Oussama el-Saadi Ahmed, Halane has only started coming to the mosque “in the last 20 days”, reports Metroxpress.

Halane’s Facebook profile also shows him on a street in Gellerup on May 9.

Authorities keeping quiet
East Jutland Police has declined to comment on the matter.

However, according to Metroxpress, Aarhus mayor Jacob Bundsgaard told media: “We are aware of [Halane], but as with anyone, if we cannot prove he has openly committed crimes, then we cannot send him to jail.”